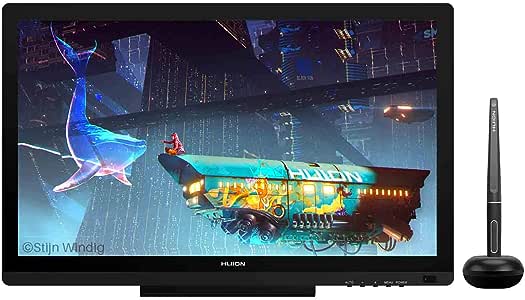 1. Kamvas 20 is NOT a standalone product!

2.0 out of 5 stars
2 out of 5
1 customer rating
How are ratings calculated?
To calculate the overall star rating and percentage breakdown by star, we do not use a simple average. Instead, our system considers things like how recent a review is and if the reviewer bought the item on Amazon. It also analyses reviews to verify trustworthiness.

Martin Tsang
2.0 out of 5 stars Not up to my expectations
9 November 2020
Verified Purchase
The color of the display is dull
Read more
Helpful
Comment Report abuse
See all 1 customer reviews
Write a customer review

Mick Bouschor
5.0 out of 5 stars Affordable Alternative to Wacom Cintiq
31 August 2019 - Published on Amazon.com
Verified PurchaseEarly Reviewer Rewards(What's this?)
The Kamvas 20 is one of the newest pen displays from Huion, and it does not disappoint.
While it is not in the elite “Pro” line of Huion products, it definitely has everything a digital artist needs: 8129 levels of pressure sensitivity, battery-free stylus, glare-free etched glass, generous canvas size (19.5”). The screen is nice & bright, and the drivers were easy to install. I was ready to draw in no time. Also, I was pleasantly surprised that it has tilt support!!

I only have a few cons, and they are not deal-breakers for me. These cons are to be expected when using a tablet that does not have “Pro” in the title . . .
The screen is not fully laminated. There is a small amount of parallax (space btwn the drawing surface and the actual display). But I was still able to draw comfortably and I had total control over my strokes.
Also, even though the pen has just as many layers of pressure sensitivity as all the other tablets, the pen pressure on the Kamvas 20 did not feel quite as nuanced as other tablets I have used. However the pressure curve can be tweaked in the settings panel to your preference.

Overall, I strongly recommend the Kamvas 20. At this price point, you cannot go wrong.

Böhl Family
5.0 out of 5 stars Nice!
29 September 2019 - Published on Amazon.com
Verified Purchase
I got to say I am impressed. I got this tablet because It was 120-170 dollars cheaper than the kamvas pro 20 depending on a used or new version of the later. I was concerned before the tablet came that maybe I should have forked the extra money over. However, I looked in depth at the specs of both. Everything is the same except for a few small things, like the pro having buttons, slightly less parallax, and lamination on the screen (not sure what that means). Otherwise beside those three things, the specs where the same. Same rps, same pen, same pen tilt, same size screen, same resolution, same pen pressure, same color spectrum, etc.

Now, I don't use the button on tablets. I prefer to use the keyboard shortcuts or a wireless number pad. So That gets booted off the list of extras that might make the extra 120+ worth it for me. Next the parallax. That refers to the space between the pen tip on the screen and where the courser shows up on the screen. I was expecting a huge space. I mean right? If this tablet is that much cheaper the parallax must be a bit of a nuisance. My last pc screen tablet, the XP-Pen 22h, had awful parallax. I had gotten it after having a small Wacom Cintiq 13'in because I wanted a larger screen. The difference was was noticeable for me. Annoyingly so. So I was anxious for this tablet. I currently use an Ipad Pro for my portable art. Another reason I was nervous for this tablet The Ipad has next to no parallax and I was afraid that this would just be awful next to that. However, upon comparing them, while there is a small bit of parallax on the Kamvas 20, it's hardly noticeable unless you purposefully look for it. So while I would prefer none, this ain't bad at all! 100 times better than I was expecting. Lastly is screen lamination. The Kamvas 20's screen is matte. That's all I need. I am not sure what lamination means in this context, but as far as I know I don't miss it haha.

So for me I suppose the main decider for me between the two tablets is the parallax really. While I would prefer to have as little as possible, and it sounds like the pro 20 must have less that the plain 20, I can't justify the price difference with that. Maybe if it was only a 25ish dollar difference, I would upgrade. But at this price, (I bough the Kamvas 20 at $400) I just simply can't justify the extra money. Especially since I then used that extra money to order a non-screen graphics tablet from Huion,one of their nicer ones too. This way if I am tired or want my had out of the way of the piece I am painting I can lean back and keep going at it. Had I gotten the Pro, I don't think I would have gotten the graphics tablet. At least not one as nice or effective.

When it comes down to it, I think that this is the best graphics tablet for the price that I have seen, and I am very happy with it. :)

Amazon Customer
5.0 out of 5 stars My HUION Kamvas 20 review for any new artists!
4 September 2019 - Published on Amazon.com
Verified Purchase
Here is my first ever product review for a Huion digital pen tablet. This is over the Huion Kamvas 20 of course. It's an amazing tablet that an upgrade any work space for any designer. The video is a bit rough, but I'll lay out the jist of the deets for you here.

Cons:
A little warm on top of the screen. (wear a nylon drawing sleeve to solve)
Cable management will be a bit hard to handle with three cables attached near the bottom. (Buy longer cables to solve)
No hot keys to use except screen adjustment buttons. (Just slide your keyboard to the left or right to use for any program.)

You can read about my experience at the 3 minute mark. You can see the work I made at the 9 minute mark. And that is about it!

Yes I know the flaws of the editing for the video, but there isn't much to talk about except the price of $499 on their website, but it is better than any $2000 alternative.
Read more
46 people found this helpful
Go to Amazon.com to see all 76 reviews 4.1 out of 5 stars
Free & fast delivery, movies and more with Amazon Prime
Prime members enjoy free & fast delivery, exclusive access to movies, TV shows, games, and more.
> Get started
Back to top
Get to Know Us
Connect with Us
Make Money with Us
Let Us Help You
© 1996-2020, Amazon.com, Inc. or its affiliates