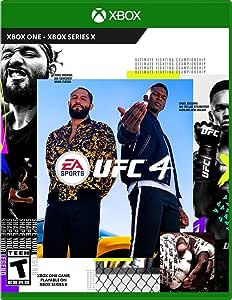 Fastest delivery: 16 - 20 Apr. Details
Ships from and sold by SG-MALL, from outside Singapore. For information about products sold by international sellers, click here.

Frank Castle
4.0 out of 5 stars Not Bad. Not great, but Fun.
10 December 2020 - Published on Amazon.com
Platform For Display: Xbox OneEdition: StandardVerified Purchase
UPDATE: I played the game last night and noticed improvements made. I guess there was a patch. I found many of the fighter faces to be accurate. Unfortunately, some greats are still neglected--Paul Felder, for example. The bodies are still wonky. Except Brock Lesnar. I also felt that the gameplay seemed more fluid and accurate.

The bodies of the fighters are mostly terrible. Not accurate. Bulky fighters are often portrayed as skinny. It's as if the game makers only paid attention to the most popular fighters--Jon Jones, Brock Lesnar, etc. But, for example, Dana White is a fighter. We all know Dana has gorilla arms and a top-heavy torso. This game gave him a body that looks more like Dominick Cruz.

The worst part of the graphics is when the fighters are animated. When they perform taunts or make angry faces. Their faces get pinched into ridiculous monstrosities. They look like scrunched balloon knots. WHY can the programmers NOT make facial animations? This is 2020.

The ground game has been tinkered with to its detriment. Is it terrible? No. Is it dumbed down? YES! UFC 3 had a great ground game system.

The striking is not bad. I have to give this game a thumbs up here.

Now, the WORST part of this game is the career mode. You are forced to listen to your numbskull trainer. So boring. Then you have to plan out each week of training. You have to wait for load screens with fake Twitter posts added for flavor. You have to build hype by streaming training. If you do well and KO your partner, you lose that training aspect for a while. If you do poorly, you get no hype. Either way, the hype only goes up a tiny bit--if at all. Ultimately, it's not fun. The only good part is learning new moves from famous fighters.

Second worst part of this game is the gimmicky backyard and underground fighting rings. The UFC is NOT Street Fighter. The UFC is not a rap video. The sound effects are silly. The outfits are laughable.

On that note, what the HECK happened to the soundtrack!?! It's all rap music, basically. Almost nobody wants to hear that crap blasting in the background. Have the game makers ever HEARD a UFC broadcast? Do they even know the history of the UFC? It's mostly metal and rock. Mixed with the best rap. Not today's crappy rap. At least make the soundtrack half and half. I had to spend so long deleting songs and tinkering with the background music just to enjoy the game. But that's me.

A GREAT change is the addition of Daniel Cormier as commentator. Cormier makes everything fun. His attitude i great. His fight IQ is super high. It's a pleasure to have him replace Joe Rogan. John Anik is great as well.

Karsten Thompson
1.0 out of 5 stars Booooo
22 August 2020 - Published on Amazon.com
Platform For Display: Xbox OneEdition: StandardVerified Purchase
This is way worse than UFC 3 they put about as much effort into it as a Dana White haircut
Read more
8 people found this helpful

Amazon Montana
1.0 out of 5 stars Do not purchase UFC 4
23 August 2020 - Published on Amazon.com
Platform For Display: Xbox OneEdition: StandardVerified Purchase
Do not buy. Dumbest game ever. Stick with UFC 3.
Read more
7 people found this helpful

Bobbie
1.0 out of 5 stars Do NOT buy!
9 October 2020 - Published on Amazon.com
Platform For Display: Xbox OneEdition: StandardVerified Purchase
This game took a week longer to come in then expected. The day I got the game I didn’t even open the package, I took it right to UPS for a return. They have refunded me only $33.00 out of the $63.00 I bought it for!!! Buyer BEWARE
Read more
5 people found this helpful

Amazon Customer
1.0 out of 5 stars No Game Face Feature
19 November 2020 - Published on Amazon.com
Platform For Display: Xbox OneEdition: StandardVerified Purchase
Can no longer play as yourself in career mode you have to spend hours trying to sculpt a charcter that wont look like you. How does a game remove some of the best features? Trash. DO NOT BUY
Read more
2 people found this helpful
Go to Amazon.com to see all 24 reviews 3.4 out of 5 stars
Back to top
Get to Know Us
Connect with Us
Make Money with Us
Let Us Help You
© 1996-2021, Amazon.com, Inc. or its affiliates