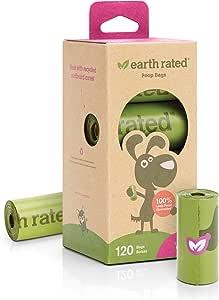 We've got dogs, and we know where your hands are going. We want them to stay safe, clean and poop-free which is why we guarantee our Earth Rated dog poop bags are 100% leak-proof, extra thick and strong!

Even though our bags are super tough, they’re still easy to use so you’re not fumbling around when it’s time for business. When you do head out to bag poop, we recommend matching our refill rolls with our Earth Rated leash dispenser so they're always close by.

The extra details are important to us, which is why all of our packaging and inner roll cores are made with recycled materials. Each dog poop bag measures 9 x 13 inches. They're big enough to fully cover your hand and sleeve during pickup with plenty of room left over to tie a secure knot in the bag when you're finished.

We’ve managed to make these awesome bags because we love dogs and love what we do, so we hope you'll try them and let us know if you have any feedback!

mcr
5.0 out of 5 stars I gave five stars to a poop bag. Enough said.
2 December 2016 - Published on Amazon.com
Size: 120 Bags, 8 RollsColour: Lavender-ScentedVerified Purchase
I never imagined I'd grow up to write reviews of dog poop bags on the internet, yet here I am. I guess when you spend as much time as I do standing outside waiting for your dog to poop while he smells the same spot for 20 minutes, you start to think about things.

First of all, I have a dog who has what I politely like to call "anxious tummy." Sometimes people scare him in my apartment hallway, and he accidentally goes right there on the steps. In this moment, it is SUPER CLUTCH to have an easy-to-open poop bag like this one at the ready. And yes, I've noticed that a lot of poop bags are so hard to get open, which is not ideal when you're trying to clean up an embarrassing mess before your cute neighbor who you saw on Tinder rounds the corner and steps in it and you're publicly shamed because your dog can't handle his bowels.

My dog also prefers the feeling of mulch underfoot as he relieves himself. It's really hard to pick up poop from mulch without also retrieving a bunch of mulch. Wood chips and plastic bags typically don't mix, but these bad boys (or should I say good boys?) are able to handle the mulch without ripping and tearing which is awesome in my book.

Lastly, I don't typically like the smell of fake lavender, but these actually have a really nice scent that does a fairly good job of blocking scent. Great for someone like me who is astonishingly lazy and will put it in my garbage can instead of walking the 500 feet to the nearest doggie waste station. (Don't judge.) VERY IMPORTANT. (See earlier cute neighbor anecdote.)

Jaxdoc
5.0 out of 5 stars Grab those feces with confidence!
22 August 2017 - Published on Amazon.com
Verified Purchase
Is it possible to love a dog poop bag? Heck yeah! I'm a veterinarian and I have tried many brands of bags over the years but since I discovered the Earth Rated Dog Waste Bags I use no other. I use the scented bags because on long walks it kind of disguises the smell of the feces (except those that are really potent), so you don't smell like feces to any passerby. I usually prefer unscented things because I have a sensitive nose and for those inclined, Earth Rated does offer non-scented bags. The Earth Rated bags are also a bit longer than a few other brands though most are similar length. However, the bags are definitely heavier than many other brands and also have way better sealed seams as well as high quality separation perforations. The central cylinder glides easily in every brand of bag holder I have. Lastly, a small but important detail...you know that small piece of tape that holds a new roll together? Most brands use a tape that when you pull it off it puts a hole in the opposing part of the bag if you don't very carefully remove it. A hole at the top of a bag is no big deal but further down can lead to leakage. The Earth Rated tape comes off real nice and my first bag isn't destroyed. Overall a very strong, well made bag that has never let me down. It can hold any load big or small, firm or loose and will not leak or tear.
Read more
427 people found this helpful

madeline audrey
5.0 out of 5 stars Great Bags
14 August 2016 - Published on Amazon.com
Size: 120 Bags, 8 RollsColour: Lavender-ScentedVerified Purchase
I love these bags - much thicker than the ones you buy at the store. The scent is not overpowering.
-----
If you found my review helpful, please click the "Yes" button below! :)
Read more

5.0 out of 5 stars Great Bags
Reviewed in the United States on 14 August 2016
I love these bags - much thicker than the ones you buy at the store. The scent is not overpowering.
-----
If you found my review helpful, please click the "Yes" button below! :)

deanna delgado
1.0 out of 5 stars Not eco friendly
25 September 2018 - Published on Amazon.com
Size: 120 Bags, 8 RollsColour: Lavender-ScentedVerified Purchase
I thought these were compostable. Very misleading & I’m disappointed! I would’ve definitely bought the other brand if I would’ve known. They make it sound like they’re made of recycled materials and biodegradable/compostable of some sort. Yeah ok the tiny core of the roll is recycled. Whoopdy doo. Congratulations on confusing everyone.
Read more
165 people found this helpful

Grace
5.0 out of 5 stars Durable and definitely masks the nasty smells. FYI though, I have a 60lb dog and these bags were too small.
1 May 2018 - Published on Amazon.com
Size: 120 Bags, 8 RollsColour: Lavender-ScentedVerified Purchase
My dearest dog, as wonderful and charming as she is, can drop some gnarly solids where I have to position myself upwind to prevent myself from gagging. With regular bags, I would literally have to hold my breath from the second I would see her begin to squat until I've tossed the waste into the trash. These scented bags are very helpful for when I accidentally get a whif of that putrid stench. They don't mask it completely, but considerably. The lavender scent makes you feel a little less dirty too, considering that you're picking up poop. It'll linger on your hand for a little bit and quickly goes away once you're no longer touching the bag.

The bags are plentiful and fairly-priced. Unless you have more than 1 dog, or have a dog with an insane amount of bowel movement, 120 bags will last you a good amount of time.

I've never had an issue with tearing a bag, even when I've scooped up twigs and rocks - which is a huge plus because the I've never had a good day that starts with my finger accidentally being inserted into a warm turd because the bag ripped. Even when tearing the bag off from the rest of the roll - the perforation works well. It usually requires two hands to detach a bag, but it's never caused me to rip another bag by mistake. They're not difficult to open either - with just a little bit of friction, the edges will come apart. I have yet to come across a buggy one that was sealed on both ends.

The only issue I have is the size. I have a 60-pound dog who likes to drop off the kids at the pool all at once, if you know what I mean - I can bag up all the kids without much issue, but it's a little tricky to knot it closed without worrying about little remnants of kids on the upper portion of the bag. I would say it's a sufficient size for small-medium sized dogs. For dogs (and their poops) that are larger, you might have a little bit of concern. Eventually you'll get a good method that works for you, but this issue could be prevented with a larger bag. It's not a deal breaker for me but if I can find a larger bag that is equally sturdy and odor-masking, I would be willing to try it out before coming back to this product.

Overall, I definitely liked it but I do wish it were a bit larger.

EDIT: Yay! There are larger sized baggies! The seller has informed me of a 11"x13" sized bag that they offer (rather than the 9"x13"). The prices per bag are only about 4 cents apart, and I would very much rather pay a few cents for a bag that'll fit my poochie's poopies a little better. However, the XL bags appear to be rolled into a longer shape than the standard bags, so I'll have to replace my bag dispenser. Fortunately I crochet them myself so it shouldn't be too hard of a task (let me know if you're interested in buying any too). I've changed my original 4-star rating to 5-stars because the item description doesn't specifically say what sized poops it can/can't contain and does specify the size of the bag. It's not the item or seller's fault that my dog's turds are huge.
Read more
135 people found this helpful
Go to Amazon.com to see all 18,729 reviews 4.7 out of 5 stars
Back to top
Get to Know Us
Connect with Us
Make Money with Us
Let Us Help You
© 1996-2021, Amazon.com, Inc. or its affiliates