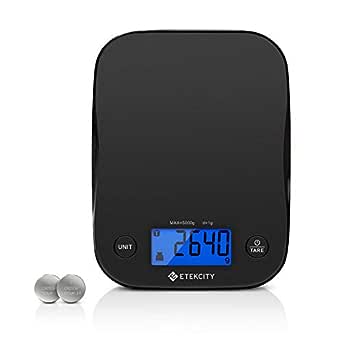 rebecca
1.0 out of 5 stars Defective and NO response.
4 July 2020
Style Name: 1g DivisionVerified Purchase
It could only weigh in oz, the unit button didn't work. I wrote to the seller as I wanted to feedback and see if they could offer some form of partial refund (lazy to return the item, I was making do by converting into oz but it was a chore),absolutely no response from them after weeks and 2 messages. Disappointing.
Read more
Helpful
Report abuse
See all 1 customer reviews
Write a customer review

tqwert1
5.0 out of 5 stars Works great, no problems with not staying at zero, no issues with accuracy
21 February 2020 - Published on Amazon.com
Style Name: 1g DivisionVerified Purchase
I'm extremely meticulous about tracking my calories on a daily basis. Everything that goes into my body that has calories gets entered into an excel sheet that adds everything up and tracks and graphs calories eaten v. weight v. calculated realized total daily calorie expenditure day-by-day over time. Before I got this scale, an annoying issue I had was how rough some of the numbers I was putting in were. It probably didn't matter much as long as errors were at least more or less consistent over time, but it was always a pain and seemed like it was partly defeating the purpose to, say, pick up a banana and then try to decide whether it belonged in the small, medium, or large category. I also noticed that for some products, the volume serving size listed on the nutrition label compared to the weight numbers weren't even close. I have no idea how Kellogg's is measuring cups, but I always noticed that the cups per package they claim is far from being correct, and I can now confirm after using this scale that the grams they are claiming per cup is not even in the ballpark for any cup I've ever poured in a measuring cup. I eat cereal regularly enough that having the calories/protein/carbs numbers be wrong by like 50% with every bowl matters, so this scale really helps with accuracy there and I'm sure for many other products as well.

Now that I have this scale, tracking calories is a lot easier, and I feel more confident that it's also a lot more accurate. Drop a banana on the scale, get the number of grams, enter grams on my spreadsheet. Put a bowl on the scale, press the reset button that puts it back to zero, pour cereal, and count the grams. They even have an option to weigh fluid ounces of milk, so I don't need to use a measuring cup with my coffee anymore. Just put the cup on the scale, set it to milk ounces, pour the milk, and read off the number.

I've had no problems some other reviewers have had with the scale not staying at zero. When I turn it on, it's always at zero. When I put a dish on it and press "tare," it always resets to zero as expected. There were no plastic tabs that needed to be removed from anywhere on the unit before using it, which some reviewers have said they had a problem with. I don't know if they updated the model or what, but the one I got was just about ready to go out of the box, just had to pull out the plastic protector strip from the battery compartment, which took two seconds.
Read more
78 people found this helpful

Joseph B.
1.0 out of 5 stars Cheap but poor quality
1 May 2020 - Published on Amazon.com
Style Name: 1g DivisionVerified Purchase
The scale was accurate for less than 30 days when my tried and true baking recipes started failing. I found that the scale tended to under weigh ingredients. I followed all of the troubleshooting steps in the on-line PDF for the ED8060 and nothing worked. Now the unit button will not work at all. The scale is stuck in the ounce-solids unit of measure and the digital readout constantly changes, never stable. Etekcity's return policy appears to be useless unless you can repackage the scale as it was when originally sent, which I cannot. My gross weight postal scale is more accurate than this product which is supposed to be designed as a kitchen scale. Looks like I bought a $10 scale and got a $2 product. Lesson learned, buy this product if you are willing to gamble your $10.
Read more
35 people found this helpful

Amazon Customer
5.0 out of 5 stars Perfect for the kitchen!
16 January 2020 - Published on Amazon.com
Style Name: 1g DivisionVerified Purchase
Many options for weight, liquid and solids. Was skeptical since I had never used the brand before, but so happy I made the choice to try! Very good size, very good purchase. Definitely recommend
Read more
33 people found this helpful

kathy guerino
1.0 out of 5 stars Frustrating! The manufacturers support link doesn’t work.
5 June 2020 - Published on Amazon.com
Style Name: 1g DivisionVerified Purchase
Can’t comment on scale since I can’t into the battery compartment. The Phillips head screw is so tiny the an eyeglass repair screwdriver is even too big. Such an inconvenience. Not sure why they don’t supply a special little tool or change it to a standard size.
Read more
22 people found this helpful

Jenna Baker
5.0 out of 5 stars Worth It!
16 December 2019 - Published on Amazon.com
Style Name: 1g DivisionVerified Purchase
Amazing little device for its price! Works just as well as most other more expensive ones I have used at family and friends' houses.
Read more
21 people found this helpful
Go to Amazon.com to see all 461 reviews 4.3 out of 5 stars
Back to top
Get to Know Us
Connect with Us
Make Money with Us
Let Us Help You
© 1996-2021, Amazon.com, Inc. or its affiliates