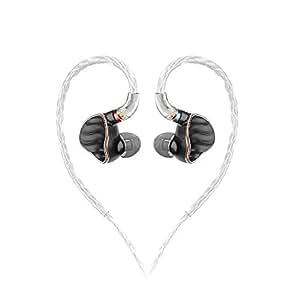 The FiiO FH7 in-ear earphones, developed with great dedication, impress with their top-quality sound and impeccable workmanship. The sophisticated hybrid acoustic design of the FiiO FH7 with five drivers per channel - four balanced Knowles Balanced Armature drivers plus a dynamic beryllium driver, perfectly covers all areas of the frequency spectrum. High and Ultra-High Frequencies: These two ranges of the frequency spectrum are each processed by a Knowles SWFK-31736 Balanced Armature driver. These drivers reproduce the high notes in great detail, without ever sounding sharp and provide a natural, crystal-clear sound. Medium frequencies: These are controlled by two special Balanced Armature drivers, which have been specially developed in close collaboration between FiiO and Knowles. The Standard Knowles 30017 driver has been optimized to give the mids more body for a smooth, velvety vocals and a wide accurate soundstage. Low frequencies: The 13.6 mm dynamic driver is made from the light metal beryllium, known for its lightness and strength for very precise, deep and explosive basses that blend in perfectly with the overall sound.

Valued Customer
5.0 out of 5 starsThese are special earphones
23 June 2019 - Published on Amazon.com
Verified Purchase
I'm not sure how to review these... There aren't many reviews on Amazon for the FH7's (at time of review only two), I feel obligated to leave something here to help. I have the M560's, HE400i's, HD600's, and LCD-2C's. I have used the DAC X6, Loxjie P20, Jotunheim with balanced DAC, and the Monolith THX 788 Desktop DAC/AMP. I got myself sucked into this whole audio mania nightmare... I like looking for new equipment that promises clearer/different sound. Neutral, warm, bass cannon, whatever, I want one of everything. All aside, these on a clean THX amp sound AMAZING. How is it possible to have detailed, clean (so much separation and darkness between sounds), wide sound stage (where is that coming from), IEM's that maintain sub-bass that you just can't believe?! These deliver incredible sounds, directly into your head. I'm definitely not the right person to review these earphones... but for me, having used headphones that cost almost twice as much, I am blown away. These are special earphones. NOTE: using on a phone, without an AMP, produces a MUCH less impressive experience. They're still amazing, for earphones, but on a phone, the above review can not be experienced. Use a clean AMP. PS: MMCX cable provided is AMAZING!
Read more
24 people found this helpful.

Binh
5.0 out of 5 starsIf you're going to invest...
27 June 2019 - Published on Amazon.com
Verified PurchaseEarly Reviewer Rewards(What's this?)
TL;DR: if you have $500 to spend or more, definitely give these a try. For the price, you get fantastic packaging, an amazing wire, easy to drive, so many ear tips that you'll for sure be able to find a fit and a pair of earphones that will make you appreciate and relisten to all your music differently. The FH7's are also great for any genres of music! If you can, running these balanced will impress you even more.

Before I begin, I am a learning "audiophile." I am relatively new, still learning about the nuances of the hobby and community, and developing my ears. However, I used my HD6XX, HE4XX, and modded ATH-M40X, powered by the Mayflower O2+ODAC Rev. B, the FiiO BTR3 (portability), and FiiO M11 (Balanced) to benchmark these earphones and was quite surprised by how quickly I fell in love with these.

Initially, I jumped the gun buying these after seeing the few reviews available on the FiiO FH7. I didn't know what to expect especially after purchasing the FH5 after seeing Zeo's review and was left wanting much more from the earphones, especially in the mids and highs where I felt there was a lack of detail and were not as energetic as I wanted. Also, while the FH5 was okay (in my opinion) I was comparing them to the Sennheiser IE 40 Pro, which had more of the treble I was looking for, with relatively good bass and sub-Bass was decent at most (they were $100); for the price I definitely didn't think the FH5 was better for more than double the price. Thus, my expectations were set to none but to my surprise once the FH7 arrived, I was first shocked by the packaging and what you got, but the sound really blew my mind.

I am (was) a firm believer that earphones could not reach the same level as headphones-bass (and freaking sub-bass), treble, highs, detail, and soundstage. On the first listen, I used Yosi Horikawa "Timbres" and "Bubbles" to test the soundstage and man was I impressed; it was wide enough where everything didn't feel closed in or congested (something I experienced with the Shure SE215). Then, I listened to "Earned It" covered by Cameron Bedell & Megan Davies, which was for details and vocals. At the beginning of the song, there is the strumming of the guitar strings and pluck of the lower bass strings, and there were the immediate clarity and low bass energy I heard and felt. Then the vocals, the crisp sound of Megan Davies voice was amazing, and Cameron's voice had body to it; the whole track had life to it in a different way then I had heard it plenty of times before. Then the tracks I used for separation was "Can't Find My Way Home" by Blind Faith and "That's the Way" by Led Zeppelin. I'm not going to go into complete detail but the separation in "That's the Way" was great, I could pick out each instrument s used (guitar strings in the beginning till the end, mandolin, and the steel guitar fills) and the vocals did not feel recessed or lacking, very much present. "Can't Find My Way Home" by Blind Faith was mostly used for the cymbals crashes and percussion by Ginger Baker, which were excellent and could easily be picked out in the song, in addition to the other instruments being played (bass and guitar); then, there was Steve Winwood's vocals, which much like "That's the Way" by Led Zeppelin did not get pushed back or feel lost. For the last track to test the bass on the FH7's, I used "Américano" by Teo and nothing, ABSOLUTELY NOTHING, that I've heard reached the thumb and fast-hitting bass of these earphones. Period. The bass in this track vibrated in my brain and ears, a surprising but welcomed experience.

The FH7 is one of the best things in audio I've used and heard (so far). They are not sibilant or fatiguing. They are comfortable to wear and could be used for hours on end. I have other headphones and earphones I can use, but I always seem to gravitate to these because they pretty much offer all I can want or ask for my audio equipment. So if you're on the fence about getting these, do it, and you won't regret it, but if there is a possibility you don't like them, Amazon's return policy's got your back.

Paired with a FiiO Q5s is a match made in heaven. Driven by Qobuz on an iPhone XS Max. Must use HD audio to truly tap these. Plugging them into a phone running Spotify will not let you experience what these can do.

I have Beyerdynamic cans, Sennheiser cans and Westone IEMs and the sound from these are out of reach for all but the Beyerdyns. The detail on the top is something to behold. And the comfort will seduce you into very long listening sessions.

Performance well beyond their price range.

Just bought the balanced cable from FiiO for these. If you get these IEMs, you MUST get the balanced 4.4mm cable if you have an amp that supports it. The sound stage opens up by 2x and the sound separation on instruments is easily 4x better. Again, these with a 4.4mm balanced cable, mated to a Q5s running Qobuz studio or sublime will elevate every release you listen too. Even average recordings are renewed. But the good ones, I mean the really good tracks... Well, those become experiments in sound placement you rarely get to hear.
Read more
10 people found this helpful.

Inkey
4.0 out of 5 starsAwesome Sauce.
10 November 2019 - Published on Amazon.com
Verified Purchase
Great, but I think I enjoyed the FH5 more, the bass was better in terms of thumping. Going to buy the FH5 again and do a A/B comparison.

The FH7 is well built and comes with lots of extra's. Cable is top notch, and so is the fit and build of these IEMS.

Highs: Semi bright, by clear and detailed, comparing them to a HD650 they are clearer around the same as HD660's.

Mid's: Flat detailed, sounds the same as any HD6 series.

FH7 are a better ear phone then the FH5 but the FH5 is more enjoyable for hip-hop and anything with electronic bass.

Update: Just got the fh5 in yesterday. Going to do a comparison of the two. Check back for more details.
Read more
10 people found this helpful.
Go to Amazon.com to see all 45 reviews 4.7 out of 5 stars
Free & fast delivery, movies and more with Amazon Prime
Prime members enjoy free & fast delivery, exclusive access to movies, TV shows, games, and more.
> Get started
Back to top
Get to Know Us
Connect with Us
Make Money with Us
Let Us Help You
© 1996-2020, Amazon.com, Inc. or its affiliates