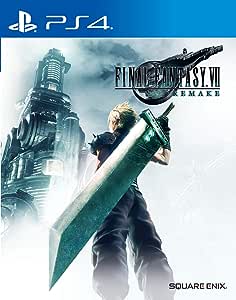 by Square Enix
Platform : PlayStation 4
3.8 out of 5 stars 5 ratings
Only 5 left in stock (more on the way).
FREE delivery: Wednesday, 10 March Details

The world is under the control of Shinra, a corporation controlling the planet's life force as mako energy. In the city of Midgar, Cloud Strife, former member of Shinra's elite SOLDIER unit now turned mercenary lends his aid to the Avalanche resistance group, unaware of the epic consequences that await him.

The world has fallen under the control of the Shinra Electric Power Company, a shadowy corporation controlling the planet’s very life force as mako energy.

In the sprawling city of Midgar, an anti-Shinra organization calling themselves Avalanche have stepped up their resistance. Cloud Strife, a former member of Shinra’s elite SOLDIER unit now turned mercenary, lends his aid to the group, unaware of the epic consequences that await him.

The story of this first, standalone game in the FINAL FANTASY VII REMAKE project covers up to the party’s escape from Midgar, and goes deeper into the events occurring in Midgar than the original FINAL FANTASY VII.

Mako─the lifeblood of the planet and the fuel that powers the city of Midgar...

By exploiting this resource through their Mako Reactors, the Shinra Electric Power Company has all but seized control of the entire world. A ragtag group of idealists, known as Avalanche, are one of the last bastions of resistance.

Cloud, an elite SOLDIER operative turned mercenary, takes part in an Avalanche operation to destroy Mako Reactor 1 in the city of Midgar.

The bombing plunges the city into fiery chaos, and amidst the raging inferno, Cloud is tormented by visions of a bitter enemy long thought dead.

After this hallucination fades, he meets a young woman selling flowers, who offers him a single yellow blossom.

In that instant, a host of swirling shadows surround them.

Once more begins a story that will shape the destiny of an entire world.

3.8 out of 5 stars
3.8 out of 5
5 customer ratings
How are ratings calculated?
To calculate the overall star rating and percentage breakdown by star, we do not use a simple average. Instead, our system considers things like how recent a review is and if the reviewer bought the item on Amazon. It also analyses reviews to verify trustworthiness.

Han Phay
4.0 out of 5 stars Wonderful remake of a cult classic
19 May 2020
Edition: StandardVerified Purchase
Having fond memories playing the original FFVII back on the PSone, it was nice returning to the city of Midgar and experiencing some of those pivotal moments in the classic RPG.

What blew me away back then had been the story and characters, which were rich with their own quirks and weirdness. This remake of the cult classic looks fantastic, bringing more personality to the characters we used to know and love.

Gameplay has evolved into an action-focused RPG, with squad based tactics available on command for things like using items or casting magical spells. Although this is merely the first part to an otherwise larger story, it is substantial in length, taking me around 46 hours to finish it.

If you are a fan of the Final Fantasy series, or a newcomer looking to see what the fuss is about, this is definitely a solid title on the PS4 and worthy of a place in your collection. Recommended!
Read more
One person found this helpful
Helpful
Report abuse