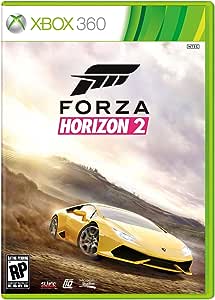 by Microsoft
Platform : Xbox 360
Secure transaction
Returns Policy
Your transaction is secure
We work hard to protect your security and privacy. Our payment security system encrypts your information during transmission. We don’t share your credit card details with third-party sellers and we don’t sell your information to others. Find out more
In stock.
Arrives: 2 - 6 Feb. Details
Ships from and sold by WorldWide Dealer, from outside Singapore. For information about products sold by international sellers, click here.

Race through a massive wide-open world with friends in the ultimate celebration of speed, style, and action-packed driving. Explore beautiful and exotic locations in more than 200 of the world's greatest cars, all created with precise detail. A world of beauty and freedom awaits.

Explore a Massive, Living Open World - A world of beauty and freedom awaits.

Action-Packed Driving - Take risks and earn rewards for showing off your driving skills and style.

Your Ultimate Car Fantasy - Drive more than 200 of the world's greatest cars.

The Horizon Festival invites you to join its celebration of cars, music, freedom, and fun on the world's greatest roads. Get ready for the road trip of your life!

Race through a massive wide-open world featuring dramatic weather and day-tonight cycles. Instantly connect with friends in the ultimate celebration of speed, style, and action-packed driving. Explore beautiful and exotic locations in more than 200 of the world’s greatest cars, all created with precise detail in stunning 1080p.

Race through a massive wide-open world with friends in the ultimate celebration of speed, style, and action-packed driving. Explore beautiful and exotic locations in more than 200 of the world’s greatest cars, all created with precise detail.

just me
4.0 out of 5 stars Great game!
12 June 2017 - Published on Amazon.com
Platform For Display: Xbox 360Edition: StandardVerified Purchase
It has a few weird bugs in it. The navigation system tells you to turn into roads that don't exist, for one. It seems like this game was made for the Xbox one, and toned down to work on the 360, but the whole thing was done as an after thought, just a few days before it was released. It also lets you drive anything, in any race. Sounds like a great idea, but it lets you cruise thru the game very quickly. The first game made you have certain cars to enter events, which made you have to earn enough to buy them, before you could enter the race. This kept the game going longer, before you got to enter the final race, and kept you more interested in playing.
You can start and finish this second version in one day of game play, or in about a week of just a hour a or so of game play a day.
Fun game and worth playing. But I can't give it five stars.
Read more
2 people found this helpful

Steven Smith
2.0 out of 5 stars Not as good as previous Forza Series Games, Full of problems and Glitches with no support.
28 December 2014 - Published on Amazon.com
Platform For Display: Xbox 360Edition: StandardVerified Purchase
If you are a fan of the Forza series such as Forza Motorsports 4, or Forza Horizon first release, you will not be as pleased with this release for the Xbox 360. It has less content than the original Forza Horizon. Second, Turn 10 / Microsoft Games / Sumo Games who were all involved with this game is not supporting the game. There are several issues and glitches with the 360 version. Also, there will be no download content for this game, and no further Car Packs are scheduled for this game as was in the original release. So basically, if you purchase this game.......that is what you get. As of today 12/27/2014 they have not released but one patch for this game and no glitches or issues with the game was addressed. I bought this game when it was first release and have been following it closely to see if they would fix any of the errors. Also, if you look at most of the reviews for this game, especially on youtube, they are mainly for the verson released for the new console Xbox One. The version for the 360 is no where near as polished. To sum it up, unless they really drop the price on this game, I would not recommend it, not at full price.

If you want to see what others who have purchased this game think, go to this link. Also the one below it has other posts topics

Amazon Customer
5.0 out of 5 stars Are the graphics as good as xbox one
4 February 2016 - Published on Amazon.com
Platform For Display: Xbox 360Edition: StandardVerified Purchase
Are the graphics as good as xbox one? No absolutley not, are they still good? Yes theyre still pretty good for a 360 game.The gameplay is awesome, more cars than you could imagine, unlimited customization combinations. Barnfinds are sick and you get to do pretty much everything on xbox one version just in a lower resolution. Best 35 dollars ive ever spent
Read more
8 people found this helpful

Colton
2.0 out of 5 stars Huge dissapointment...
26 December 2014 - Published on Amazon.com
Platform For Display: Xbox 360Edition: StandardVerified Purchase
The first horizon was a much better game by a long shot. In this one the graphics are okay, I've seen much better graphics on the 360. I think the graphics in the first game were better. , on this version everything feels a bit unrendered and bland. The graphics in this game are quite different from the first game as well, you see a lot more reflections on your car and the colors are slightly darker and more vibrant. This SOUNDS good but when at dusk or dawn everything is all dark and has a lot of glare. And at night you see EVERYTHING reflect off your car which is cool but not realistic. The car control in the game is not NEARLY as realistic as the first game, the first horizon had a perfect mix between an arcade and a sim, this one however, it doesn't have that mix right, you get the worst parts of each. As far as bugs go....... THIS GAME IS TERRIBLE WHEN IT COMES TO GLITCHES... In the final race in one of the corners, if you take it wide you hit an invisible wall that pops up out of nowhere and occasionally fall through the ground, the driving line is completely useless... It's completely inaccurate more often then not. Most of the time it tells you to brake way to early or WAY to late. And many times it starts telling you to brake and then starts to tell you to swerve left and right until you lose control, this affects the AI drivers a lot which makes winning the final race much to easy. There are many buildings that have parts that can be driven through, one that is floating in the air. And every once in a while your car will begin to bump around and waddle and then you will lose control (This usually only happens in low AWD cars though). As far as the storyline goes, well...... It sucks terribly compared to the first game. You have to feeling of accomplishment like you do in the first game. In the first game you can become the most popular driver, race famous drivers, race for pinkslips, etc. But in this game, the classes are designed so you never actually have to buy a fast car. You could literally beat the main storyline by just driving a bone stock Fiat 500. And probably the biggest problem of all is how difficult it is to make money! SPOILER ALERT: By winning the Horizon final in the first game you get 5,000,000 CR in the second game you get 27,500 CR!! WHAT THE HECK WERE THEY THINKING!? In conclusion, I like this game, but Turn 10 and Playground Games should NOT have let Sumo digital (Who I had never heard of until now) make another one of their games. They had so much to live up to with the first Forza Horizon that this game was bound to flop (At least on the 360) So would I recommend this game? Not really, but it's not entirely intolerable.
Read more
5 people found this helpful

Sara Spears
4.0 out of 5 stars hours of open world game play
26 March 2015 - Published on Amazon.com
Platform For Display: Xbox 360Edition: StandardVerified Purchase
This game is pretty legit because you can customize your car down to the slightest details. It also drives like a real car would so you can a feel of simulation driving. The graphics are great, my boyfriend beat this game in about 2 weeks but it has an open world driving experience so it offers hours of play. Only thing I was disappointing was that it doesn't have the same features as the Xbox one game. Was really hoping to have weather variations in the game.
Read more
2 people found this helpful
Go to Amazon.com to see all 347 reviews 4.1 out of 5 stars
Free & fast delivery, movies and more with Amazon Prime
Prime members enjoy free & fast delivery, exclusive access to movies, TV shows, games, and more.
> Get started
Back to top
Get to Know Us
Connect with Us
Make Money with Us
Let Us Help You
© 1996-2020, Amazon.com, Inc. or its affiliates