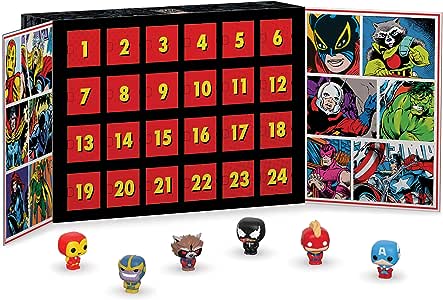 Add to Cart
S$63.75
+ FREE Delivery
Sold by: greatamznseller
Have one to sell?
Sell on Amazon

This calendar is a heroic celebration of the holidays. It comes with Avengers to Guardians, villains to anti-heroes. 25 surprises even on christmas day.

Krista Fouquette
5.0 out of 5 starsMini character for every day
18 September 2019 - Published on Amazon.com
Verified Purchase
Great item. Looks nice closed and opens to show comic book style pictures. One mini character for each day in the calendar.
Read more
73 people found this helpful.

Tiff G
5.0 out of 5 starsAwesome Advent Calendar ft. Mini Pops
15 September 2019 - Published on Amazon.com
Verified Purchase
You essentially get 24 mini pops. It arrived today for my nephew, and I’m really impressed with the value. Lots of detail for something so small. A must-have for marvel fans!
Read more
42 people found this helpful.

Ben Belden
4.0 out of 5 starsHad To Take The Packaging Apart
16 September 2019 - Published on Amazon.com
Verified Purchase
I was buying this calendar for myself and decided to open all of the calendar spaces at once. I opened door 1 and was immediately disappointed that there was nothing inside. I opened door 2 and did find a figure inside. I continued opening the rest of the doors and found that doors 7 and 19 were also empty. While I was initially upset that I was missing 3 figures, after opening the left side of the packaging I found the missing figures stuck outside the plastic container but still there.

The figures themselves are great. There’s a nice assortment of characters, mostly the ones you would expect but a few surprises as well. The characters are even smaller than I thought, they are just over an inch high, but they are detailed and colorful and immediately identifiable.

Erika
5.0 out of 5 starsUPDATED Review: Love it!!!
15 September 2019 - Published on Amazon.com
Verified Purchase
UPDATE: Correct item received the second time around! Absolutely love it! I can't wait until December to open this with my son. Excellent quality!

Original Review: So I was super excited to receive this advent calendar since my son is a huge Marvel fan and I know he is absolutely going to love the little daily surprises. Unfortunately, we received the Harry Potter version instead!!
The label on the outer box clearly states "Marvel 80th Anniversary" so not sure where/how the mix up happened. I'm going to reorder the Marvel version and hope I get the correct item in a couple of days! If it's anything like this Harry Potter version, it looks like it's going to be a high quality item. This one came very well packaged and looks great. Will update to 5-stars once I receive the correct item!!
Read more
17 people found this helpful.

Heather Houston
4.0 out of 5 starsMostly Good, only small peeves
8 October 2019 - Published on Amazon.com
Verified Purchase
Well it's good and meh at the same time.

PROS: The figures are small but the details are awesome.

CONS: The selection. The red and blue spiderman is in the box as is the black suit one. There are two versions of venom. Groot is angry looking. Black Panther is completely missing - not one character. Out of 24 characters four of them are female characters (None of the women from Black Panther or the Guardians of the Galaxy). And there are characters that are not truly a big part of the MCU for current fans - ie. Daredevil. Also, would it have hurt to put the character names in their slots?
Read more
15 people found this helpful.
Go to Amazon.com to see all 423 reviews 4.5 out of 5 stars
Free & fast delivery, movies and more with Amazon Prime
Prime members enjoy free & fast delivery, exclusive access to movies, TV shows, games, and more.
> Get started
Back to top
Get to Know Us
Connect with Us
Make Money with Us
Let Us Help You
© 1996-2020, Amazon.com, Inc. or its affiliates