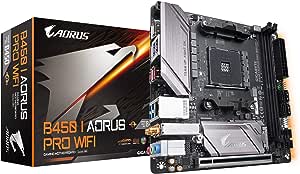 by GIGABYTE
5.0 out of 5 stars 1 rating
Secure transaction
Returns Policy
Amazon Delivered
Your transaction is secure
We work hard to protect your security and privacy. Our payment security system encrypts your information during transmission. We don’t share your credit card details with third-party sellers and we don’t sell your information to others. Find out more
Amazon Delivered
Amazon directly manages delivery for this product. Order delivery tracking to your doorstep is available.
New (7) from S$190.79 + FREE delivery

herbert Ang
5.0 out of 5 stars Best B450 ITX board with RGB
18 February 2021
Pattern Name: MotherboardVerified Purchase
Great ITX board with 3700x.
No issues so far. Nice ARGB software.
Read more

Cons:
- Stock "Auto" settings for CPU and SOC massively overvolt, generating extra heat and power fluctuations
- SOC VRM buzzes whenever iGPU is under load, gets louder when overclocked
- Moderate SOC voltage (1.175) leads to VRM temps in the 90C range, causing power draw to increase
- Flashing motherboard with Gigabyte @BIOS utility bricked board, requiring replacement
- 8-pin CPU power socket in an awful location, making it difficult to unplug without pulling out the whole board

Other Thoughts:
Note: This review is based on having two of this board, both exhibiting all of the same issues.

If you're planning on using this for a CPU-only build, you'll probably be fine. But I would not suggest putting an APU on this board, especially if you plan on overclocking it, until Gigabyte either revises the board or fixes the voltage control issues with a BIOS update. My 2400G APU pulls over 120W on stock motherboard settings during Cinebench and Blender testing, immediately causing the CPU to throttle even with aftermarket cooling. Core voltage was measured at over 1.4V, which is an insane amount of voltage considering stock voltage is 1.225!!! The GPU/SOC voltages suffered similar problems, with stock settings causing offsets of +.05-.1 volts (which is a lot considering recommended SOC range is 1.05-1.2). With a 150W 80+ PSU, adjusting the GPU clocks at all would cause over-voltage protection to trip on the PSU, causing an immediate shutdown. This is unacceptable and is probably the poorest stock voltage regulation I've seen across multiple AM4 mITX boards from ASrock, Asus and Gigabyte.

VRM cooling is also rather poor. Doing GPU only overclocking, I had to limit myself to 1.2V SOC voltage to keep VRM temps below 100C during extended load. Certainly part of this is due to my case being very small, but I ensured that the VRMs had plenty of intake and exhaust airflow to prevent recirculation. This heat and voltage limitation meant that instead of getting 1650MHz on my GPU (tested on a different board to be stable at 1.25V), I had to come all the way down to 1500MHz @ 1.175 for long-term stability. That's a lot of performance left on the table because of insufficient surface area for VRM cooling.

The last annoyance is more of a pet-peeve, but still worth mentioning. When the GPU is being used, the SOC VRMs create a buzzing noise that changes frequency based on framerate, and volume depending on SOC voltage. It's definitely audible outside of the case with the cover on. The noise is evident everywhere the GPU is used, from the Windows 10 start menu (audible click on every single scroll) to synthetic and gaming benchmarks (Fire Strike combined test produces a slow, loud clicking noise @ 6 FPS, Crysis benchmark produces a constant grinding noise @ 60+ FPS).
Read more
84 people found this helpful

Bamzilla
3.0 out of 5 stars Solid gaming mobo....but legendary heat issues.
24 January 2019 - Published on Amazon.com
Pattern Name: MotherboardVerified Purchase
Look...it's a motherboard. Semi-competent manufacturers can make a generally suitable mobo. That being said, this one is good. It's not the best. It's not blowing socks off.

The issues I've had with mine are VRM heat and RGB/firmware issue.

As you can find online in many reviews, this board has a heat issue with the VRM. To mitigate I dissembled the VRM heat-sink, replaced the thermal pads with better pads with a better heat dissipation rating, and made sure the heat-sink was fastened tight to the mobo. Most of the time, people are finding that the heat-sink is just not attached tight enough to make proper contact with the stock thermal pads. But be careful...you can bend the board too much and damage it if you don't know what you're doing.

As for RGB/firmware, interestingly enought this has been the biggest hastle. Let's start simple: RGB Fusion is trash. One of the worst implementations of RGB control I've seen. Second to that, the color calibration on the board LEDs is WAY off since I updated to firmware F6. Now I can't get pure white color. And to get anywhere close I have to skew into the pinks and reds. It's jacked up. Do yourself a favor: use Corsair iCUE for LED control. Unfortunately, you're stuck with RGB Fusion to control the mobo LEDs and LED headers.
Read more
23 people found this helpful

Israel
5.0 out of 5 stars Works for me
7 September 2019 - Published on Amazon.com
Pattern Name: MotherboardVerified Purchase
I dont know what these other guys are crying about. My motherboard works just fine. No overheating temperatures, my 2400g runs just fine. I even managed to get 50+ frames in GTA5 at medium settings.

The NVME ssd does get HOT though so theres that. I do not hear any buzzing noises either.

Good motherboard but just like these other reviews you might be unlucky and get one of those faulty ones.
Read more
21 people found this helpful

Amazon Customer
2.0 out of 5 stars This board is not ready for ryzen 3000
29 July 2019 - Published on Amazon.com
Pattern Name: MotherboardVerified Purchase
By default, this board installs F30 bios in it. Unfortunately, the F30 bios doesn't support the latest ryzen 3000. To use the ryzen 3000 with this board, you need to update bios to F40 or above. To have the F40 installed, you must install three bios, F31, F32, and F40. Note that you must install all of them sequentially. In addition, from F32, to F40, you should also update EC FW Update Tool. Too complicated/annoying already. The worst part throughout this messy installation process was a bug where bios update for F32 fails unless usb disk is not freshly formatted with fat32 and the bios for F32 is not the only one.

anyway, after going through 5 hours struggle, I was managed to install the F40 and able use ryzen 3000 with this board. So, please be aware! This board works good if it works good. :) if you are not willing to update a bios for yourself, please don't buy this board.
Read more
18 people found this helpful

David D
1.0 out of 5 stars My second try at Gigabyte's MB and for the second time it was not worth it
5 November 2018 - Published on Amazon.com
Pattern Name: MotherboardVerified Purchase
So my first Gigabyte MB was for i7-6700k... I regretted the decision instantly and spend more money to get Asus motherboard instead - Asus worked like a charm. This time I have decided to give it a shot for the second time since it is nearly $40 cheaper than similar Asus... and again I regretted that decision - I am not sure what was the problem but for sure the VRM was getting very hot. My PC kept shutting down for no reason and at first I thought that it may be the PSU but my Corsair RM650i has enough power and runs 12.3V no matter how hard it is being pushed so that was not it. Now I have replaced the Gigabyte with Asus ROG B450i and so far not even one isse. There you go... My next motherboard will be asus again - I'd rather spend extra $$ and have it running smooth.
Read more
17 people found this helpful
Go to Amazon.com to see all 133 reviews 4.1 out of 5 stars
Back to top
Get to Know Us
Connect with Us
Make Money with Us
Let Us Help You
© 1996-2021, Amazon.com, Inc. or its affiliates