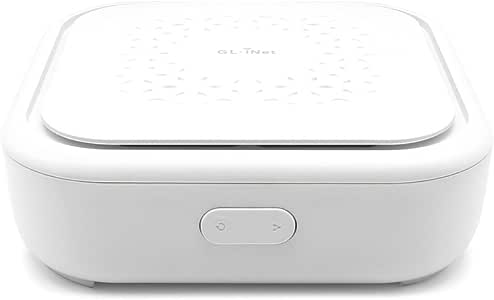 Convexa-B (GL-B1300) is a remarkable OpenWrt gigabit router in order to satisfy the wireless Internet access demand for both commercial and home users. It will be your best choice for enjoying the wireless Internet surfing. Convexa-B is equipped with Qualcomm Wi-Fi SON (Self-Organizing Network) mesh technology to deliver robust and consistent connectivity to your entire space. Multiple units are required to extend the Wi-Fi network throughout your space.

Keeping your Internet connection private with multiple VPN protocol support, Convexa-B provides the best encryption and authentication with OpenVPN. Meanwhile, WireGuard gives the privacy-minded users a fast and simple VPN that utilizes state-of-the-art cryptographic algorithms. With our brand-new Web UI 3.0, you can set up VPN server easily and access your files securely in a remote side as if you are at home.

DNS over TLS is a security protocol for encrypting and wrapping Domain Name System (DNS) queries and answers via the Transport Layer Security (TLS) protocol. The goal of the method is to increase user privacy and security by preventing eavesdropping and manipulation of DNS data via man-in-the-middle attacks.

Refuge Denied
2.0 out of 5 stars Nice Hardware, Very Outdated Stock Firmware
1 September 2018 - Published on Amazon.com
Verified Purchase
First, the hardware itself is really nice. Compact, powerful (for a consumer router), seems to have a solid build quality. Second, for what you are getting they really could charge nearly double the asking price and it would still be worth it ... if they would keep their firmware up to date.

I had plans to downsize my router for RV use as I travel and this unit would have been perfect I think. I am currently using a 6-year old mini pc I built with pfSense. Since I would soon have to rebuild the mini with a more modern CPU that supports AES-NI for newer versions, I thought I would kill 2 birds and just get a compact low-power router that could use open source firmware.

While I suspect/hope GL-Inet has plugged any serious security holes in their ancient OpenWRT implementation, I cannot be sure, so I decided to install the latest generic/vanilla OpenWRT build for this router from OpenWRT's official site
(releases/18.06.1/targets/ipq40xx/generic/glinet_gl-b1300-squashfs-sysupgrade.bin).

Unfortunately, that's where the good times ended. The device seemed to lockup a few times in the first couple of hours of testing. I was getting slower download speeds than I am use to - with the official OpenWRT firmware I was seeing about 250-ish Mb/s, where I usually see ~350 Mb/s. It refused to complete any install of additional software from the repository from the Luci UI. Lastly, after installing additional packages via SSH, the UI would not properly integrate any of the new components, even after a device reboot.

I reinstalled the stock firmware but did not experience the same issues. So I thought maybe I had a corrupted installer for OpenWRT. I repeated the whole process including downloading a fresh copy, restarted the TFTP server, booted the router - same thing ... vanilla OpenWRT installed without issue.

Unfortunately, I ran into the same problems when trying to install or configure additional software. I suppose it could have been a bad build, but I think someone else would have caught that by now since its been available for a few months. It could have been a hardware issue, though it would seem that the stock firmware would have issues if that were the case. Maybe that just leaves user error ...

After a couple of days of fussing around with it, I decided to return it and just spend the additional money needed for a compact pfSense travel router. So disappointing! I wanted this to work so bad. Like I said, the hardware is nice and the GL-Inet firmware had no issues and you can easily access the OpenWRT UI by clicking "Advanced" in the top right corner, I just don't trust the old version of OpenWRT it's based on.

Steve
5.0 out of 5 stars Love this Mesh System
9 April 2019 - Published on Amazon.com
Verified Purchase
I have had very good luck with GL.iNet products in the past, so I thought I would try this Mesh Router. I purchased 2 of the GL-B1300 devices from Amazon. The first thing I did was to upgrade them to the Training Firmware (Should be released GA shortly). Got them paired with each other and that was it. I am actually replacing a $350 Asus RT-AC5300 wireless router with these 2 units. I have had nothing but issues with the Asus disconnecting and then having to reboot just to get the internet connection back. These little routers can handle the same load as my Asus could. I've got about 45 wireless clients and we do a lot of video streaming. I haven't run into any slowdown or issues yet.

Another cool feature is that the 2.6Gz and 5Gz networks use the same SID in Mesh mode and the individual clients determines if they can connect at the higher frequency or not. It also does a good job of connecting the client to the closest AP and seems to spread the load well.

When connecting to the secondary AP, I don't notice any difference in speeds than when I connect to the primary router that is hardwired to the modem. So the mesh mode works pretty seamlessly.

The OpenWRT firmware that is installed pretty much has most of the same features as the ASUS except for an FTP setup and you can only setup one user account for the file share feature.

The only downside is that there are only 2 Ethernet ports per device, so I went out and purchased an unmanaged switch to all for more wired devices but you can get one of thus for around $20.

They have a very good support forum and had most all of my questions answered there. So definitely pleased with my purchase and will be keeping an eye on their new products!
Read more
6 people found this helpful

Adam Vana
4.0 out of 5 stars A great travel router for work.
30 October 2019 - Published on Amazon.com
Verified Purchase
This router is great for people who travel frequently. It's powerful yet portable. I work all over the country running video for Conventions, Expos, and other live events, and I need to have a private local network to manage my gear and securely go online. The 5ghz signal means that I get a solid connection among the dozens, or even hundreds of other wifi networks in these enormous ballrooms. The built in OpenVPN was very easy to setup with PIA and helps to ensure my browsing is secure. And of course, I can connect an 8-port switch that I got from Goodwill for $3 to get a wired connection on more devices if necessary.

One thing worth noting: if you upgrade the firmware from 2.x to 3.x, it can break the login page (192.168.8.1). The way you fix this is going into preferences and clearing the cache for that IP address. No need to reset the router (that doesn't fix it anyway).

I didn't give it 5 stars because I am struggling to get the NAS features to work. It takes a lot of effort. I'm sure I'll get it soon, but it sucks that it isn't easier. This technology is not new, yet not user friendly. I want to be able to load files onto the USB and easily see and manage them in the Network page of a Windows device, or perhaps as a DLNA server on my Android phone using Localcast.
Read more

ID
5.0 out of 5 stars Install the latest openwrt firmware
6 July 2020 - Published on Amazon.com
Verified Purchase
The router is great: fast and small.

The only problem is that the manufacturer’s firmware is based on the openwrt chaos calmer that’s is three years old as of 2020.

When I installed the latest openwrt version, the device started working much faster: the Lucy UI is way faster than the stock one. And I was able to install all the latest software: afp protocol for Apple backups and external hard drive drivers.
Read more
4 people found this helpful
Go to Amazon.com to see all 26 reviews 3.8 out of 5 stars
Free & fast delivery, movies and more with Amazon Prime
Prime members enjoy free & fast delivery, exclusive access to movies, TV shows, games, and more.
> Get started
Back to top
Get to Know Us
Connect with Us
Make Money with Us
Let Us Help You
© 1996-2020, Amazon.com, Inc. or its affiliates