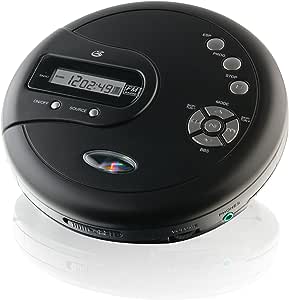 Kenneth Walker
4.0 out of 5 starsChoose the right batteries
8 October 2017 - Published on Amazon.com
Verified Purchase
This GPX CD player works well; highly recommended. A note about the BATTERIES, though: It requires two 1.5-volt AA batteries (for a total of 3 volts.) I would recommend using Akaline batteries. NiMH rechargable batteries (Nickle-metal-hydride) do not seem to work well, if at all. That's probably because NiMH batteries are actually 1.2 volts each (for a total of 2.4 volts, not 3.) It's because of the different chemistry they use. This CD player seems to be sensitive to the voltage level-- which is not that unusual, as some electronic devices just need the full 3 volts. Otherwise, the player works very well.
Read more
120 people found this helpful.

T
5.0 out of 5 starsBought for my grandpa
17 June 2017 - Published on Amazon.com
Verified Purchase
I bought this for my 83 year old grandpa who still listens to CDs. He has macular degeneration and is legally blind. I was struggling to find a portable CD player like this with decent reviews, but decided to give this one a chance. He says it works very well and it does not skip. He has no problem using it, despite his vision impairment. I believe he mostly uses it around his apartment and when walking around the halls in their retirement community. All in all, it seems like a good product.
Read more
100 people found this helpful.

Soxaholic
5.0 out of 5 starsBrings a Little Joy
25 April 2017 - Published on Amazon.com
Verified Purchase
My mother has dementia and remembers very little, but when I put an Andre Rieu CD in the player and put headphones on her...she sometimes will say Andre. That little CD player has given her the chance for a little peace and joy in her world of haze.
Read more
99 people found this helpful.

JoJo
1.0 out of 5 starsDo not buy this one.....
1 June 2017 - Published on Amazon.com
Verified Purchase
There are other people who have written reviews who have exactly the same problem with this unit that I have. When I try to play a cd, "60 SEC" appears very briefly in the digital display. The cd plays for that length of time and the unit shuts off. The only way I can restart it is by removing the batteries. When I do that, it repeats the behavior I have already described. I hoped that removing/replacing the batteries would reset the unit, but it did not. As a result, there is no way you can play a cd, at least not more than the first minute of it. The FM radio works fine, but you find stations by pushing a button. It searches for them, one after another, but you have no way to know what station you are hearing because that info. is not shown in the digital display. I just sent another defective cd player back to Amazon, and I bought this one to replace it. This one is going back too.
Read more
46 people found this helpful.

Woody
5.0 out of 5 starsSimple. Small. Does what it says.
18 August 2016 - Published on Amazon.com
Verified Purchase
A friend of mine recorded, and sent me, a CD of some great music that he had on an LP. With all the digital and Bluetooth stuff, I realized that I no longer had a cd player, not even on my laptop.
This little player does the job well. It has an extra bass feature as well as anti-skipping. It simply can not be beat for the price.

Read more
57 people found this helpful.
Go to Amazon.com to see all 857 reviews 3.0 out of 5 stars
Free & fast delivery, movies and more with Amazon Prime
Prime members enjoy free & fast delivery, exclusive access to movies, TV shows, games, and more.
> Get started
Back to top
Get to Know Us
Connect with Us
Make Money with Us
Let Us Help You
© 1996-2020, Amazon.com, Inc. or its affiliates