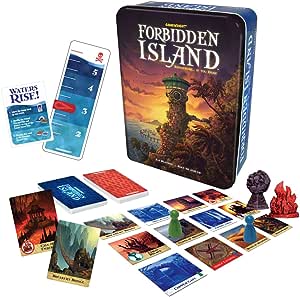 Dare to discover Forbidden Island! Join a team of fearless adventurers on a do-or-die mission to capture four sacred treasures from the ruins of this perilous paradise. Your team will have to work together and make some pulse-pounding maneuvers, as the island will sink beneath every step! Race to collect the treasures and make a triumphant escape before you are swallowed into the watery abyss!

Players take turns moving their pawns around the 'island', which is built by arranging the many beautifully screen-printed tiles before play begins. As the game progresses, more and more island tiles sink, becoming unavailable, and the pace increases. Players use strategies to keep the island from sinking, while trying to collect treasures and items. As the water level rises, it gets more difficult- sacrifices must be made.

With multiple levels of difficulty, different characters to choose from (each with a special ability of their own), many optional island formats and game variations available, Forbidden Island has huge replay value. The game can be played by as few as two players and up to four (though it can accommodate five). More players translates into a faster and more difficult game, though the extra help can make all the difference. This is a fun game, tricky for players of almost any age.

Gear up for a thrilling adventure to recover a legendary flying machine buried deep in the ruins of an ancient desert city. You'll need to coordinate with your teammates and use every available resource if you hope to survive the scorching heat and relentless sandstorm. Find the flying machine and escape before you all become permanent artifacts of the forbidden desert!

In Forbidden Desert, a thematic sequel to Forbidden Island, players take on the roles of brave adventurers who must throw caution to the wind and survive both blistering heat and blustering sand in order to recover a legendary flying machine buried under an ancient desert city. While featuring cooperative gameplay similar to Forbidden Island, Forbidden Desert is a fresh, new game based around an innovative set of mechanisms such as an ever-shifting board, individual resource management, and a unique method for locating the flying machine parts.

The saga continues! What started off as a simple island adventure has evolved into an ever-developing story line. From ocean, to desert, and now to the sky, this latest instalment takes you to new heights in this electrifying cooperative adventure! Work as a team to explore a mysterious platform that floats at the centre of a savage storm.

Connect a circuit of cables to launch a secret rocket - all before you are struck by lightning or blown off to the depths below. It’s a high-wire act that will test your team’s capacity for courage and cooperation. One false step and you all could be grounded… permanently!

3.9 out of 5 stars
3.9 out of 5
5 customer ratings
How are ratings calculated?
To calculate the overall star rating and percentage breakdown by star, we do not use a simple average. Instead, our system considers things like how recent a review is and if the reviewer bought the item on Amazon. It also analyses reviews to verify trustworthiness.

Amazon Addict
5.0 out of 5 stars Clever cooperative game - engaging for both kids and adults
28 December 2017 - Published on Amazon.com
Verified Purchase
Wow, what a clever game! I'm so impressed to have a cooperative game that is complicated enough to engage adults and still playable with the kids. Marketed for ages 10 & up, but my 7- and 9-year old play. Since it's cooperative, it's pretty easy to explain a strategy that the 7-year old doesn't get right away. And sometimes the 7-year old explains to us!

Here's a hint to get the kids interested....figure it out yourself first. They don't want to sit and listen to the instructions which are a bit lengthy. I set the game up for multiple players, played each player's part myself to figure out the strategy and get all my questions answered. THEN I had the kids join me. Much easier to explain and work with them since I didn't have to constantly reference the instructions. Super fun.

heyheyhey
5.0 out of 5 stars Get this game. You will love it.
27 April 2015 - Published on Amazon.com
Verified Purchase
My daughters, ages 8 and 10, love this game, and so does everyone else we've played it with. At first, the game might seem a little complex, but once you get rolling, you'll have no troubles with the rules or order of play. The designers also included a little "cheat sheet" of action options and play order on each player's card.

The object is simple--capture four artifacts and helicopter off the island from the landing site before the rising waters flood the island enough to either drown a character, swallow the areas housing an artifact, or wipe out the landing site, which will prevent your escape. You have a choice from up to six characters, such as a diver, an explorer, an engineer, a messenger, or a pilot. Each character has unique and useful abilities they add to the team. For instance, the pilot can fly to anywhere on the island in one turn. The diver can swim underwater through sunken areas of the island. The engineer can shore up (stave off the rising waters) twice as much area as the others. Very well-developed skill set. Each character is useful and you'll regret not having any of their abilities with you. And, because the game is for 2-4 players, you can't have them all with you. This is a nice touch, too, because you can never tell which skillset might be more useful, and this changes every game due to the changing layout of the island and due to the random nature of the cards you'll draw as you play.

Once you get started, you might think it'll be a simple game and you'll breeze through it. We thought so, and then were swiftly overwhelmed by the flooding island, frantically trying to shore up game tiles to preserve the precious artifacts and landing site before we were lost. A really unfortunate session of flood cards (which represent where the water levels are rising) and the dreaded WATER RISES cards (which mean that each turn, even MORE areas are impacted by the waters AND that areas can start to sink into the abyss and be gone forever), we couldn't even rescue one artifact before being soundly defeated.

The second time we played, we took it seriously. We shored up every part of the land we could, using sandbags and helicopter lifts from the treasure cards to combat the eager water levels. Our pilot and engineer raced across the area while the messenger and diver gathered and exchanged treasure cards. Despite our best efforts, the water levels rose and the island started to sink. We lost entire areas, leaving great holes in our island, and the diver and pilot were frantically trying to get the last two artifacts while the messenger and engineer continued to stave off the inevitable. We felt elated--like we had really accomplished something--when, thanks to a few lucky helicopter lift cards, the four of us made it to the landing spot and

The game gets intense--it is designed to do so. Unless you're phenomenally lucky, your team WILL start to lose ground and you won't be able to preserve the entire island. And that is part of the frantic fun.

Finally, the tiles are well made, with imaginative and evocative names. The artifacts look cool, too. And the game play moves pretty swiftly, so you won't get bored.

In my opinion, this is a can't-miss game. It's rapidly become our favorite, and if your family loves quick-paced adventure games, it may become yours, as well.

The Stas
4.0 out of 5 stars This game is great and bought it because Pandemic is one of my ...
7 June 2016 - Published on Amazon.com
Verified Purchase
This game is completely cooperative; either everyone wins or everyone loses. You are given a number of actions and you can spend those actions to move, gather artifacts, or save the island.

This game is great and bought it because Pandemic is one of my favorite games. This is a much smaller game than Pandemic, uses similar game mechanisms, and was designed by the same person. Unfortunately for me, I played Forbidden Desert (the sequel to this game) and it was better than this one. This game is still quite good and could easily be used to get players into this style of game before introducing them to Pandemic.
Read more
45 people found this helpful

Tech Savvy
5.0 out of 5 stars Fantastic cooperative game that is fun for the whole family
28 April 2018 - Published on Amazon.com
Verified Purchase
I picked this up during the recent tabletop games sale and have played it with my kids (preschool, kindergartner) daily since it arrived. It is a lot of fun and has been a huge hit with both of them; in fact, my son wanted me to play as soon as I got home from work the day after our first game. The cooperative gameplay is really great, because my kids get to celebrate victory (or lament defeat) together. The rhythm of flooding tiles, passing cards, and moving around the island is fun and engaging. I enjoy helping my kids think strategically about the right move -- something my preschooler can't do yet, but my advanced kindergartner can. They get super-excited about shoring up each other's tiles and burst into cheers when we lift off the island.

I think we'll get a lot of replay out of it in the immediate future. Even if it only comes out of the game pile every once in a while, I feel like I've already gotten my money out of it. Well done, Gamewright Games!

Edit: I forgot to talk about what's in the box. The tiles are high-quality and thick; they remind me of the Carcassonne tiles, just bigger. The playing cards aren't as thick as playing cards, but they're sufficient durable (so long as children don't bend them mindlessly). The water meter, treasure tokens, and pawns are all high-quality. The tin (instead of a cardboard box) is a nice touch. In sum, I'm very happy with the production quality.
Read more
18 people found this helpful

Julia Wilson
4.0 out of 5 stars Overall a fun game
27 January 2018 - Published on Amazon.com
Verified Purchase
Played as a 2 player game with my husband. I haven't historically been a fan of board games, but we're trying to get into a few games that can be adapted for family game nights as our kids get older. Cooperative play means we don't get competitive, and no one goes to bed grumpy because they lost. That's important because he usually beats me at everything and I am a sore loser. It's got a decent amount of suspense and gets more exciting as the game goes on. It's probably more fun with more players. The instructions could be written a little bit more clearly, as a few of them are a little vague. Overall pretty fun, and it doesn't drag on for eternity like some board games. It's over in about 10-15 minutes (at least it was for us).
Read more
29 people found this helpful
Go to Amazon.com to see all 2,493 reviews 4.7 out of 5 stars
Back to top
Get to Know Us
Connect with Us
Make Money with Us
Let Us Help You
© 1996-2021, Amazon.com, Inc. or its affiliates