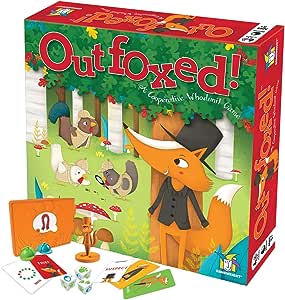 Mrs. Plumpert's prized pot pie has gone missing, and now it's a chicken chase to crack the case! In Outfoxed, you move around the board to gather clues, then use the special evidence scanner to rule out suspects. You have to work together quickly because the guilty fox is high-tailing it towards the exit! Will you halt the hungry hooligan before it flies the coop or will you be outfoxed?

Mrs. Plumpert’s prized pot pie has gone missing and it’s now a chicken chase to crack the case! Move around the board to gather clues and then use the special evidence scanner to rule out suspects. You’ll have to work together quickly because the guilty fox is high-tailing it towards the exit! Will you halt the hungry hooligan before it flies the coop… or will you be Outfoxed?

Outfoxed combines cooperation and deduction in a non-competitive way. As you work together to nab the guilty fox, you’ll learn valuable skills such as estimating probability, paying attention to detail and the important role that collaboration plays towards problem-solving.

Suitable for ages 5+, this 2 to 4 player game is one the whole family can enjoy. The rules are easy and the mechanisms are clear. The replay value is very high as each game is different, so it is a game you can keep coming back to!

5.0 out of 5 stars
5 out of 5
6 customer ratings
How are ratings calculated?
To calculate the overall star rating and percentage breakdown by star, we do not use a simple average. Instead, our system considers things like how recent a review is and if the reviewer bought the item on Amazon. It also analyses reviews to verify trustworthiness.

Kehinde Olufunwa
5.0 out of 5 stars We love it.
6 March 2021
Style Name: SingleVerified Purchase
It's an addictive game - lots of fun, great for collaborative skills but also fosters a healthy sense of competition with 'the fox'!
Read more
Helpful
Report abuse
There is 1 customer review and 6 customer ratings.
See all 1 customer reviews
Write a customer review

Peggy
5.0 out of 5 stars Fun cooperative game!
9 January 2019 - Published on Amazon.com
Style Name: SingleVerified Purchase
This is a fun cooperative game, where players work together to rule out suspects and find the guilty fox before he is gone. Our 7 and 10-year-old kids love this game, and we adults enjoy playing this game with them. I highly recommend this game! Please mark if you find my review helpful. Thank you so much!
Read more

5.0 out of 5 stars Fun cooperative game!
Reviewed in the United States on 9 January 2019
This is a fun cooperative game, where players work together to rule out suspects and find the guilty fox before he is gone. Our 7 and 10-year-old kids love this game, and we adults enjoy playing this game with them. I highly recommend this game! Please mark if you find my review helpful. Thank you so much!
Images in this review

J.S. Knapp
4.0 out of 5 stars Still luck-based, but with some creative ideas that your kids might love
9 January 2018 - Published on Amazon.com
Style Name: SingleVerified Purchase
I bought this after watching several positive YouTube reviews for the game. Our daughter turned five on Christmas Eve and I've been wanting some games that will challenge her mentally instead of giving her a win simply with dice or a spinner. (Seriously, spinner games are the worst!)

This game... it kinda tackles that... Kinda.

There are still dice, and there's a simple rule that states you have to declare your goal for the dice before you roll - you can't just go with what the dice gives you. This is the luck element, and it is the only thing that will dictate success or failure at the game. Success simply requires enough successful rolls to uncover and reveal the three clues which relate to your randomly-chosen "thief" at the beginning of the game, as well as revealing enough of the suspects until you find the one containing all three clues. You could get lucky and reveal the clues quickly, matching to a suspect revealed early in the game. Or you can have some nail-biters where the clues are revealed but the matching suspect is literally the last one left to flip over. Or you can botch enough rolls and lose. It helps that the game is cooperative, meaning that you don't feel as personally victimized by the luck. However, get a few older people around the table, and you might get someone blaming someone else for not getting enough successful rolls.

The skill is simply understanding how to determine which of the suspects is innocent or guilty based on the clues revealed and the results from the clue-finding device (which itself is fun to work with.) To an adult this is a no-brainer, but to a five-year-old it's a bit more complex. The plus side - and the reason I ultimately like the game - is the sheer thrill a child experiences when they connect the dots and nail the thief.

A few other notes: the game takes up a decent amount of real estate. The board is rather large, and you're required to lay 16 cards either around the board or otherwise nearby. This is in no way a complaint, but just a head's up - as far as kids games go, this one is rather large.

Also, the cards feel a tad thin, and my daughter already bent one just sliding it into the clue-finder piece. The theme and gameplay might work for a young kid, but the cards won't stand up to a lot of abuse. In addition, the game arrived with the cards rubber-banded instead of the usual plastic wrap, meaning many of our cards were "marked" on arrival. The detective hats and fox pieces are a soft plastic that allow a little bending (which is good), and the dice are nicely printed with vibrant colors.

All in all the game is a good, if not short-term addition to the collection; kids will find it much more replayable than adults (kids can even play solo if they wanted to), with a fun theme that lightly encourages teamwork, albeit with an inescapable element of luck.

Adam Anderson
5.0 out of 5 stars Fun Game to introduce Big Kid board games
12 September 2018 - Published on Amazon.com
Style Name: SingleVerified Purchase
Bought this for my 4.5 year old as an introductory deductive logic game. At first, I was pretty disappointed by the simplicity of the logic needed for the game. Basically, you find out if the guilty fox does or does not have a particular item on their person. If the guilty party does have the item, then you eliminate all the suspects that do not have that item and if the guilty party does not have the item, then you eliminate all the suspects that do have the item. Simplistic enough that my 4.5 year old caught on pretty quick and was able to keep or eliminate suspects without assistance. So why the 5 star rating if the game was not what I hoped it would be? It is because my daughter LOVES this game and she has never liked board games all that much. Also the game does teach a fair amount of 4.5-7 year old appropriate strategy and has just a little bit of complexity to it which she has never had the patience to learn for any other game we have tried. I see it as a great way to introduce 4-7 year old kids to big kid board games, that a 4-7 year old will probably love.
Read more
86 people found this helpful

S. Clegg
5.0 out of 5 stars FANTASTICALLY DESIGNED GAME FOR SMALL CHILDREN
25 September 2015 - Published on Amazon.com
Style Name: Single
The folks at Department of Recreation designed this game and did an awesome job! We just got it a few days ago and my just-turned-5 year old can't stop talking about it. She loves it! As her mom, I'm enjoying it too. It's nice to have a game that's at least mildly interesting for grown-ups who play along with their children (as opposed to things like Candy Land).

This game is sort of like "Clue" for little kids. A fox stole a potpie and you have to figure out which fox it was before s/he escapes into the foxhole. There are SUSPECT cards, each with the picture and name of a fox. Then there are THIEF cards - one for each of the suspects. One of the THIEF cards is chosen (but kept secret) in the beginning of the game. You then spend your turns either revealing SUSPECTS or finding CLUES. The clues are things like hat, scarf, glasses, umbrella, etc and whether or not the THIEF has those items. For example, you might find out that your guilty fox is wearing a hat and pearls but does not have an umbrella or glasses. Once you've revealed the SUSPECT card that matches all your clues, you know who the guilty fox is and can announce it. But if you aren't able to figure out the clues fast enough, the fox gets away. There is dice-rolling involved (but no numbers on the die, just symbols) for an element of luck/chance.

One of the coolest features of the game is the "magic clue revealer" thingy. It's a plastic case that you slide the chosen THIEF card into at the beginning of the game. Then, every time you get a CLUE, you place the clue (i.e. a token with a picture of a hat on it) onto a spot on the revealer. Then you slide open a door and you will see either a red or green dot, indicating whether your THIEF does or does not have that item (i.e. the hat) on him. This part is a lot of fun for the little ones!

I'd say this game is great for the ages of about 4-8. It teaches great critical thinking skills,like logic and deduction.
Read more
192 people found this helpful
Go to Amazon.com to see all 794 reviews 4.7 out of 5 stars
Back to top
Get to Know Us
Connect with Us
Make Money with Us
Let Us Help You
© 1996-2021, Amazon.com, Inc. or its affiliates