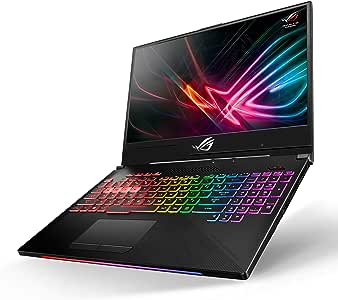 Style: RTX 2060 | 512G SSD | 144Hz
Technical Details
Additional Information
Feedback
Would you like to tell us about a lower price?
If you are a seller for this product, would you like to suggest updates through seller support?

William W.
1.0 out of 5 starsTHIRD update: ASUS support lies. Second round of repairs fail.
15 January 2019 - Published on Amazon.com
Verified Purchase
June 17, 2019: ASUS support tells me that I must send the machine for additional test/repairs. UNACCEPTABLE. The tech I worked with over a month ago told me that if the problem returned my machine would be replaced. I will not send this back in. The only acceptable resolution is replacement. I've lost literally months while this machine went back and forth to the ASUS repair facility and I'm still stuck with brick. I will never buy another ASUS computer. This is literally the worst computer purchase I've ever made and I've been using these things since the late 1980s.

June 13, 2019: THIS COMPUTER LITERALLY CAME BACK FROM THE REPAIR FACILITY FOR THE SECOND TIME LESS THAN A WEEK AGO and the issues have returned AGAIN. I'll never buy another ASUS product. This is garbage, the brand is garbage and I just want my machine replaced or money returned. This is absurd. If I could give this machine a negative rating I would...

I've brought my rating down to one star. You can see my original review after my update.
Update:
The problem with the fans grew worse. I tried updating all the drivers and this failed to fix the problem. I contacted support and spent about thirty minutes walking through the issue with them. They issued and RMA and I sent the computer out for a warranty repair. My computer was out for about three weeks and when it was returned to me, the problem was alleviated, but only for about a week, at which time the fans gradually spun up more and more frequently and for longer and longer periods of time. Right now, the fans have literally been running, and they are VERY LOUD for the past two hours. I'll close the laptop and the fans will spin down, but within half an hour, they spin up again. The computer actually woke me up last night when the fans kicked in (with the laptop closed).

I spoke to support again, and this time the agent told me the behavior was normal. Okay, right.

In addition, this computer's track pad is the worst I've ever had. It's almost unusable.

I regret purchasing this machine. It is absolutely the worst computer purchase I've ever made.

Original
I bought this computer primarily for a mobile DAW. In general, it supports everything I do in terms of audio recording and editing. However, there's a couple caveats I feel I must share with others. 1. The fans are running for no apparent reason. They are tremendously loud and in fact they've been running since I turned on the computer 5 minutes ago. I've disabled all but the essential startup items and currently I am running only Chrome. No other applications are running. The computer isn't even warm. It's really annoying. I was one version behind on the BIOS, so I flashed it with the latest. No change. 2. The track pad isn't great. Sometimes it's weirdly sensitive and mistakes a scroll for a click. Other times scrolling is difficult (it will scroll smoothly and suddenly stumbles requiring that I move the cursor to the side and try again. If that doesn't work I just go to the scroll bar and go from there.

So while the computer is suited to my needs, it's drawbacks are very frustrating. I'm considering sending it back.

If you plan on playing games you really need to buy an extra stick of memory with the 16gb model. Games will run mediocre without it but ur frame rates will increase 90-110% when you add the 2nd channel (depending on the game). Shadow of the tomb raider averaged 50fps with med-high settings with 1 channel, it jumped to over 90 fps with ultra high settings. Resident evil 2 remake went from 60-85 to 105-144 (cus vsync probably) on highest settings.

It's great for work. The 144hz panel makes everything look smooth. I got lucky, my panel only has a little light bleed in the corners and can only be seen when the screen goes completely dark.

Fans are loud. Use headphones. The speakers are pretty good, u need to turn it up really loud to over power the fans. Panel is not gsync.. but 144hz so doesn't really matter.

update: Worked great for about 3 weeks. Then the graphics card decided to disconnect itself from the computer. Couldn't find it in bios. My guess is high temps probably loosened a solder joint. I still like the computer so i ordered a replacement.
Read more
124 people found this helpful.

Frankie NG
2.0 out of 5 starsUnfortunately my laptop have blue screen issued when I’m playing game
23 February 2019 - Published on Amazon.com
Verified Purchase
The pros:
1. Beautiful screen
2. Solid build
3. Easy to upgrade (ram or storage)
4. The speaker sounds great
5. Easy to monitoring the basic information by software and control the fans and colour of the keyboard (Armoury Crate)

When I playing game, this laptop provide a beautiful display and good sound quality to me to enjoy. Unfortunately, my laptop seem have something wrong (software or hardware problem), it always blue screen when playing game and I try to fix it (e.g. update the driver or windows) by finding the solution on internet but the situation still happen. Another problem is after I install GeForce Experience, it might have a weird colour dots randomly appear and the laptop might going to freeze or blue screen.

I returned this product and it delivered to return center over a weeks but I still waiting for my refund. Unlucky and Disappointed experience I shops on amazon!
Read more
87 people found this helpful.

The Meh: It is a large, heavy laptop. At the outer edge of what I consider portable. But fine for my purposes which don't require constant movement. Screen quality is very average.

The Bad: On the 3rd startup the network adapter failed to appear. Device basically showed that no wifi card was installed. 2 hours of troubleshooting and ASUS support recommended I return it. Also, while it was working I ran some basic diagnostics and performance. While CPU appeared fast, graphics and overall performance did not equal the sum of the parts as I expected. Perhaps if I had it longer I could have tweaked.
Read more
77 people found this helpful.
Go to Amazon.com to see all 201 reviews 3.7 out of 5 stars
Free & fast delivery, movies and more with Amazon Prime
Prime members enjoy free & fast delivery, exclusive access to movies, TV shows, games, and more.
> Get started
Back to top
Get to Know Us
Connect with Us
Make Money with Us
Let Us Help You
© 1996-2020, Amazon.com, Inc. or its affiliates