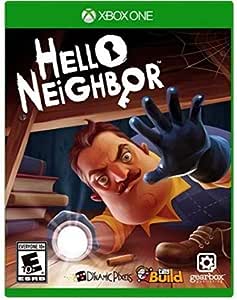 by Gearbox Publishing
Platform : Xbox One
In stock.
International product from outside Singapore
Arrives: 24 - 25 July

Fastest delivery: 17 - 20 July Details
Ships from and sold by Amazon US.

You move into a brand new suburb and notice your neighbor is hiding something in his basement. The only logical thing to do is to break into his house and figure out what he's hiding. Hello Neighbor is a stealth horror game about sneaking into your neighbor's house to figure out what horrible secrets he's hiding in the basement. You play against an advanced AI that learns from your every move. Really enjoying climbing through that backyard window? Expect a bear trap there. Sneaking through the front door? There'll be cameras there soon. Trying to escape? The Neighbor will find a shortcut and catch you.

Welcome to the neighborhood!

You move into a brand new suburb and notice your slightly odd neighbor is hiding something in his basement. The only logical thing to do is to sneak into his house and figure out what he’s hiding.

Your Neighbor is very protective of his property, and his secrets. In order to find out what he's hiding, you must lure him out of the house so you can sneak inside. He also learns from the tricks you play on him. Do you normally sneak in through the back window? Next time there might be a bear trap waiting for you! Always entering through a specific door? Soon there will be cameras to watch for you!

With the suspicious Neighbor always on guard, you're constantly looking for a way to carefully sneak by, or a place to hide. If he sees you though, your only choice is to run for the nearest exit! Don't worry, though, getting caught sends you back to the safety of your home, to try again.

E Yare
3.0 out of 5 starsGreat in concept, mediocre in execution
16 December 2017 - Published on Amazon.com
Platform For Display: Xbox OneVerified Purchase
First, let me say that I felt obligated to post an objective review, since most of them are either extreme positive or extreme negative. The truth is somewhere in the middle. I was looking forward to this game ever since I saw the demos being played online. I LOVED the concept of the plot (in a fashion of Rear Window or the 'Burbs), loved the quirky Pixar-style, and loved that it was a puzzle game as well as a "stealth" and evade game.

What I expected: A wacky cartoonish puzzle game (similar to Day of the Tentacle or any of those caricature Lucas Arts games), mixed with the tension of a cat and mouse game like Alien Isolation or Manhunt, with the charm and scares of Five Nights at Freddy's.

After playing the game, I have a different perspective.

The Pros:
-The Graphics. I know most people are beating up on the graphics. Personally I thought they were on par. It's a cartoon game that looks like a Pixar Movie. There's only so much you can do with cartoon characters and houses. Don't expect Resident Evil 7.
-Very smooth. Despite what others have reported, I didn't experience any bugs or glitches. And the game definitely runs on my Xbox.
-Pleasing aesthetics, and spooky atmosphere at times.
-Forgiving game. If you get caught (which will DEFINITELY happen), you don't have to start all the way over again.
-The AI. Here's where the developers put most of their efforts in, and it shows. The creators boast how the AI will react to your habits, and try to counter them, and learn from past experiences, and they were very true to their word. Definitely a good step forward in the world of video gaming.

The Cons:
-Controls are okay, but feel a little clumsy at times.
-The price tag is too much for what they're delivering. This game ought to be priced between $14 and $20.
-There is no logic to the puzzles. Especially since you can pretty much pick up everything (in Fallout 3 fashion), and most of it is just arbitrary garbage. Key items and places to use them are not apparent. To be fair, I expect as much from a cartoon style game. You're only going to solve this game with a walkthrough, or a LOT of trial and error. The latter if which would be okay, if it wasn't for this next (and in my eyes, BIGGEST fault of the game).
-It is EXTREMELY difficult, frustrating, and rage-inducing. All around, I'm a pretty Zen video gamer. But even with a walkthrough in my lap, this game was frustrating to the point where I had to turn it off, walk away, and return when I wasn't fuming. Hello Neighbor is bound to be the reason controllers get thrown through expensive flat-screens. Now, admittedly I'm methodical, so I prefer slow-paced video games, where you can explore every nook and cranny, test out every key or item to see what works before moving on (IE: Resident Evil, Day of the Tentacle, LA Noire, Fallout 3, Arkham, etc). This game is NOT at all like that. It's advertised as a "Stealth" game, but the truth is that there's NO stealth element. Even on your first attempts, you WILL get caught by the neighbor within seconds of entering his property. There's simply no time for trial and error puzzle solving. You have to solve things while sprinting. Even clinging to the walkthrough and knowing exactly where to go and what to do, this game became a tedious routine of: Enter property, not even come close to item or door, after 3 seconds get chased, sprint to safety/get caught, repeat. Not to mention that some of the puzzles are climbing/jumping puzzles, and for those of us who remember the original Mario Bros., jumping games taught most of us 80's kids how to curse.

To me, personally, if they could have dialed down the intensity of the neighbor/antagonist, even just a little, I would rate this game much higher. It was simply just too much frustration too early on. There was no opportunity to feel tension, atmosphere, or even curiosity about the actual story. When you're cursing and snarling as you claw for every inch forward that you take in this game, you simply aren't thinking about the things that give a game personality.

They had something really special here, and they blew it by making it too hard. It was a good try, and I'm hoping to see more from the creators that might be similar in style, but with some improvements.

Amazon Customer
4.0 out of 5 starsUpdate Xbox to download game
29 December 2017 - Published on Amazon.com
Platform For Display: Xbox OneVerified Purchase
We pre-ordered this game to give as a Christmas present. My son was super excited! He had no idea that it was even made for Xbox, he had been obsessed with watching other people play it on YouTube on the PC for months. We were very disappointed when there was an error with the disc claiming it was dirty or damaged. Amazon refunded us and we ordered another one hoping for the best. The second disc had us update our Xbox (we have the Xbox one) and then we were able to download the game. The game isn’t actually ON the disc. I don’t know if this can help anyone else, but I thought I’d share it is what worked for us!

J. Gibbs
5.0 out of 5 starsIt's a short game straight through, but looking for extras and insights has proved entertaining for longer-term
17 January 2018 - Published on Amazon.com
Platform For Display: Xbox OneVerified Purchase
My 9yo enjoys this a lot. The whole family has been trying to figure out the mystery of this game. It's fairly easy and quick to solve but we can't figure out if we are the bad guy or he is. My son keeps playing and unlocking new secrets to try and piece together a story line. All in all it has been very enjoyable as a first xbox game. First, next to minecraft that is. While there is nothing gory in it, there is enough suspense that I have needed to stay nearby when he first started playing the game. It's a good mix of creepy and suspense. Trying to understand the story line has introduced topics in conversation I might not have otherwise had at this time. On that same note, we've had a lot of conversations about understanding that people have deep stories beyond their surface. That was unexpected and has been very cool.
For reference we are new to xbox. Favorite games are Unraveled, Minecraft & some of the Lego games. All pretty tame.
Read more
19 people found this helpful.

Amazon Customer
5.0 out of 5 starsThe Xbox game is exactly like the PC version, but easier to control.
12 June 2018 - Published on Amazon.com
Platform For Display: Xbox OneVerified Purchase
My son started playing this on my pc, and watching youtube videos of others playing it so he was fully prepared for the Xbox version. He immediately preferred the Xbox version because of the ease of the controls. In the full game version, however, there are mini-games that he struggles with to the point of aggravation: the schoolhouse run vs mannequins is the worst of them. He gives the game a break and goes back the next day and finally gets past the game. Yes, he's played the Xbox version twice now; pc version, possibly a dozen times so far. Finding Pre-alpha for Xbox One would be the ultimate gift for him. Pre-alpha screwed up my pc twice, so he's still going through withdrawal symptoms; pre-alpha is his favorite. This game and Amazon delivered everything as promised in the description. I recommend the game because there's no blood and guts, no overwhelming graphics, and minimal violence; the worst you can do it shoot a toy gun at the "Neighbor" (apparently named Sost) and it stuns him for a second or two. It's a nice break from rack-'em-up-shoot-'em-down.
Read more
12 people found this helpful.

Ae23
5.0 out of 5 starsKids have fun playing together
16 July 2018 - Published on Amazon.com
Platform For Display: Xbox OneVerified Purchase
My kids love this game. It’s a mindless game with no educational value, but it doesn’t pretend to be. My three kids (5,9,11) enjoy playing this and watching each other play. So even though it isn’t productive, they are bonding and having fun together.
Read more
8 people found this helpful.
Go to Amazon.com to see all 273 reviews 4.0 out of 5 stars
Free & fast delivery, movies and more with Amazon Prime
Prime members enjoy free & fast delivery, exclusive access to movies, TV shows, games, and more.
> Get started
Back to top
Get to Know Us
Connect with Us
Make Money with Us
Let Us Help You
© 1996-2020, Amazon.com, Inc. or its affiliates