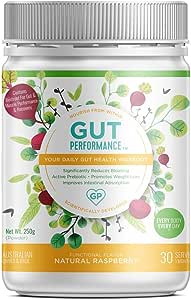 Concerned Constitutionalist
4.0 out of 5 starsProduct is Beneficial, but Arrived Damaged
17 May 2019 - Published on Amazon.com
Verified Purchase
After only 3 days of use, Gut Performance seems to be solving some of my long standing digestive problems. I've tried many things over the years, but I believe this product will be helpful. More time is needed.
Unfortunately the jar of Gut Performance had been damaged before it was placed in the Amazon box. The lid had been partially opened, and some product had spilled onto the books and DVDs also in the order. The box itself was undamaged, so the jar had to have been in that state before being placed in the Amazon box. The security ring had not been broken, but the plastic jar appears to have been squeezed, and the lid ruptured. The contents were not contaminated, fortunately, and I will likely order it again.
Read more
2 people found this helpful.

Kimmy Wood
3.0 out of 5 starsIt works smoothly but taste and texture is nasty!
10 March 2020 - Published on Amazon.com
Verified Purchase
I tried this and was super excited! Unfortunately I have a hard time getting myself to drink it since the taste and texture is bad... I plan to stick to miralax when it comes to my problems with digesting and food passing through.
Read more

Chris Coyne
5.0 out of 5 starsPerfect poops coming your way.
25 December 2019 - Published on Amazon.com
Verified Purchase
This stuff is a game changer. Heard about it from Haddie Boydle. It’s the only thing that’s ever worked for me. I mix it with a little PC a fruit punch powder after work out and my poops are orgasmic.
Read more

Dr. Hunt
5.0 out of 5 starsDefinitely helped with bloating
29 June 2019 - Published on Amazon.com
Verified Purchase
I wasn’t sure what to expect as far as if my body would look different or feel different. I can honestly say I see the difference in my bloating and perhaps my energy levels too. Obviously continuous use will allow me to get the best results. So far I’m in love with this product.
Read more

kathy wahlgren
5.0 out of 5 starsGood product
29 September 2019 - Published on Amazon.com
Verified Purchase
Really works. After being pregnant and having a c-section, my GI system was all out of whack. After starting Gut Performance daily, I've had a significant decrease in bloating and my reflux has disappeared. Better if you mix with sparkling water or smoothies.
Read more
Go to Amazon.com to see all 15 reviews 4.5 out of 5 stars
Free & fast delivery, movies and more with Amazon Prime
Prime members enjoy free & fast delivery, exclusive access to movies, TV shows, games, and more.
> Get started
Back to top
Get to Know Us
Connect with Us
Make Money with Us
Let Us Help You
© 1996-2020, Amazon.com, Inc. or its affiliates