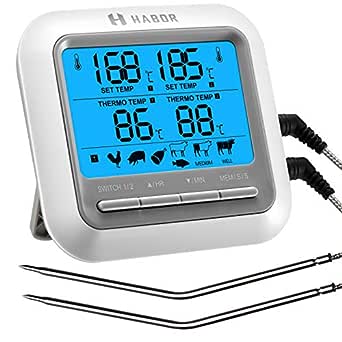 Measure 2 Kinds of Food Simultaneously Designed with 2 probe connectors and comes with 2 stainless steel probes, this Habor cooking thermometer can be used for measuring 2 kinds of food at the same time, which fasten your cooking speed and save you more time for other courses when cooking family dinner for Christmas or Thanksgiving. What’s more, its sensitive probe with step-down tip can get the temperature more precisely and instant shows the reading on the LCD screen. Loud & Clear Buzzing Alert When the food reaches the specified temperature or the countdown timer hits zero, there will be a sound alert to remind you. This function frees you from keeping an eye on the oven and brings a lot of conveniences when you are busy preparing several courses. Easy to Stand on the Table or Stick on the Metal Surface With a flip-out stand and two magnets on the back, you can place the cooking thermometer on the table when using it. Or you can simply stick it on the smooth metal surface when there is nowhere to place it. Heat-Resistant Wire for In-Oven Using Cover by braided steel, these 40 inches long wires allows you to measure the temperature of the meat with probe and the wire leaved in the oven when roasting. Specification Display: LCD Temperature Measuring Range: 14℉ to 572℉ / -10℃ to 300℃ Max Countdown Timer Setting: 23 h 59 min Probe Material: Stainless Steel Thermometer Size: 5.67 3.66 1.50 in Wire Length: 40 in Net Weight: 3.95 oz Note Please do not submerge the probe and the wire when washing. Please keep the probes out of the reach of children. Product Included 1 x Cooking Thermometer 2 x Probe 2 x AAA Battery 1 x User Manual

wenj
5.0 out of 5 stars High Quality, Great Price, "Mom-Proof"
12 September 2020 - Published on Amazon.com
Verified Purchase
This is a much higher quality product than I expected, given the price. The cords are "Mom-proof", as my kids would say. I had a roast in my frig waiting it's arrival. Broiled to Medium using the preset temp, it was perfect. The preset is the temp I normally use. This thermometer is ridiculously easy to use. Even so, I read the booklet before I used it, just in case. I don't know if this matters, but as sometimes weeks can go by between uses I take the batteries out when I put it up.
So far I'm very happy with my purchase, and definitely recommend this meat thermometer to anyone looking for one. I rely on reviews when I consider purchases, so I hope this helps.
Read more
11 people found this helpful

Aileen Azi
5.0 out of 5 stars not very accurate--updated
4 September 2020 - Published on Amazon.com
Verified Purchase
Two probes, probe wires will degrade quickly as they are unsealed; more importantly, I used a reliable thermometer simultaneously to compare results and found this one ran a few degrees warmer at cold temperature (below 50 F) and a few degrees warm at higher temp (above 100 F). still can't go wrong for the price as long as you're not needing an extremely accurate reading. will use this until probe cords fray when +/- 5 degrees isn't a big deal.

updated-- 5* customer service, they read this 3 * review and offered me a full refund. doesn't get better.
Read more
10 people found this helpful

Daydreamer
5.0 out of 5 stars Accurate and Easy to Use
23 November 2020 - Published on Amazon.com
Verified Purchase
Bottom line: This thermometer works really, both for calibrating ovens and for telling the accurate temperature of food. When in use the screen is a bright blue, and when it’s time for the alarm (either when your oven reaches the temperature you want, or the food into which the probe is inserted is ready), the alarm beeps loudly and the blue screen flashes, for both visual and audible alarms.

Based on tips from prior reviews we read, when we received this thermometer the first thing we did was test both probes by putting them first into freezing water (they both went to 32 degrees in seconds), and then -- after waiting a few minutes! -- we put them in a saucepan of water that was at a rapid boil, while the pan was still on the stove. Both probes only went to 208 degrees rather than the 212 degrees at which water boils, but we can live with that.

Then we tested both our wall ovens by positioning a probe so that it dangled from a rack and its tip was roughly in the center of each oven, not touching anything else. We set both ovens to 350 degrees, and left an in-oven thermometer in both, along with the probes, so we could compare them. The probes confirmed what we suspected: one oven was 25 degrees off, and the other took half an hour to come up to 350 degrees, even though the digital readouts for both ovens indicated they were at 350 degrees long before they were.

Now we have the confidence to cook Thanksgiving dinner without worrying about it being ruined! The plan is to first use both probes as oven thermometers to tell when the ovens reach the temperature we need, and then to put one probe in the turkey's thigh and the other in the stuffing in the turkey’s cavity while the turkey cooks.

We have just one tiny complaint: The petite box this thermometer comes in includes the instruction manual, which is a booklet measuring just 2-1/4" by 3-1/4". It’s almost impossible to read. But as we have a flat screen printer in the house, we copied the manual and used the printer’s enlarging function to make it a full sized manual. MUCH easier to read, and once you can read it, it turns out this thermometer is super easy to use.
Read more
5 people found this helpful

dachiri
4.0 out of 5 stars WHY IS PROBE 2 ON THE TOP???
8 December 2020 - Published on Amazon.com
Verified Purchase
PLEASE pay attention to which outlet goes with which probe. Probe 2 is the top outlet. That is the dumbest design ever! But, once I realized that, it was fairly accurate. I checked it against a pretty good instant-read thermometer when in the meat, as well as using the restaurant calibration trick (crushed ice + some water, should read 32), and it was close enough (came out with in a degree in each test, and generally read low, which is good enough). Lines on the probes are a bit short, also...even on the front of my oven, I had to be careful when moving the pans around.
Read more
3 people found this helpful

Sensey
4.0 out of 5 stars Was accurate out of the box
3 October 2019 - Published on Amazon.com
Verified Purchase
I bought this to replace an old west bend single probe unit that finally gave out. The display still works, but the probe failed. I really don't need a dual probe unit, but with 2 probes I always have a backup. The first thing I did was to put one probe in a glass of ice water and the other in a pot of boiling water. both sides read 32 and 212 exactly, so I was pleased with the accuracy. I haven't done anything else with it, so I may update this review if needed.
Read more
5 people found this helpful
Go to Amazon.com to see all 280 reviews 4.6 out of 5 stars
Back to top
Get to Know Us
Connect with Us
Make Money with Us
Let Us Help You
© 1996-2021, Amazon.com, Inc. or its affiliates