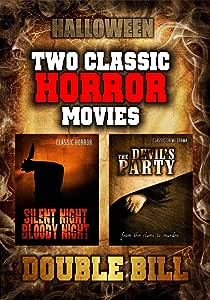 Share
Usually dispatched within 5 to 6 weeks.
International product from outside Singapore Learn More.

Secure transaction
Your transaction is secure
We work hard to protect your security and privacy. Our payment security system encrypts your information during transmission. We don’t share your credit card details with third-party sellers and we don’t sell your information to others. Find out more
Details
Ships from
Amazon US
Sold by
Amazon US
Have one to sell?
Sell on Amazon

Silent Night, Bloody Night Step back in time to the golden age of classic horror. It’s Christmas Eve and Wilford Butler returns to his ancestral home to discover it is now a mental asylum for the criminally insane. However, on the very same day he is burned to death. The locals don’t believe it to be an accident and the institute is closed down. Years later his grandson, Jeffrey, decides to sell the land, but the townsfolk object and soon an escaped serial killer finds refuge there. Anyone who goes near is murdered. Is there a link between the killer and the death of Wilford Butler? Sit back, relax and enjoy the wonderful world of classic B-Movie horror. The Devil’s Party Hell’s Kitchen is a notorious crime ridden area of New York. Four boys and a girl come together to form a gang of their own and are eventually sent to reform school. We join them again years later as they now meet up once a year. One runs a night club, one is a priest, one a singer and the other two become policemen. Can leopards change their spots and what happens now they find themselves all on different sides of the tracks? A dramatic and dark tale from the golden age of cinema.

Share your thoughts with other customers
Write a customer review
Back to top
Get to Know Us
Connect with Us
Make Money with Us
Let Us Help You
© 1996-2021, Amazon.com, Inc. or its affiliates