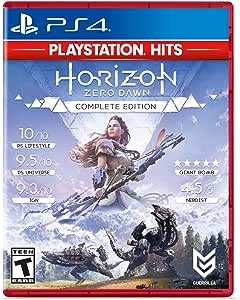 by Playstation
Platform : PlayStation 4
4.8 out of 5 stars 5,893 ratings
Secure transaction
Returns Policy
Your transaction is secure
We work hard to protect your security and privacy. Our payment security system encrypts your information during transmission. We don’t share your credit card details with third-party sellers and we don’t sell your information to others. Find out more
Currently unavailable.
We don't know when or if this item will be back in stock.

Horizon Zero Dawn is an exhilarating action role playing game exclusively for the PlayStation 4 System, developed by the award winning Guerrilla Games, creators of PlayStation's venerated Killzone franchise. Take on the role of skilled hunter Aloy as you explore a vibrant and lush world inhabited by mysterious mechanized creatures. Embark on a compelling, emotional journey and unravel mysteries of tribal societies, ancient artifacts and advanced technologies that will determine the fate of this planet, and of life itself.

In a lush, post-apocalyptic world where nature has reclaimed the ruins of a forgotten civilization, pockets of humanity live on in primitive hunter-gatherer tribes. Their dominion over the new wilderness has been usurped by the Machines – fearsome mechanical creatures of unknown origin. Horizon Zero Dawn is an exhilarating new action role playing game exclusively for the PlayStation 4 System, developed by the award winning Guerrilla Games, creators of PlayStation’s venerated Killzone franchise.

J
4.0 out of 5 stars great gameplay and graphics, feminist story.
6 October 2019 - Published on Amazon.com
Verified Purchase
If you just want to play an enjoyable game, with well executed gameplay, nice graphics, and a basic upgrade and loot system while fighting robot dinosaurs, this game is great. The expansion pack included in the complete edition adds maybe 10-12 hours of gameplay, and a bit higher difficulty with tougher enemies.

The story is interesting overall, but a feminist mess. Think matriarchal tribes, mostly male bad guys with mostly female good guys. Also pretty ridiculous to think that a girl who weighs maybe 120 could take out a metal robot with a spear or pull a bow with a heavy enough draw to put an arrow through one. If you can ignore this sort of thing and just enjoy the gameplay, then I highly recommend it.
Read more
134 people found this helpful

Lisa Williams
5.0 out of 5 stars Super graphics, great fun!
25 July 2019 - Published on Amazon.com
Verified Purchase
So far so fun. The animation is astonishing. Sometimes it feels like I'm playing a movie. I love that it has adjustable difficulty. Sometimes i don't like the frystration of difficult gameplay. I'm not as agile as i was when i was younger...
Read more
68 people found this helpful

What makes this game so fun? For me, it was the fast paced hunting of giant machines and the depiction of a distant future where humans live in primitive societies intertwined with ancient technology that they can barely begin to understand the true power of. I loved watching Aloy gain an understanding of the world and the ancient technology. Throughout the game, she learns more and more about the old world, what happened, and how all of this technology works. By the end, she is casually making conversation with AIs that many believe to be Gods. Listening to old recordings left by the ancients is chilling, relaying personal accounts of people's lives before, during, and after the sudden and unforeseen apocalypse as they race to try to save mankind in an unexpected way.

Another honorable mention is the inventory management and crafting system, which I found to be very accessible and useful. There are many different options for you to choose from, but not so many to be overwhelming. And while you CAN spend all of your resources stocking up on all different types of weapons and ammunition, you can absolutely get by with just the simple bows and arrows, some stealth, and some skill. Upgrading gear is as simple as purchasing the next tier and socketing your gear with the glyphs that suite the weapon and your play style best. Eventually you can get a skill that allows you to unsocket items, which will come in great handy for experimenting with different builds in the late game.

Personally I go full damage on hunter bow, full tear on sharpshot bow, damage/fire on tripcaster, maxed out stealth armor for anything out of combat or trying to sneak out of combat, and ancient armor during combat.

While the game is not perfect (it does have a few bugs and weird animations), it managed to draw me in like no game has in a long time.

Dmitry's Garage
3.0 out of 5 stars Might make a better MMO for those that like to grind.
17 September 2019 - Published on Amazon.com
Verified Purchase
A solid meh. Graphics are superficially good, but environments aren’t nearly as interactive as some other AAA games. The battle mechanics are super crisp and very well polished. This is the best part of the game. They truly captured the feel of being a badass warrior bouncing off the walls slaying everyone in sight vs. the jelly legged clumsy feel of most other games. This is the same polished feel half-life had, the battle is yours to lose, no excuses. However, unlike half-life the story never develops. It feels as if the developers ran out of budget after making the giant open world and didn’t bother filling it with exciting character content. I have rarely felt so uninterested in the success of my character.
Read more
29 people found this helpful

Treasure
5.0 out of 5 stars Lovely, Refreshing, Motion Sickness
20 September 2019 - Published on Amazon.com
Verified Purchase
I’m not even half way done with this game, but it’s very original and the upgrades are simple enough where you don’t have to look up tutorials (like the new god of war). It’s a lively story that offers a lot of freedom in a (‘sandbox’ is it called?) atmosphere. The beasts are fun and you get to decide how to take them down. It sort of reminds me of Metal Gear Solid in some ways. Great story, personal choices and styles run the gameplay and you go at your own speed. Stealth usually goes very far in this game. So refreshing when all the major games are basically remakes! I’d your’e looking for a fresh game pick this one up! It’s rayed that well for a reason! I also love the changing terrain and night and daytime effects, rain. Just be aware of getting motion sick (taking a break) if your doing lots of combat (you probably will be) and only if you run into motion sickness issues (I do) but not usually in video games like this! Sit back far enough away from the t.v! This one has got some tricky camera movement that are required of you!
Read more
13 people found this helpful
Go to Amazon.com to see all 586 reviews 4.8 out of 5 stars
Free & fast delivery, movies and more with Amazon Prime
Prime members enjoy free & fast delivery, exclusive access to movies, TV shows, games, and more.
> Get started
Back to top
Get to Know Us
Connect with Us
Make Money with Us
Let Us Help You
© 1996-2020, Amazon.com, Inc. or its affiliates