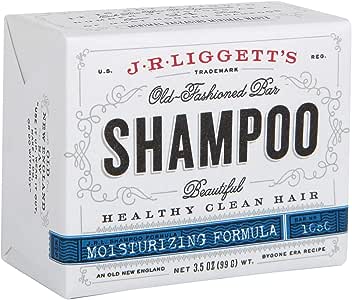 Made from pure natural vegetable oils. No detergents. No synthetic fragrances. No preservatives. No animal products or testing on animals.

We completely support the ethical treatment of animals.

J.R. LIGGETT'S - The Brand You Trust

Hand-Cut and made using a centuries-old recipe, no two of our J.R.LIGGETT’S Shampoo Bars are exactly alike! We make them the way they did over 100 years ago here in New England.

Made without synthetic oils, detergents or chemicals, it's a very mild sulfate-free shampoo. Perfect for permed, colored and naturally curly hair. It offers clean, healthy, beautiful hair without stripping all your natural oils.

A blend of rich oils like Olive, Coconut and Castor Oil nourishes your hair with antioxidants and Vitamins A, B & E which can rejuvenate dull hair.

4.0 out of 5 stars
4 out of 5
1 customer rating
How are ratings calculated?
To calculate the overall star rating and percentage breakdown by star, we do not use a simple average. Instead, our system considers things like how recent a review is and if the reviewer bought the item on Amazon. It also analyses reviews to verify trustworthiness.

Peter Galvin
5.0 out of 5 stars The clouds above me opened, and the angels rejoiced in Paradise.
9 October 2016 - Published on Amazon.com
Scent Name: Jojoba and PeppermintVerified Purchase
The only reason I'm giving this product a 5-star rating, is because that is the unfortunate limit Amazon has set for me as my maximum rating. Would that it were possible to rate higher, I would. As it is, bear with me for just a few minutes as I wax rhapsodic.

I'm a guy with medium-long, curly, coarse, dry hair that flakes like a blizzard if I wash it with shampoo, and greases up like oil flowing over the beard of Aaron if I condition it, including "conditioning" with natural oils.

I have tried everything. I have tried minimal washing (produces greasy hair with dandruff [how is that even possible?]). I have tried aggressive "softening" lotions, which smelled like silicone caulking. Probably because they were. I have done "no-poo" for months, only to finally break down under the buildup of dirt and grease, because my hair is completely unresponsive to brushing, and turns into a frizzy poodle-do. Baking soda and vinegar? Tried it, wanted SO BADLY to love it, but with a combination of hard water and substantial sebum production, it just fell flat, much like my hair beneath it.

Enter J.R. Liggett. I do not exaggerate when I say this product is an epiphany. Yes, an epiphany. Two days ago I stepped into the shower, depressed about med school, depressed because I missed my fiancee, depressed because my hair looked like crap, but I wasn't willing to cut it. I stepped out of that shower a new man. I admit I had a momentary panic attack when I first began to lather. After about four swipes of the bar across my hair, I began the usual fingernail-against-scalp routine, and this soap literally ERUPTED into suds. It produced enough lather for me to wash my face, my beard, and a good portion of my body. (Side note, the mild peppermint tingle produces a particularly enjoyable experience.) Inside my head and perhaps to the empty bathroom, I screamed, "NOOO!!!" Lather is bad, lather like that means my hair is DESTROYED for the next two weeks. Every microgram of oil is now gone, excoriated from my rough, coarse tresses....

I swallowed my sob and rinsed.

And then something magical happened. As I rinsed my hair, it felt lighter, freer, the strands gliding easily through my fingers. There was none of that squeaky, waxy, plastic-y friction, so familiar to me after shampooing. It just felt... Clean. As an insurance option, I had prepared about a tablespoon of apple cider vinegar in about 12 oz water, and I used about half of this as a "conditioning" rinse. As I rinsed this final concoction from my hair, all my doubts, all my worries, all my depression were washed away with it. Because DAMN my hair felt fine! I dried that glorious mane of thick, chestnut curls and I won't deny that I may have shaken them from side to side, just to revel in the sheer pleasure of MOVEMENT in my hair.

Today is now D+2. Some of the afterglow has subsided. Life outside my apartment, outside my Grecian curls, has intruded into my mind. But guess what? I haven't had to shampoo my hair yet. I rinsed it with water twice (when I showered yesterday and today), and used a slight dab of coconut oil (just because), and it STILL feels great! It's still light, it's still curly, it still has movement and body. It still hasn't frizzed up, it still hasn't greased up, and it still hasn't produced the Himalayan snow cap of flakes about my shoulders that has plagued me since high school. And when the inevitable happens, and I do need to use this shampoo again (probably tomorrow), I won't be dreading it. For the first time in my life, I will WELCOME it! Deus laudetur!

So that's it, that is my review. Just buy it, people. Yeah, the bar is small. But guess what: You use a tiny bit once to twice a week; it'll last you months. Yeah, it's $7, which is like $2/oz. But did you not read what I wrote above?!?! It's magic, people! For the cost of a "Vente" specialty coffee drink (probably pumpkin, because "It's Fall!"), you can Change. Your. Life.
Do it.
Just do it.
Adieu.

Dana Eipper
5.0 out of 5 stars Hooked since the first time I used it.
5 May 2018 - Published on Amazon.com
Scent Name: MoisturizingVerified Purchase
I have been using this product for several years now and I will never go back to liquid shampoos and conditioners. My hair has never been better, felt better, looked better, etc. And I get compliments all the time! That never happened before. :-) I would highly recommend this product to anyone looking to have clean, soft, shiny, beautiful hair. Good for my beard too!
Read more

martin
5.0 out of 5 stars Much more than I expected.
27 July 2018 - Published on Amazon.com
Scent Name: Jojoba and PeppermintVerified Purchase
This will be a multi part review. I got the product today in the mail. Just to let you know this is not a full size bar. It is about a third of the size of a regular bar of soap. I have purchased other shampoo bars on here and they were the same size as a regular bar of soap. As soon as I try this I will let you know if it is worth the price for the quality of the shampoo bar. I can tell you it smells amazing even when wrapped.

Okay, part 2 of my review. After getting the chance to take a nice relaxing shower, I was able to unwrap J.R. Liggett's shampoo. First off again the smell of peppermint is just so enticing, then what i noticed most is that it really give you a luxurious head of shampoo, the suds are great and if you allow it to sit for a short while you start to fee a pleasant tingle on the scalp (made me want to use it all over my body - but i didn't) then rinsing it out was a breeze and it left my hair squeeky clean. After a quick towel dry, the comb went through my hair without snags and even after about 10 minutes I still felt the cool tingle on my scalp. It was quite pleasant.

I did a little more inspection on comparisons and the bar even though it is not as wide as other bars it is much thicker. The next part of the review will be after I have used the bar until gone to compare the number of washes with other types of shampoo.

After this part of my review I am raising the number of stars from 3 to 4+ with the hope of part three raising it to a 5.

Okay, I just ordered a new bar today. I am now raising my stars to 5. The reason I am raising my number of stars is because of how long this bar has last and it has had an unexpected results as well, it has made my hair much more healthy looking, it has helped greatly with scalp issues ( peppermint and jojoba are both good for dandruff ) plus all the reasons I have listed earlier.

J.R Liggett's has made a believer out of me.
Read more

NutritionNut
5.0 out of 5 stars Great, if you know what to expect...
23 January 2016 - Published on Amazon.com
Verified Purchase
These shampoo bars are not for everyone. If you are moving from traditional shampoo to more natural ones you'll have to adjust to the changes in your hair when using these types of products. Since your typical shampoo strips your hair of the natural oils, new users might feel like they have greasy hair, etc.

TIPS FOR NEW USERS:
RINSING - Rinse, rinse, rinse! Extra rinsing is crucial if you use natural shampoos, otherwise you'll feel like you have soap residue in your hair.
FOR LONG HAIR: I have long hair, so I cut off shavings of this bar (about 1/3 of the bar) and put it in an old pump soap dispenser, then added distilled water (or use purified). By doing this, a bar lasts me about a month, whereas it was lasting about 2 weeks before.
Being able to pump out the suds, instead of rub the bar all over my head also allowed me to shampoo more efficiently, without getting my hair all tangled up by working the actual bar of shampoo throughout.
Read more
252 people found this helpful
Go to Amazon.com to see all 2,913 reviews 3.6 out of 5 stars
Free & fast delivery, movies and more with Amazon Prime
Prime members enjoy free & fast delivery, exclusive access to movies, TV shows, games, and more.
> Get started
Back to top
Get to Know Us
Connect with Us
Make Money with Us
Let Us Help You
© 1996-2020, Amazon.com, Inc. or its affiliates