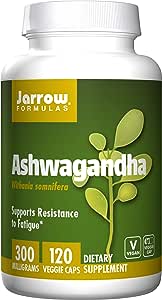 KSM-66 Ashwagandha is an extract obtained from roots. Ashwagandha (Withania somnifera) has been used in the Indian tradition of Ayurveda to support musculoskeletal function and as a tonic to promote overall health.* Experimental studies demonstrate that Ashwagandha is an adaptogen that supports resistance to physical, biological, and chemical stresses and supports endurance, muscle recovery and cognitive health.*

Who Can Benefit from This Product?

Anyone seeking the management of stress and fatigue from a botanical source will find the prospects of Ashwagandha compelling.

Withania somnifera is a small, woody shrub native to the Indian subcontinent and can be found growing wild in the Mediterranean region. It is most commonly referred to by its Sanskrit name, ashwagandha, which means “horse’s smell,” but occasionally it is called Indian ginseng. Ashwagandha has a long history of use in Asia for strengthening the constitution of the body.

The major biochemical constituents found in ashwagandha are steroidal alkaloids and steroidal lactones that are collectively called withanolides. The withanolides appear to act as important regulators of hormonal processes in a balancing—adaptogenic—manner. When there is an excess of a certain hormone, the basic theory contends, ashwagandha constituents occupy receptor sites so that the effect of the hormone is muted. However, when the hormone level is low, ashwagandha constituents actually stimulate the receptor to exert a small effect. This can lead to a state-dependent balancing, or adaptive, effect. One area in which this is important is with the stress response.

D. Buckner
1.0 out of 5 starsSensoril vs KSM-66 Ashwagandha
10 October 2018 - Published on Amazon.com
Size Name: 120 CountVerified Purchase
I have used Jarrow Ashwagandha with Sensoril for years and it worked wonderfully to calm anxiety. However, when they changed to KSM-66, instead of calming the anxiety, it made it much worse! I have had to change to a different brand that is Sensoril. If you have used this and it felt like a stimulant, I encourage you to try a brand with Sensoril! There is a world of difference in how they make you feel! It affected my sister exactly the same.
Read more
38 people found this helpful.

Troy D
5.0 out of 5 starsI thought I'd add my two cents...
11 September 2019 - Published on Amazon.com
Size Name: 120 CountVerified Purchase
I noticed today on Amazon that I had bought this product eight times. That goes to show that I honestly believe it works. I've been raving about Ashwagandha to friends for years now and Jarrow is my favorite brand.

The first time that I realized it worked is when I took four capsules before speaking to a group of nearly 100 community members. Now, I don't have social anxiety, but my heart always races, sweat begins to appear and I start to get anxious whenever I have to speak publicly. After taking the capsules, it was as if I was talking with a group of old friends. I became quite comfortable up there.

Also, this supplement has helped my work out. I can more confidently focus on heavy lifts and I'm able to lift more without tiring out too quickly. For me the best does has been two capsules before a workout. Too much and you may feel too relaxed, having the opposite effect.

The only other OTC product that has had a similar powerful effect on anxiety is NAC. I enjoy both supplements, but if you want the anxiolytic effects w/o the sulfur farts, I'd suggest Jarrow's Ashwagandha. I wasn't paid to do this and there is no incentive. After going through other reviews, I thought it would be helpful to add my own because it helps to hear from the reviews of other customers.
Read more
27 people found this helpful.

TAS
4.0 out of 5 starsI like Sensoril better
10 August 2016 - Published on Amazon.com
Size Name: 120 CountVerified Purchase
This has the KSM-66, which I heard was better than the Sensoril. I began taking the Sensoril (by a different brand: Life Extension Optimized Ashwaganda Extract) and loved it. It not only relaxed my racing mind, but gave me a boost of energy. I seemed to come out of my mild depression too and felt overall positive. After reading about KSM-66, I decided to give it a shot. It made me feel different. I didn't feel as calm and my racing thoughts returned. I also become a little on edge. It didn't occur to me at first that it was the KSM-66. I decided to switch back to the Sensoril and within one day, I had the calm mind and a boost in energy. Everyone's body chemistry works differently, so what works best for me, may not for you. It is my opinion, that one should trying both the Sensoril and KSM-66 to see (at different times, of course). I had tried just powdered Ashwagandha a few years ago and felt nothing from it after 2 months, so I stopped taking it, but again, some people report great results with just the powder. I think the different types of Ashwagandha is subjective to body chemistry, age, and maybe medications that are currently being taking. One thing is clear, I won't be without it! I've never taken an herb that has had such a noticeable impact on me!
Read more
56 people found this helpful.

Amanda
5.0 out of 5 starsOne of the only things I've found that naturally helps ...
21 January 2017 - Published on Amazon.com
Size Name: 120 CountVerified Purchase
One of the only things I've found that naturally helps regulate my nervous system and help my anxiety. You have to be completely consistent. One morning and one at night. I moved down to one a day once it started evening me out. When I am extra stressed I move back up to two a day. Please try this if you need help with anxiety. It has a huge range of other benefits as well. Just do some research! I've not tried another brand yet.
Read more
33 people found this helpful.

KeshiaO
5.0 out of 5 starsHighly recommend!!!
28 February 2019 - Published on Amazon.com
Size Name: 120 CountVerified Purchase
After taking this consistently for about 2-3 weeks, (one per day - sometimes once in AM and once in PM) I can attest that my stress and anxiety is muted. If that makes sense? I don’t get as worked up or feel the flooding, overwhelming sesnation when something is stressful. I have a very high stress job but i don’t feel overwhelmed. It’s almost like my body doesn’t get to that threshold of what it used to prior to taking this. Discussed this with my husband and he said the same thing. Highly recommend it.
Read more
13 people found this helpful.
Go to Amazon.com to see all 200 reviews 4.1 out of 5 stars
Free & fast delivery, movies and more with Amazon Prime
Prime members enjoy free & fast delivery, exclusive access to movies, TV shows, games, and more.
> Get started
Back to top
Get to Know Us
Connect with Us
Make Money with Us
Let Us Help You
© 1996-2020, Amazon.com, Inc. or its affiliates