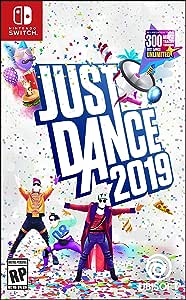 by Ubisoft
Platform : Nintendo Switch
4.7 out of 5 stars 996 ratings
In stock.
International product from outside Singapore
Arrives: 29 - 30 July

Fastest delivery: 22 - 24 July Details
Ships from and sold by Amazon US.

Just Dance 2019 is the ultimate party game with 40 hot tracks from chart-topping hits to family favourites, including "Finesse" by Bruno Mars Ft. Cardi B., "Bang Bang Bang" by BIGBANG, "Shaky Shaky" by Daddy Yankee and more. Dance to 40 hot hits, from "Finesse (Remix)" by Bruno Mars Ft. Cardi B. and more. Jump into an even more personalized experience, with a new curated homepage. Eight exclusive choreographies created with the help of kids' development experts to encourage healthy movement - Join even more multiplayer events and online parties with a revamped World Dance Floor.

Braden Pickering
4.0 out of 5 starsA refreshing return to form
30 October 2018 - Published on Amazon.com
Platform For Display: Nintendo SwitchEdition: Standard
I have kept up with the Just Dance series from the beginning and own almost all of them to date – Parts 1, 2, 3, 4, Summer Party, Greatest Hits, ABBA, Michael Jackson, JD2014, JD2015, JD2016, JD2017, JD 2018 – and now JD2019. Not only are they incredibly fun, but they also serve as my primary workout regime. In 2012 I had cancer surgery which kept me off my feet for some time, and Just Dance really helped me bounce back and lose upwards of 60 pounds that first year with very little modification to my diet. I continued to dance literally every single day for about three years, resulting in not only a slimmer, more toned body, but I also FELT better than ever. Unfortunately, after my cancer resurfaced in 2016, the ensuing surgeries and permanent nerve damage have prevented me from exercising on the level I used to, but I do still like to pop these games in every once in a while and was happy to pick up the latest. But enough of my sob story. I only wanted to mention these things now so any criticisms I might make come off as more credible and not just the rantings of a casual player who simply can't keep up with the steps or hold the controller properly. Trust me, I know these games inside out by now, lol.

So that said, I will admit that the last few installments of Just Dance have left a somewhat bitter taste in my mouth in a lot of ways, but I promised myself I would give it one more chance before giving up on the series completely. Luckily, I am happy to report that JD2019 serves as a refreshing return to form, and has instantly become my favorite installment in at least four or five years. My biggest beef lately has been with the choreography itself, because it has degraded to not much more than bizarre hand posing and random flailing about, with no relation whatsoever to the music, which has proven rather frustrating. JD2019, however, makes an effort to create iconic dances that are actual routines with beat and repetition, like something you might see performed on a stage, which not only makes it easier but much more fun to play. The graphics are colorful and fluid and you get to play as a variety of whimsical characters, and I appreciate that they reined it in just a bit with all the dizzying visual effects and other “stuff” happening onscreen which at times made it very difficult to see what your dancer was supposed to be doing.

The tracklisting will be hit or miss depending on who you ask because this is, by far, the least mainstream entry in the series. Almost none of the songs are current, and the small selection of radio hits we do get by well-known artists such as Britney Spears and Maroon 5 are a few years old by now. Overall there has been a major shift toward Latin and world music, which is not necessarily a complaint for me, but I can see why others may be disappointed. But, like I said, the choreography is good and the motion tracking with the Switch joy-con is fair, though some straightforward moves such as pointing your hand to the sky still fail to register on occasion. My one true complaint, if I had to make one, is that I feel they once again included way too many group dances, because they really aren’t dances at all so much as little scenes or skits. This approach may be more fun in the context of a party or group setting, but they offer nothing in terms of exercise and it’s completely useless for a solo player like me who plays these games only to get fit. At this point I feel they really should just make an offshoot “Just Dance Party” series or something instead of wasting so much space on the main games.

The staple Just Sweat and online World Dance Floor modes return, as well as a small selection of tracks geared towards younger kids specifically. There are still plenty of avatars, stickers, and alternate choreographies to unlock, so a good amount of time could be spent playing this to completion if you like, and the revamped menu interface is a breath of fresh air making the whole thing much easier to navigate. (The change may be jarring to followers of the series, but as a long-time player myself I assure you, it’s better this way.) I should point out that while JD2019 does include a free 90-day trial of Just Dance Unlimited, which is basically an online database of over 300 tracks from games past, it is mandatory you have a Ubisoft Club account in order to access it which is an odd change from the last few games where nothing else was required.

Overall though, I think JD 2019 is a solid entry in the series, embodying the fun and whimsy of the earlier games but with a modern polish that doesn’t compromise the gameplay itself (JD2018 I’m looking at you). Even though I’m not quite the dancer I used to be I can certainly appreciate that they keep making these games at all and continue to appeal to a wide range of demographics. Whether your goal is to shed a few pounds or just goof around for a few minutes, everyone should find at least one thing here to love.

Nelson
3.0 out of 5 starsDoesn’t include many songs.
29 November 2018 - Published on Amazon.com
Platform For Display: Nintendo SwitchEdition: StandardVerified Purchase
There aren’t many songs included in this. You actually have to spend more money to download all the fun songs. Once we paid the extra money to download we had a whole library that we liked but wish they would have just charged a little more in the beginning rather than lure you in only to pay more later.
Read more
100 people found this helpful.

WebStyle
1.0 out of 5 starsDeceptive pricing practices.
2 January 2019 - Published on Amazon.com
Platform For Display: Nintendo SwitchEdition: StandardVerified Purchase
Bought game and now to play most songs they want you to buy an upgrade. This is deceptive.
I bought the game. I could understand if a year from now there are more songs and it’s costs Ubisoft extra money in licencing fees and so they want to charge for an upgrade (for new content). But out of the box is deceptive pricing.
I agree with other users to pay $20 for a demo is ridiculous
Read more
63 people found this helpful.

Andrew Yi
5.0 out of 5 starsWife and the kids love it!
26 December 2018 - Published on Amazon.com
Platform For Display: Nintendo SwitchEdition: StandardVerified Purchase
I'm not a big fan of Just Dance series as I think it's overpriced and require Ubisoft Unlimited if you want to dance to more than 40 songs that's included in the game. The good thing is that you get 1 month trial when you purchase the game and gain access to hundreds of different songs. I honestly think they should sell the game at the regular Nintendo game price of $50-$60 but permanently include all published songs. Despite my unlikings, the wife and the kids absolutely love the game and hence the 5 stars. I don't like playing the game; however, I really enjoy watching my wife and the kids play. The game occasionally go on sale for $19 so give it a try when they go on sale if you're thinking about it :)
Read more
22 people found this helpful.

Aidan Beltran
5.0 out of 5 starsChanges to the game!
14 November 2018 - Published on Amazon.com
Platform For Display: Nintendo SwitchEdition: StandardVerified Purchase
Just Dance 2019 has improved quite a lot since previous Just Dance games. Firstly, the song list has been by far the best one yet.

Second, using different art styles for the coaches and the background was very creative of them to add since previous games had the same “art styles” since I could remember(e.g., claymation, 3D animation, Graffiti, etc.)

Third, although the menu has changed drastically I do have mix feelings. It’s not my cup of tea but I do like the idea they changed it since they used the same format for many years.

Overall, Just Dance 2019 is such a fun game I highly recommend anyone who is new to the game or wants to come back
Read more
19 people found this helpful.
Go to Amazon.com to see all 548 reviews 4.7 out of 5 stars
Free & fast delivery, movies and more with Amazon Prime
Prime members enjoy free & fast delivery, exclusive access to movies, TV shows, games, and more.
> Get started
Back to top
Get to Know Us
Connect with Us
Make Money with Us
Let Us Help You
© 1996-2020, Amazon.com, Inc. or its affiliates