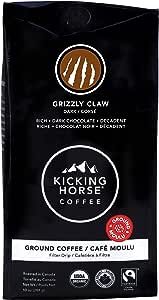 Flavour: Grizzly Claw - Dark Roast
Technical Details
Additional Information
Feedback
Would you like to tell us about a lower price?

Actual product packaging and materials may contain more and different information than what is shown on our app or website. We recommend that you do not rely solely on the information presented here and that you always read labels, warnings, and directions before using or consuming a product.

Rich, dark chocolate, decadent. From the heart of the mountains, a strong spirit roars. This is the most magical hand mother nature can deal, and it's headed for a mug near you.

From the heart of the mountains, a strong spirit roars. This is the most magical hand mother nature can deal, and it's headed for a mug near you.

Big Ideas. Things That Matter & Why

WarriorHockey21
5.0 out of 5 starsBattle=won!
16 March 2018 - Published on Amazon.com
Verified Purchase
Short story long... We love a good coffee, so taste, profile, body, acidity etc. all need to be spot on to make the cut. The best way to get what you want, how you want it is to buy the raw beans, roast and grind yourself. But who has time for that?

So we decided to have another kid... I love the kid, but he has the lungs of a screeching spider monkey that just hit the lottery. So getting the average of 30 minutes of sleep at a time, our Nespresso and Keurig single cup makers couldn't keep up come morning. I know what you're thinking, (you say you're a coffee snob but you use a keurig?!" .. Yes.. when you're getting negative sleep each night, convenience is nice. Not saying it's a great cup of coffee, but it satisfies well enough. The Nespresso makes a pretty solid cup of coffee, but the cost per pod is much higher. I can't afford to spending all that money for pods with as much as we're drinking lately... that's like a Ferrari a week. So here we are... with a drip pot. Add that to our pour over, french press, two pod makers, moka... our house looks like a Starbucks on steroids. But hey, for the sake of quantity and money, we'll give it a shot. So I went in search of a great roast...

This was the real uphill battle.. a battle that took us through every roast on the store shelves, and many through Amazon. We searched high and low for a good roast, our taste buds longing for a good cup of coffee... but all we found was bitterness, weak roasts and acidity that would make drinking from a car battery enticing. We tried to fine tune amounts... ultra filtered water.. we even mixed various roasts together, which actually helped.. but who can live like that?! So the journey continued... with fear we may never have good coffee again. Sure, at this point going on -5671 hours of sleep, the caffeine was a primary issue, keeping me from turning into Gollum... and we were still being supplied that. But our taste buds longed for something good again. Our search continued, until one day we were at a discount store and bought a bag of Kicking Horse to try. At this point, with all the money we were wasting on bad coffee I practically had to work overtime and get a second job.. (just kidding... but seriously...) we started grabbing some to try at the discount store. Brought this puppy home - our first bag of Kicking Horse - and was excited to try it. I looked at the bag and my heart dropped like a lead balloon. On the side, it said "Decaf". After shaking my head in shame and wondering what my wife was going to say about my man card, I decided to try it. To my surprise, it was a very good roast... especially for a demonic, perverted thing like Decaf! But we still needed caffeine... we'll keep that Decaf for a rainy day when we no longer need the caffeine.. like when the kids get married or something.

This whole occurrence however, was my gateway to Kicking Horse. We decide to try some of their other roasts, since the Decaf reeled us in. I ordered the Three Sisters, Kick @$$, and Smart @$$. We usually like a darker roast, so I thought I'd like that one best, but I found it a little weak to be honest. Still good taste, and no bitterness... kinda like that good old hunting dog. He's a good dog, loyal, but doesn't really help you out. Then I tried the other two, and Three Sisters blew my socks off! For a medium roast, it was a nice strong roast. No bitterness or harsh acidity, and the flavor profile was amazing! My first taste of this was Heavenly... as if the angels were singing. Seriously... if I could tap an iv of this straight into my bloodstream I would.

So there it is... best roast I've had in a long time. My only regret is that they don't sell it by the pallet full.
Kid still sleeps horrible, but hey... at least we can have a good cup of coffee in the morning that not only gives us caffeine, but also is enjoyable to drink. Thanks, Kicking Horse!!
Read more
194 people found this helpful.

Dee
1.0 out of 5 starsAmazon Packers need assistance with using a rubbish bin
12 September 2018 - Published on Amazon.com
Flavour: Smart Ass - Medium RoastVerified Purchase
This isn’t a review for the coffee itself, but the packaging job. Looks like the packer dropped their chewing gum right into this little crevice. Disgusting! I thought it was a tape ball at fist, then I grabbed and it felt like tacky. Then I smelled it....minty fresh. Sooooo gross!
Read more
91 people found this helpful.

Steve O
5.0 out of 5 starsGreat coffee and my new favorite
8 October 2019 - Published on Amazon.com
Flavour: Grizzly Claw - Dark RoastVerified Purchase
Let me take you to a place in northern Ohio. A place where a guy ordered coffee and over the course of a weekend he fell in love... And I mean that. I purchased grizzly claw and I LOVE it! It's not bitter, it's smooth and easy to drink. It's dark. Very dark but the coffee is great. I've tried deathwish coffee, I've tried black rifle coffee and this hands down is in another league. You can taste notes of hazelnut and I'm not a fan of hazelnuts ever but this coffee is seriously phenomenal. I'm sold. I'll be trying their other flavors very soon. Dark blend lovers, you will not be disappointed. Light blend lovers, this isn't over roasted or bitter at all. Give it a chance. I promise at the very least you won't "not like" it
Read more
20 people found this helpful.

Goldencat
4.0 out of 5 starsAlmost as Good as Gevalia Imported Coffee. Smooth. Quality.
1 April 2019 - Published on Amazon.com
Flavour: 454 Horse Power - Dark RoastVerified Purchase
Liked:
Grind is on the finer side - works for several methods of brewing.
Flavor: distinct personality, but not overwhelming.
Smooth, slightly acidic, lingering flavor of beans not 'burn-roast' flavor.
Medium roast lets you taste the flavors you may add to your cup: turmeric, ginger, honey, vanilla...
Organic - so no worries about being toxic from pesticide-laced product.

Disliked:
It comes in 12oz, not 1lb - a common marketing tactic now, because consumers are 'cheap'/demand low prices.
No decaf version.

Worked well with my usual home-cafe fancy drinks, like turmeric-cardamom, honey-turmeric-ginger, whipped cream and vanilla.
Did not feel nauseated as I do after Starbucks coffee ... which is higher caffeine, and commercially grown (in general). No 'acidey' stomach either - so along with Gevalia, it will be on my list of brands to trust.
Read more
19 people found this helpful.

A. Burns
1.0 out of 5 starshas a burnt flavor
19 August 2018 - Published on Amazon.com
Flavour: Hola - Light RoastVerified Purchase
I bought light roast to avoid the burnt flavor, but it still tasted burnt. I DO NOT like burned tasting coffee. I do not recommend this to those who prefer to avoid burnt flavor. Allegro has much better coffees without being burnt.
Read more
22 people found this helpful.
Go to Amazon.com to see all 650 reviews 4.3 out of 5 stars
Free & fast delivery, movies and more with Amazon Prime
Prime members enjoy free & fast delivery, exclusive access to movies, TV shows, games, and more.
> Get started
Back to top
Get to Know Us
Connect with Us
Make Money with Us
Let Us Help You
© 1996-2020, Amazon.com, Inc. or its affiliates