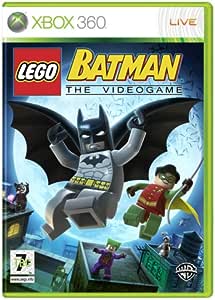 by Warner Bros. Interactive
Platform : Xbox 360
4.6 out of 5 stars 13 ratings
In stock.
International product from outside Singapore


Fastest delivery: 10 - 13 July Details
Ships from and sold by Amazon US.

LEGO Batman: The Video Game is the latest game from the award-winning team behind the LEGO Star Wars series. With trademark LEGO fun and charm, the game takes you into the world of the ultimate crime-fighting hero. LEGO Batman brings the one-and-only Caped Crusader to life in a completely original storyline. Players will take control of the Dynamic Duo, Batman and Robin, to fight Gotham City's most notorious criminals including The Joker, The Penguin, Catwoman, Scarecrow, Killer Croc and many more. The criminals have broken out of Arkham Asylum and are set to wreak havoc on the city. Players will also be able to explore their wicked side and fight their way through the game as the villains, experiencing the game from a completely different point of view with all-new criminal objectives! With a collection of high-tech suits, gadgets and cutting-edge vehicles on hand, players will be able to step into the unique LEGO Batman universe to bring super villains to justice - or, as the villains, to run amok in Gotham City! Fight for justice as Batman and Robin or create chaos as The Joker, Catwoman and other villains, as you save or destroy Gotham City. Rocket through sewers and bound across rooftops as you take the fight to the criminals across classic locations in Gotham City. Fight on land, sea and in the air using a number of powerful Batman, Robin and villain-controlled vehicles, including the rocket-powered Batmobile, sleek Batboat and stealthy Batwing. Enhance the abilities of the Dynamic Duo with all new power suits, including the Magnetic Suit. Play through the game in Story Mode from both the hero and villain sides. Replay any level in Freeplay Mode with any characters you've unlocked. Access previously hidden areas to find additional rewards and bonus content. Collect LEGO studs and special LEGO bricks thro

Zarkoff
1.0 out of 5 starsDoes not save games on an xbox one!
21 July 2017 - Published on Amazon.com
Verified Purchase
Game would not save on an Xbox One
Read more
2 people found this helpful.

Robert Powell
5.0 out of 5 starsFive Stars
12 March 2017 - Published on Amazon.com
Verified Purchase
just what my grandson wanted, kudos!
Read more
Go to Amazon.com to see all 3 reviews 3.2 out of 5 stars
Free & fast delivery, movies and more with Amazon Prime
Prime members enjoy free & fast delivery, exclusive access to movies, TV shows, games, and more.
> Get started
Back to top
Get to Know Us
Connect with Us
Make Money with Us
Let Us Help You
© 1996-2020, Amazon.com, Inc. or its affiliates