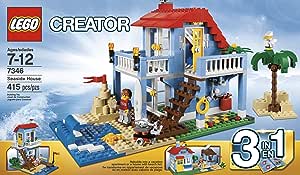 by LEGO
4.5 out of 5 stars 239 ratings
Currently unavailable.
We don't know when or if this item will be back in stock.

Just a Mom
5.0 out of 5 starsIncredible play value
28 January 2013 - Published on Amazon.com
Verified Purchase
My 12 year old daughter received the Seaside house for Christmas this year (her younger sisters also received Legos of various sorts). I knew she was interested in having some Legos (we had had a great time visiting the Lego exhibit in DC last summer) but wasn't sure if this kit was going to be a-build it-once-and-admire-it type activity. Once she (and her sisters) opened the sets, I didn't hear from them for hours. I had to drag them away for Christmas dinner. The 12 year old builds, rebuilds and then builds again. These have not gotten old at all. She absolutely loves the set. This is really a clever set with lots of fun details (lego waves, houselights, palm tree, etc!) She's a quiet, introverted person so the Legos are a perfect activity for her and helps get her away from the iPod/iPad screens. All three daughters (12, 10 and 6) build their houses together and then create stories with their Lego people. Then they tear them down and build them differently. I just can't believe that we were so late to the Lego party. I would have bought these years ago if I had known what play value they had.

My caveat would be don't be put off by the 7-12 age recommendation on the box. It made me pause prior to ordering because my daughter is 12, the top end of the given range. Seems not to matter at all. It's not too easy but construction of the different house styles is not too difficult. It's just perfect - just enough challenge but not frustrating. Really, it should be ages 7-100! I also love that the Creator sets are unisex and appeal to either gender. One more warning - some of the pieces are quite small and sometimes the girls need help prying pieces apart. Not a big deal. My other critique of Lego would be that there seem to be SO many sets and themes geared towards boys that it is hard to find sets that are gender neutral. My girls aren't into Star Wars or Harry Potter. But, these Creator sets are 100% worth the money and I'm looking forward to buying more if new models come out in 2013.

The Smiths
5.0 out of 5 starsSeaside House a good choice for young LEGO fans
28 November 2013 - Published on Amazon.com
Verified Purchase
As the ECE-savvy parent of a typically LEGO-obsessed Kindergartner, I'm always looking to make this toy more open-ended, starting with filing away the instructions as soon as my child has used them once so he can experiment with designs of his own making. Don't get me wrong -- the instructions add their own layer of learning/play, by encouraging mathematical thinking and teaching concepts like how to place the bricks for durability or ease of deconstruction. But my kiddo gets the most fun and learning from exploring the bricks without instructions.

This Seaside House set, from the Creator series, was a hit for the colors -- sand and light blue -- as well as some neat new pieces to our collection including palm tree pieces and big french doors with clear "glass." The completed constructions were fun not only to build but to play with. My son appreciated how the houses extended into landscape (true beachfront property) and the little "extras" like the sand castle, crab, espresso machine (seriously?! cute), and river with bridge.

I prefer the Creator series to LEGO's other series because:
* colors are more vibrant and earthier than the grey/black-heavy City series or various series with branded character/theme (lots of blues, greens, browns, golds, reds)
* the objects are from real life (houses, boats, animals, etc.), allowing children to identify with them while leaving fantasy designs such as dragons to the kids' own imaginations
* three sets of instruction means more play value
Read more
3 people found this helpful.

Used to Write
5.0 out of 5 starsThis Lego set is a ton of fun and lends itself to expansion and use of imagination
10 July 2014 - Published on Amazon.com
Verified Purchase
This set, like most "Creator" sets, is a 3-in-1 set. One can choose which style seaside house he/she wants to build. Very clear directions are included for all the options.

This set does not come with a large building base, but instead comes with several small plates that get connected together to form the building base. This works adequately well, and does seem to be the "norm" now. I choose to build the house on a large Lego building plate to strengthen the build and to be able to attach the "random" pieces (palm tree) that are not designed to be attached to the other building plates.

I have now built all three of the options as instructed and found that, for an adult, they were all relatively easy builds. When I provided the set to an 11-year-old and 8-year-old, they had no problems building the two easier builds, but struggled with the house build because the top floor is fragile, and they couldn't get everything attached without help.

After trying out the three builds Lego recommends, we built the most-advanced build, but modified it by adding a TON more bricks to make the house a seaside "mansion." :)

This set is very cool, and some of the details are quite interesting. For example, the house has an outdoor shower with towel rack, and it also includes directions and blocks to make "rolling waves." These are details I wouldn't expect in a set that it priced to be one of the more "introductory" sets.

There are also some other neat details in this set, including an osprey or eagle that sits in the palm tree, a small sandcastle, and a mounting "hook" for the surfboard.

This set comes with several more-rare pieces, including:
* pale blue bricks
* a silver fish
* an orange crab
* a white surfboard

The ONLY "cons" I found with this set are:
* The building plates can be tough for kids to all fit together without assistance
* The set only comes with one mini-figure
* There are few details inside the seaside house
(None of these "cons" are significant enough to make me downgrade the set's rating)
Read more
One person found this helpful.

DaCarllo McCormick
5.0 out of 5 starsFell in love with it 3 years ago
22 December 2017 - Published on Amazon.com
Verified Purchase
Fell in love with it 3 years ago, and FINALLY got the nads to get... no matter what the Mrs. says!
I haven't built it yet, but it's gong into the new fishing town I'm creating for the spring.
THANK you.
Read more
One person found this helpful.
Go to Amazon.com to see all 231 reviews 4.3 out of 5 stars
Free & fast delivery, movies and more with Amazon Prime
Prime members enjoy free & fast delivery, exclusive access to movies, TV shows, games, and more.
> Get started
Back to top
Get to Know Us
Connect with Us
Make Money with Us
Let Us Help You
© 1996-2020, Amazon.com, Inc. or its affiliates