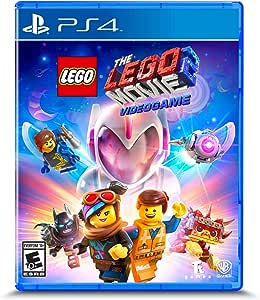 Fastest delivery: 19 - 22 Apr. Details
Ships from and sold by Gold'enQuality SG, from outside Singapore. For information about products sold by international sellers, click here.

Bricksburg is in ruins and Emmet's friends have been taken! Team up with Emmet and a host of heroic characters to save their friends from the strange inhabitants of the Systar System.

The alien monster invaders have left Bricksburg in ruins. It is now up to Emmet and a host of heroic characters to go beyond their world and save their friends from the strange inhabitants of the Systar System. Players can journey into outer space, discover new worlds, and test their Master Building skills.

Ashley
1.0 out of 5 stars Not a traditional Lego game
25 March 2019 - Published on Amazon.com
Platform For Display: PlayStation 4Edition: StandardVerified Purchase
I just want to warn anyone, especially with little kids who might be thinking about buying this game, that it is not a traditional Lego game. I have been playing Lego games for at least 15 years dating back to the original Star Wars games. Played all the Indiana Jones games. The Pirates of the Carribean, the Hobbit, the Lord of the Rings, countless Batman and Avengers games, the new DC villians, and of course dimensions which I loved and played on both the ps4 and Wii U, and of course the first Lego movie video game.

This new lego game, does play like a traditional game in the way that you have standard levels, a fluid story, normal red bricks or normal gold bricks. This game incorporates what are known as "loot boxes," which I hate. In this game throughout each world you search for treasure chests that contain different colored shards or fragments. Some give you characters, some give you red shards which you collect to trade in for a red bricks. You can find whole red relics which are basically the red bricks, but you can only use them while holding them during game play. Meaning you don't just earn and turn on the x'2s red brick and always have it on. You carry around a magnet for attract studs, or you wear a helmet for demo mode, and from what I can see you can't use them at the same time.

Also, there are not straight up levels where you go back and get minikits. So no minikits from what I can see. This game is also incredibly confusing. There are so many menus to go through to figure out how to find anything you collect, or which characters you have. It has been painfully confusing playing this with my daughter, and not fun at all. We just finished the Incredibles, and I wish we had something else to play besides this.

I wish I hadn't bought this disc, and would return it if I could. I hope this is not the direction Lego and TT are going. Again if you prefer traditional Lego game play do not buy this game.
Read more
39 people found this helpful

BrickTracy
1.0 out of 5 stars Can't sleep? Buy this game!
14 March 2019 - Published on Amazon.com
Platform For Display: PlayStation 4Edition: StandardVerified Purchase
This game is so boring!

I was excited to get this, as I really enjoyed the first LEGO Movie Game, and expected something of the same. This one is pointless. All you do, as others have pointed out, is to run around and build things. That's ALL there is to it - collect coins, build, move on. You're not fighting anything, there's no real incentive to build things other than to complete the "mission" of building something. What's the point?

My Wife and I have been playing LEGO games together, and with this one on split screen, one of us will complete everything while the other goes around and collects coins (which I haven't found much use for yet, either). Seriously, if I could return this game, I would. I'd sell it, but I don't want to put anyone else through this unless I could let them know ahead of time it will cure their insomnia.
Read more
24 people found this helpful

Jim Bob
1.0 out of 5 stars An incomplete game lazily designed & a complete waste of money & time!!
19 March 2019 - Published on Amazon.com
Platform For Display: PlayStation 4Edition: StandardVerified Purchase
I usually enjoy LEGO games to the fullest and feel the need to collect all characters and minikits on each level. This is the 1st LEGO game I have ever played where I did not find the desire to do so. For starters, such little effort is put into the games overall design & scope that its a joke. Emmet, the star of the first game & returning character in this one doesn't even have dialogue. the story will take you maybe 4 hours total to beat and the end credits will make you wanna puke. Such a poorly and incomplete IP. I am surprised that the dev's were even allowed to release such a flawed finished product, not to mention the story & activities are all lame and boring. Such a waste of money & time!!! Skip this LEGO game until they can start finishing their games completely!!
Read more
13 people found this helpful

S. Jordan
4.0 out of 5 stars Way More Fun than I Expected (Maybe the Patches Improved It!)
4 May 2019 - Published on Amazon.com
Platform For Display: PlayStation 4Edition: StandardVerified Purchase
IN SHORT: A surprisingly fun LEGO Game that's a nice companion to the excellent film.

IN DETAIL: This game wasn't really on my radar when it first came out; while I love the film THE LEGO MOVIE 2: THE SECOND PART, the game got pretty low scores from critics and was apparently rushed to release to be a part of the marketing buzz for the movie. It also had a pretty drastic price drop within a few months of release.

But, I've got kids who love all things LEGO, so we borrowed this game from the library and tried it out. After a couple of patches downloaded (which I am going to guess greatly improved upon the problems other reviewers have cited), we fired it up and had a really great time. We wound up ordering it from Amazon not long after because they really love it.

The game is structured very similarly to LEGO WORLDS, but isn't nearly as frustrating for my 5-year-old because the controls have been streamlined and the progression of the game very loosely follows the film. While all of the characters play exactly the same (making them easy to switch out when you want to be the Giraffe Man or Watermelon Guy, for example), this game's puzzles are based around items and skills you acquire as you go.

Each of the game's large levels have an open world feel and reward exploration, and a mechanic that allows characters to scale walls and jump aboard platforms in the style of games like UNCHARTED leads to some pretty neat opportunities for levels to open up and try new things. I was really impressed with the boss battles, most of which were really fun and which used the Duplo invaders to great effect.

The 13 levels are extremely varied and often really creative, sometimes integrating characters from the films and from classic LEGO building sets like the Blacktron space series or from modern series like the DC Heroes Justice League. The developers included all of the worlds from the film as well as classic worlds from THE LEGO MOVIE, and there's a surprising amount of stuff to do.

In each of the levels, there are collectibles in the form of master bricks that you can pick up both during the story mode and after you've completed the story. Many of these master bricks are available through missions, most of which are pretty simple "fetch" or "escort" affairs, but some of which require you to solve puzzles or battle bad guys. There are also treasure chests and heart-shaped alien invaders who drop special capsules that randomly unlock building sets, characters and items, giving the game some decent post-game replay value since there's a lot of cool stuff to unlock. Unlike LEGO WORLDS, you don't need different types of weapons for different enemies, and it's a lot of fun to wield some of the wilder weapons in the game. (Even the standard weapons, like Rex's boxing gloves or General Mayhem's Sticker Gun, are pretty useful and fun to utilize!)

My kids really loved the opportunities they had to ride around on Ultrakatty (Unikitty's giant beast form), to ride a Blue Raptor or to pilot Sweet General Mayhem's starship. That they could easily play as the characters from the film or a wide variety of others (including mermaids, DC heroes, Unikitty friends, characters in outlandish costumes and the like) and play the game at their own pace made it all the more fun. They found this game considerably less frustrating than the more linear LEGO games of the past, and they love replaying it even when everything's been collected. (The "red" special items you can earn later in the game give you special powers that make it fun to further explore worlds that are already completed.)

Do I have complaints? Sure. But they're not major:

-The game barely follows the plot of the movie and doesn't include any of the new songs, which are a big highlight of the film. Queen Watevra Wa'Nabi (a standout character in the film) barely appears in the game.

-The vehicles have all received a major slowdown and can only move as fast as the characters, even if they look like they should go fast. It makes the race missions way too easy and pretty pointless.

-There are some bugs in the game that can cause it to crash if too many Legos are spawned. Fortunately, the game saves your progress often, so it's rarely a major setback.

-The controls are still a little clunky because there's so much you can do with the various tools. It can be difficult to explain to a small child how to solve puzzles, though the in-game tutorials are really good at explaining the details.

-There are a couple of missions that are really buggy, including one where you have to take a snapshot of a moon totem but can only successfully do so from the side.

All in all, however, this game is well worth the asking price and will offer about 5-6 hours of story mode and another 10-12 of post-game missions and exploration. It's not as deep as LEGO WORLDS or as polished as the first LEGO MOVIE game, but it's still a lot of fun, and it's a really great choice for younger kids who are fans of the films.
Read more
8 people found this helpful
Go to Amazon.com to see all 88 reviews 4.2 out of 5 stars
Back to top
Get to Know Us
Connect with Us
Make Money with Us
Let Us Help You
© 1996-2021, Amazon.com, Inc. or its affiliates