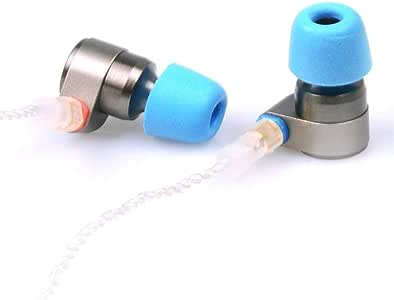 by Linsoul
4.2 out of 5 stars 362 ratings
International product from outside Singapore
4 new from S$70.51

Featuring a dual-driver configuration with one dynamic 10-millimeter woofer and one 6-millimeter tweeter per ear, the Tin HiFi T2 IEM delivers a clean, clear sound. The build quality belies the price, too, with metal housings ending in red and blue plastic rings that differentiate the right earpiece from the left. Equipped with an MMCX connector and a 3.9-foot braided silver cable, the T2 allows for easy cable replacement if needed in the future. It’s IEM’s neutral sound presentation, saying that, for the price, it has“no comparison”. Meanwhile Tin T2 also has super-deep and stable sub-bass, vivid and natural-sounding mids, and sharp and crisp yet not fatiguing treble. It won’t let you down for sure.

Smilin Sam
4.0 out of 5 starsDecent sound/Interesting experiment in perception(s)
2 April 2019 - Published on Amazon.com
Verified Purchase
I purchased these IEMs based upon a review I saw on Z Reviews/Youtube. My standard IEMs for years have been Sure SE215s. I've found them to be comfortable, reasonably accurate, although probably not "audiophile" quality, and fairly priced for what they offer. (I use the standard silicone cushions, not the foam cushions, although I have purchased the Sure yellow foam cushion add-ons; I just don't use them very often.)

My first impression of the T2s was that they were heavy and not that comfortable in my ear. (I used the blue foam cushion tips that came with them.) Out of curiosity I took out a scale to see just how much more they weighed than the SE215s. To my surprise (i.e. perception shattered) they each weighed 11 grams. Shocked.

Sound-wise, I can't say that the T2s wowed me -- at least not at first. While the SE215s aren't known for their bass, and while the T2s are criticized for their lack of bass, I found that the SE215s had noticeably more bass than the T2s. At first. However, after listening more and more to the T2s, I found myself enjoying the music I was hearing -- a lot. I didn't want to drive myself crazy going back and forth between the 2, which I'm sure I'll do over time. But given the option of which IEMs to listen to to tweak .wav files for my collection, I found myself choosing the T2s over the SE215s. And for half the price, I'd say the T2s are a solid choice for all but the most critical applications.

One thing I did find annoying was the way the cables attach. Twice I found that one of the cables had fallen out. That never happened on the SE215s.

I am enjoying the T2s and do not regret the purchase in any way. They're just very different ergonomically than the SE215s and that takes some time to get used to.

Dave
3.0 out of 5 starsBad cable; no customer service
13 December 2018 - Published on Amazon.com
Verified Purchase
9/20/19 update: I wound up buying a more expensive replacement cable (which i believe is the same cable, or at least visually appears the same, as the one used in the new T3s). And I actually wound up a having a pretty good experience with these buds for the past 9 months or so with that more expensive cable. Just recently, one of the buds itself started cutting out. I switched sides to confirm that its the bud itself and not the cable. Ah well. So, in total, and with a more expensive cable, I got about a year out of these before they failed. Honestly-- not bad for the price; I do like the sound quality itself. So I bumped up the star rating on my review a bit... (still haven't heard back from Linsoul from January, btw).

1/15/19 update: I emailed the company at the email address in their reply just now. Will update review with their response.

1/4/19 update: Same problem as below, with new replacement cable. No response from company's social media accounts, and no website or other way to reach them. Garbage. Wish I never bought these.

Original review:
The earbuds themselves are pretty solid, but the cable broke after about two months, with sound cutting out to the left ear. I tried contacting TIN Audio via both their Twitter account and Facebook page, because I couldn't otherwise find an email address for them, but no reply to either. A cheap replacement cable is not too much, but a nicer one obviously jacks the total price up more, at which point I'd rather just get more expensive headphones. Oh well.

Aaron Nall
1.0 out of 5 starsEither I got a defective pair or people are clueless about audio quality
15 April 2019 - Published on Amazon.com
Verified Purchase
I saw a Youtube review claiming these were the best IEMs for the money, that they sounded like a $200+ pair. Now I question whether that guy was paid off to shill these trash quality ear buds. I have a pair of in-line mic Skullcandy ear buds from Wal-Mart that sounds better than this garbage.

Like wow, did I get a defective pair or are people deaf?

Tried in my standard sound card in my PC, got hissing, okay, maybe it's not getting enough power.

Tried in my Galaxy S8, no hissing, sound quality is just as crap.

Oof. They sound like the trash pair of emergency ear phones I bought from a pharmacy because I wanted some to listen to music at work.

If these are defective, give me another set to try and I'll change this review. Otherwise, buyer beware.

Received my 2nd pair. Either also defective (bass heavy and drowned out mids), or these earphones are significantly worse than advertised.

Either way, getting two defective sets in a row? I'm not trying again. What a joke.

Jacob Devera
5.0 out of 5 starsPunches way above its price tag
14 August 2018 - Published on Amazon.com
Verified Purchase
I've dabbled in chi-fi headphones for a while, but this is easily one of the best I've heard. Great detail all-around with a nice focus on vocals. Some people find the bass lacking, and I usually listen to v-shaped headphones, but I think it has just the right amount—and there's a bass mod you can do by covering the vent if you need more. One of my favorite parts about it is that I can push the volume up a bit without the treble being too harsh, making it a very comfortable and non-fatiguing listen.

Build quality and packaging for the price are also pretty solid, and I like that it uses MMCX cables.
Read more
28 people found this helpful.
Go to Amazon.com to see all 258 reviews 4.0 out of 5 stars
Free & fast delivery, movies and more with Amazon Prime
Prime members enjoy free & fast delivery, exclusive access to movies, TV shows, games, and more.
> Get started
Back to top
Get to Know Us
Connect with Us
Make Money with Us
Let Us Help You
© 1996-2020, Amazon.com, Inc. or its affiliates