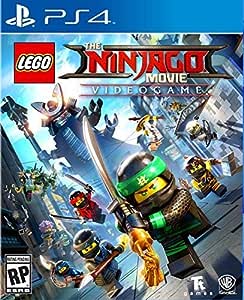 by WB Games
Platform : PlayStation 4
Secure transaction
Returns Policy
Your transaction is secure
We work hard to protect your security and privacy. Our payment security system encrypts your information during transmission. We don’t share your credit card details with third-party sellers and we don’t sell your information to others. Find out more
In stock.
FREE delivery: 26 - 30 Apr. Details

Fastest delivery: 23 - 27 Apr. Details
Ships from and sold by SAHRA SHOP, from outside Singapore. For information about products sold by international sellers, click here.

Find your inner ninja with the all-new LEGO Ninjago Movie Video Game! Play as your favorite ninjas, Lloyd, Jay, Kai, Cole, Zane, Nya and Master Wu to defend their home island of Ninjago from the evil Lord Garmadon and his Shark Army. Master the art of Ninjagility by wall-running, high-jumping and battling the foes of Ninjago to rank up and upgrade the ninja's combat skills. Only in the LEGO Ninjago Movie Video Game will you experience the film across 8 action packed locations each with its own unique Challenge Dojo. And with the Battle Maps, play against friends and family in competitions for up to four players!

The LEGO NINJAGO Movie Video Game will allow players to delve into the world of the new big-screen animated adventure The LEGO NINJAGO Movie. In the game, players battle their way through waves of enemies with honor and skill as their favorite ninjas Lloyd, Nya, Jay, Kai, Cole, Zane and Master Wu to defend their home island of Ninjago from the evil Lord Garmadon and his Shark Army. To do so, they must master the art of Ninjagility which allows them to traverse Ninjago by wall-running, high-jumping and battling the foes of Ninjago to rank up and upgrade the ninja’s combat skills. Players can harness the power of Spinjitzu combat to defend Ninjago together.

Emanuel
5.0 out of 5 stars Perfect for father son bonding
9 October 2017 - Published on Amazon.com
Platform For Display: PlayStation 4Verified Purchase
Great Family Fun, me and my son have fun playing this and unlocking new characters and items! See the movie first so you can relive all of your favorite moments in the game afterwards!
Read more
12 people found this helpful

Jesshawaii
2.0 out of 5 stars Way too short
27 May 2018 - Published on Amazon.com
Platform For Display: PlayStation 4Verified Purchase
I usually fall in love with all Lego games however this one disappointed me. My biggest issue is that this game was way to short. It can be completed in a weekend.

I also missed the ability to collect canisters and replay the story in free mode. Each level is a separate part of the map and once unlocked you can explore and get all the collectables.

R. Wolfe
1.0 out of 5 stars Very dissatisfied
6 October 2018 - Published on Amazon.com
Platform For Display: PlayStation 4Verified Purchase
My son is a huge fan of ninja go and Lego games. So naturally he thought this game would be epic. It is by far in the top 3 most boring Lego games ever made and is ridiculously short. It really let my son down. Shipping and everything was great. My only issue is the game
Read more
8 people found this helpful

Rated R Cars
5.0 out of 5 stars Nice game for my kindergartner
3 March 2020 - Published on Amazon.com
Platform For Display: PlayStation 4Verified Purchase
I got this for my kindergartner. He's a bit young but we played it together and he was enjoying it. Graphics are great. Looks gorgeous on our new LG OLED TV. The colors are so vivid and well done.

The game has nice story telling and plenty of action. It has some comedy too. Highly recommended.
Read more
2 people found this helpful

Pyxie83
3.0 out of 5 stars No really multi-player
14 February 2021 - Published on Amazon.com
Platform For Display: PlayStation 4Verified Purchase
My kids love all the lego games. This one is super fun, but my biggest frustration is that it is only two-player in game mode. The whole reason I picked this game up is because it was multi-player, but apparently that is only in battle mode, which is competitive, instead of team building. I would have liked to have seen this game actually be multi-player in game/story mode so all of my kids can play together. Kind of a bummer.
Read more
Go to Amazon.com to see all 100 reviews 4.5 out of 5 stars
Back to top
Get to Know Us
Connect with Us
Make Money with Us
Let Us Help You
© 1996-2021, Amazon.com, Inc. or its affiliates