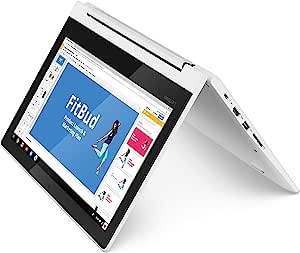 by Lenovo
3.3 out of 5 stars 3 ratings
Secure transaction
Returns Policy
Your transaction is secure
We work hard to protect your security and privacy. Our payment security system encrypts your information during transmission. We don’t share your credit card details with third-party sellers and we don’t sell your information to others. Find out more
New (4) from S$441.97

Faster, simpler, and more secure, the Lenovo Chromebook C330 brings the latest Chromebook features to you in a sleek, stylish, and durable Blizzard White convertible design.

Designed For Those Who Dream Bigger

3.3 out of 5 stars
3.3 out of 5
3 customer ratings
How are ratings calculated?
To calculate the overall star rating and percentage breakdown by star, we do not use a simple average. Instead, our system considers things like how recent a review is and if the reviewer bought the item on Amazon. It also analyses reviews to verify trustworthiness.

C
5.0 out of 5 stars Good battery
14 March 2020
Size: 64GB eMMCVerified Purchase
This lenovo chromebook started up v fast. And the touch screen is v sensitive as well. I think this touch screen function is essential for a chromebook. Been using it after 1st charge. Battery still at 70%, really impressed by it.

But don't expect too much that the chromebook can play game and etc. It's for daily use type of laptop.

Overall, I'm satisfied with my loot!:)

Hngo
5.0 out of 5 stars Great Chromebook! High end features for a low price.
24 October 2018 - Published on Amazon.com
Size: 64GB eMMCVerified Purchase
For the price, this is a great Chromebook. It checks a lot of boxes and I've done my fair share of research.

1. Solid build. Nice sturdy plastic chassis. (Keeps it lightweight)
2. USB type C port, SD card slot, HDMI, and USB 3.0
3. Touchscreen with an IPS display
4. 4 gigs of RAM and 64gig of storage. (rare at this price point)
5. Nice feel to the keyboard and track pad.
6. ARM processor that is optimized for the Google play store apps and runs much better than the Intel celerons you see in most low-end Chromebooks.

You get a lot for $300. You can't really find those options within that price range. The only thing I wish it had was a FHD display. 1366x768 still looks sharp on an 11.6 in screen but it would be super sharp if it was 1080p. I would highly recommend this Chromebook.

Finnigan
5.0 out of 5 stars The most awesomely boring device you'll ever use.
15 January 2019 - Published on Amazon.com
Size: 64GB eMMCVerified Purchase
Over the period of 30-60 seconds after unboxing it for the first time.
1. Turn on
2. Sign in with your Google account.
3. Select wifi network.
That's it, everything is set up, all your Google pictures, mail, bookmarks (from your Android phone, assuming you use chrome on mobile) is all there.
I'm used to spending at least a few hours setting up, updating, uninstalling bloatware, denying "trial offers" on Windows PCs. Nothing on this.
Literally ready for use within a minute.
Windows®, take notes.
Read more
706 people found this helpful

Josh Hartman
5.0 out of 5 stars Far exceeded my expectations
30 November 2018 - Published on Amazon.com
Size: 64GB eMMCVerified Purchase
Full disclosure, I am not an IT professional but use laptops, tablets, and desktop computers daily in my personal and work life. This chromebook has far exceeded my expectations. This is my first time using a chromebook. I have had a week or so to really dig into the device. I own an alienware gaming laptop, but I find myself only using it now for gaming purposes only.

This chromebook is fast in my opinion. The speed is snappy and the device responds quickly to gestures and commands. I have yet to find sometime I can't do on this that I do on my windows laptop aside from gaming. One game I like to play requires windows, mac, or linux. Since this has an ARM processor it does not support linux applications at this time.

Design: This device is a bright attractive white chromebook. I find the design to be pleasing to the eye and appears sturdy even though it is made from plastic. I do not particularly like using it in tablet mode. The screen feels bulky and sometimes unmanageable in tablet mode. The screen quickly transitions to whatever position to place it in whether laptop, tent, or tablet mode. I personal find myself not even using my LG tablet for much of anything except when I need LTE internet away from home. Overall the design is great.

Screen/Input: I find the keyboard to be on par with most laptop keyboards. The keys are a little shallow and I feel my typing has slowed a little bit, but not by much. The IPS touchscreen is very responsive and rarely find myself having to touch the screen more than once for my intended gesture. Screen is bright in home conditions, but feel it would lack in more intense lighting situations, such as outdoors.

Ease of Use: The google play store makes this thing be able to do just about anything. I have not tried any intense applications. I use chrome, netflix, hulu, evernote, several banking apps, and various other apps. All of them are snappy responsive. The bank apps load like they are in phone mode, thus they are in a small window. The apps still work as designed. Netflix and Hulu playback is smooth and pleasant to watch on the screen.

Overall, I am impressed with the Google OS and this device in general. If your someone who is on the fence about the operating system, I suggest you give it a try. The battery life is good as well. When using my gaming laptop its always with a cord tethered nearby. I also understand a gaming laptop is far more power intensive. I have yet to use this chromebook while charging it. The battery has allowed me to watch 4-5 hours of netflix, talk on facebook, and text through my phone without ever getting critically low. I charge it at night and then never put it back on till the next night. This is a max screen brightness. I was also very surprised with the speakers. The speakers were much louder and not distorted. I honestly expected them to be cheap netbook quality that is mostly better just to never use them, but thats not the case with this chromebook. I do generally use a bluetooth headset. The bluetooth headset paired with extreme simplicity. I also set up my brother wireless laser printer with google cloud print in less than 30 seconds.

Google did it right and lenovo delivered a solid product. I did purchase this on sale for $200 but would have spent the $300. If your a web surfer, music listener, netflix watcher I highly recommend this. If you need windows intense software then go with windows. Otherwise I think you'll find yourself using this as your primary device as I have.
Read more
647 people found this helpful

Keith Gindoff
1.0 out of 5 stars Can’t Download Google Play Store App
26 December 2018 - Published on Amazon.com
Size: 64GB eMMCVerified Purchase
Do NOT buy this if you will need to download apps as the Google Play Store app can’t be downloaded on this chrome book. Internet and everything else works fine, but I bought this for my kids to play Roblox and other apps, but this particular chrome book won’t allow the Google Play store.

I had no idea that it was even possible for the Google App Store not to be compatible with a Google Chrome Book!
Read more
591 people found this helpful

Ajax
1.0 out of 5 stars Not sure how I feel about this right now.
25 November 2018 - Published on Amazon.com
Size: 64GB eMMCVerified Purchase
Brand new device, went from 64gb out the box and after the OS update i only have 49GB available. 3.7G are in use by preinstalled apps. So you can subtract at least 15GB from the advertised 64GB description. That said, if you buy the 32GB you'll be severely disappointed.
Read more
595 people found this helpful
Go to Amazon.com to see all 1,435 reviews 3.9 out of 5 stars
Free & fast delivery, movies and more with Amazon Prime
Prime members enjoy free & fast delivery, exclusive access to movies, TV shows, games, and more.
> Get started
Back to top
Get to Know Us
Connect with Us
Make Money with Us
Let Us Help You
© 1996-2020, Amazon.com, Inc. or its affiliates