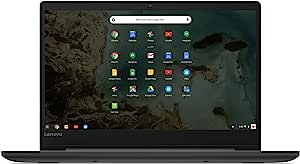 The Lenovo Chromebook S330 is easy to use, offers built-in virus protection and keeps going with long battery life. Further no setup is needed, just a Google account so your stuff stays with you via cloud storage of your emails maps, docs pics and more.

Designed for Those Who Do

Bringing the latest multimedia in high definition, the Chromebook S330 features up to an FHD anti-glare display that is near edgeless, for effortless enjoyment of your favorite multimedia content.

Never slowing down and always up to date, the Lenovo Chromebook S330 offers the latest in digital security while delivering perfect day-to-day performance via powerful processing with integrated graphics, eMMC storage, and DDR3 memory, all with over 10 hours of battery life.

Savini Marco
1.0 out of 5 stars No support from Lenovo
17 May 2020
Style: 4GB RAM 64GBVerified Purchase
I live in Singapore and ordered this product. At first, I was very happy, it did as I expected it to do. However, after a while the WiFi chip broke down; this was confirmed also by a lengthy support call with Lenovo US. However, when I brought the laptop to the official Lenovo store here in Singapore, they were unable/unwilling to help out, as there are no Chromebooks in Singapore. Basically, the product is almost useless now (theoretically usable with tethering the phone using USB, so that no WiFi is used).

I strongly discourage to buy this product if the Lenovo representation in your country won't help you in in case of a problem. For other countries, this may not be an issue.
Read more
Helpful
Report abuse
See all 1 customer reviews
Write a customer review

Jpags
4.0 out of 5 stars First Chromebook
18 January 2019 - Published on Amazon.com
Style: 4GB RAM 64GBVerified Purchase
This is my first Chromebook and I love it. The simplicity of this thing is amazing, I have an expensive Windows 10 PC that drives me crazy, I find Windows has become a very intrusive and confusing computer, that bothers you with a load of notifications and pop ups. Trying to figure out how to disable all that stuff is a real pain, Windows seems to bury all those settings, making them hard to find. This Chromebook is none of that, the ease of this is like using a smartphone. I have absolutely no problem with the screen resolution , it looks fine to me. I can't comment on the battery life because I've yet to unplug it, I use it strictly as a stay in one place computer (plugged in all the time). Google Docs and files take a little getting used to if you never used them, but once you get used to it you'll have no problem. It was not a problem for me because I was already use them on my iPhone . You can't download outside programs because its a closed system, to me , that's a good thing because I only use it to surf the web, shop, emails and files. And because you can't download programs your not gonna pick up any viruses. If you need to edit any photos you can always download a photo app from the Play store. I've found the storage and speed for this to be just fine, it doesn't seem to slow down with numerous tabs open. You have a load of apps to download from the Google play store that should keep you happy. I don't use it to stream movies or play games so I can't comment on that, I'll streams stuff from YouTube with no problems at all. If you want a laptop to do just the basics like I do, then you can't go wrong with this for the price. To me it's way better then one of those low cost Windows PC's. I had a low end Windows PC that I bought as a extra computer for me to use when my wife is working on the expensive PC, I hated it so much I gave it away before it was a month old. Besides being intrusive and confusing, it was slow as crap. This Chromebook is like having a giant smartphone with a keyboard, (IT'S THAT EASY). The only reason I took away one star is because I think it could of used one more USB port, other then that I love it, and if you use a computer like I do, you will too.
PS. Keep in mind that this model S330 comes in different specs. My review is based on the model with the higher resolution screen (1920 x 1080) and more memory (64gb). They have a cheaper model called the S330 with less resolution and less memory.
Read more
223 people found this helpful

J.F.
1.0 out of 5 stars NOT an IPS Display
5 May 2019 - Published on Amazon.com
Style: 4GB RAM 64GBVerified Purchase
The FHD (1920x1080p) version of the Lenovo S330 definitely does NOT have an IPS display. The panel is reminiscent of what you'd see on a Windows XP era laptop. No matter what angle you choose, it looks washed out. Some colors are so undersaturated that it's hard to see gradients.

Lenovo's decision to put a non-IPS display on the S330 is baffling. It's a real shame too, because otherwise, the S330 is a very nice Chromebook for the price. The keyboard feels great, the trackpad has an amazing texture, and overall the build quality is quite good. However, without an IPS display, it's a new car with an engine from the 1970's. It'll work...but why?
Read more
178 people found this helpful

MCG
1.0 out of 5 stars Do not buy this machine, unless ...
22 April 2019 - Published on Amazon.com
Style: 4GB RAM 64GBVerified Purchase
... you receive a written promise from Lenovo quality control that they'll pay YOU for the time you'll need to spend doing their job for them. I've had this Lenovo Chromebook for just a few days, and already I've spent too much time restarting it. On the same day it arrived, it began to freeze and turn off. Repeatedly. I ran powerwash several times. Same issue.
The value proposition for this Chromebook is that you can simply open the box, and get started working, hassle-free. Value has not been delivered. If I wanted this much aggravation, I'd run one of my old Dell's with Vista.

UPDATE: 4/23. Ran powerwash two more times. Spoke with Amazon. Spoke with Lenovo. Ran complete recovery of Chrome OS. Still freezes and crashes. Just ordered a second one for arrival 4/23, and am returning this one. Perhaps this one is just a lemon. If the second machine works as it should, I'll update here. If it doesn't, I'll return it also and post a second review. Total time wasted so far: 12 hours and counting.
Read more
148 people found this helpful

Laurie
5.0 out of 5 stars Great Value for Quality Chromebook
21 March 2019 - Published on Amazon.com
Style: 4GB RAM 64GBVerified Purchase
I was nervous about ordering this Chromebook many months before arrival. It was a Christmas gift for my husband. However, it arrived as scheduled in great condition. We had been looking for an affordable Chromebook of good quality for watching videos, browsing the internet and using google documents. The battery life is awesome and the resolution is great. He's been using it since December and is very happy with it. Would recommend!
Read more
97 people found this helpful
Go to Amazon.com to see all 248 reviews 3.5 out of 5 stars
Back to top
Get to Know Us
Connect with Us
Make Money with Us
Let Us Help You
© 1996-2021, Amazon.com, Inc. or its affiliates