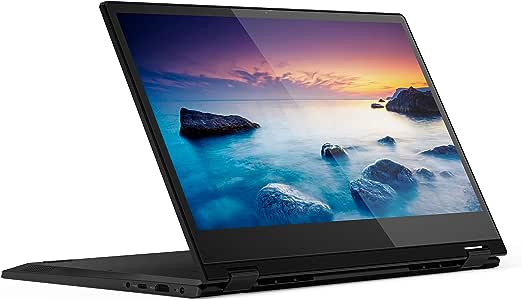 When inspiration strikes, turn to the powerful yet light Lenovo flex 14. It has an all-day battery and you can use it as a laptop, tablet, and more. For extra privacy, It has a webcam Shutter. And you can use a digital pen with it, too—giving you more ways to express yourself (pen sold separately).

Nicholas Sterling
5.0 out of 5 starsHighly versatile
19 September 2019 - Published on Amazon.com
Vine Customer Review of Free Product( What's this? )
I really like this thing. There are some things I wish were different, but for most purposes it would be great.

First a quick note about the size. I used to get larger laptops -- 15.6" or 17.3" -- but finally realized that I always used them connected to big monitors at home and at work, so the display size wasn't an issue. And on a plane/train/bus, a 14" laptop is just more manageable.

A convertible like this is great on public transit. On a plane, others can see your screen if you are using a laptop, and then there is the question of elbow space. But with this thing in tablet mode, it's much more private and compact. If drinks come, or if you need to get up to let someone else out, it's no big deal.

Tablet mode works smoothly -- the first time I twisted the display back, the hinge detected this and a popup appeared asking me if I wanted to go into tablet mode. And did I want it to do so automatically, without having to answer this? Yes and yes. The keyboard is inactivated. The display rotates automatically so that up is up. It's a tablet running Windows.

It's a bit of a bummer that the laptop doesn't come with an Active Pen -- if you're buying this laptop over another, you probably want to use a pen, but you have to buy it separately. A bit of a gouge there. I assume (but am not certain!) that the newer model, the Active Pen 2, also works with this tablet, but it feels way overpriced. I don't know whether cheaper pens work with this, or whether if they do you get the 8192 pressure levels.

The keyboard has a good feel and the backlighting (which is easily turned on and off with Fn-Space) is handy. The touchpad, which is buttonless, is large. The fingerprint reader works better than I have had on previous laptops. The display looks great and the 1920x1080 resolution is, in my opinion, the highest you could really get any value from as a laptop, and very nice as a tablet. Overall things seem well-engineered and well thought out.

The processor is an i5, but these days that means 4 cores and 8 threads -- this thing is significantly faster than my quad-core i7 system from 5ish years ago. Should be fine for almost everyone.

Oh, it says in the title that this has Intel UHD Graphics 615, but that's a mistake -- it should be 620. That's a function of the processor itself, and the BIOS verifies it as 620. Not for serious gaming, but more than enough for most other tasks. It has the HEVC video codec, which is good because video can be streamed to it using better compression techniques, saving network bandwidth, without having to decompress it in software (which is much less efficient).

This is a personal aesthetic, but I was really pleased with the color and finish. They call it Onyx Black, but it's more like a very dark gray, and it's beautiful. Matte. It is exactly what I would ask for if I could ask for any finish -- I was delighted.

Apart from the annoying lack of a pen, the two things you are most likely to dislike about this unit are the 8GB of RAM and 128GB of SSD. Honestly, that should be enough for most people, but some fraction of us really do need more. It's not impossible to upgrade, but it's not convenient. So here's my controversial takeaway on this laptop: it's great, but you should consider the version with the Ryzen 5 processor -- it has 12GB of RAM, a 256GB SSD, and comes with an Active Pen. And with all of that, it's cheaper (as I write this). AMD's new Ryzen processors appear to be quite good, so you're not giving up anything there. And to top it all off, they claim longer battery life. Also remember that a 256GB SSD allows you to store *more* than twice as much, because something like 30GB of disk is needed by the OS -- you're getting something like 2.5 times the usable space. Same for the RAM -- going from 8 to 12GB is more than a 50% increase in usable memory, because Windows takes something like 2GB off the top. The screen on that model is of lower resolution, though.

One final note -- if you are interested in putting Linux on this, there is a hiccup (beyond the fact that 128GB is a little tight for a dual-booted system). Linux installers don't see the SSD, so you have to go to the BIOS to put it in AHCI mode. But when you go to do that, it warns you that the disk will be erased. WHAT? No thanks. Some sites say no, it won't really happen; others give commands to execute to do it safely. I took a stab at it and managed to get Linux installed, but then couldn't access Windows -- it couldn't see the disk in AHCI mode. I'll try again, but I wish it were easier!

Joan
3.0 out of 5 starsREFURBISHED: NOT IMPRESSED. SENDING IT BACK
14 October 2019 - Published on Amazon.com
Verified Purchase
REFURBISHED: I'm disappointed with the lack of pixel shock; I was expecting a WOW! moment, but it never came. Also the computer is slow considering it's quad core.
Read more
17 people found this helpful.

Andy
4.0 out of 5 starsHappy son, happy dad, great laptop!
4 December 2019 - Published on Amazon.com
Verified Purchase
My 13 year old saved his money for almost a year to buy this laptop. I ordered it yesterday and received it today. We did a lot of research to make sure he got one that meets the requirements for high school next year and this was perfect! I had planned on buying it for him next year, but he just couldn’t wait.
Read more
10 people found this helpful.

Haruaki Fukutani
5.0 out of 5 starsNice Laptop great price
25 December 2019 - Published on Amazon.com
Verified Purchase
After looking at several laptops to choose from I finally settled on this one. I was not looking for a 2 in 1 but now that I have it it is very hands to set it up upright when I'm using it for a cooking recipe or doing yoga. It's noce not to have the keyboard in the way and possibily spilling something on it when cooking. The combination of I5 processor with ample memory and SSD storage for the price was great. It boots up really fast and the touch screen is nice too. I am very happy with it and also was able to get the extended 3 year Lenovo factory warranty from Lenovo after I registered it.
Read more
4 people found this helpful.

Ernie
1.0 out of 5 starsDead after less than an hour of use
9 January 2020 - Published on Amazon.com
Verified Purchase
Day 1: Complete installation, install chrome, visit one website, go to sleep.

Day 2: Come home, start laptop, the keyboard lights up but the screen stays dark. Try several times with no change.

I have never spent over $500 on a product that literally did not last one day. Unacceptably terrible. Googling "lenovo ideapad 14 wont start" shows it to be a common problem.
Read more
5 people found this helpful.
Go to Amazon.com to see all 57 reviews 3.9 out of 5 stars
Free & fast delivery, movies and more with Amazon Prime
Prime members enjoy free & fast delivery, exclusive access to movies, TV shows, games, and more.
> Get started
Back to top
Get to Know Us
Connect with Us
Make Money with Us
Let Us Help You
© 1996-2020, Amazon.com, Inc. or its affiliates