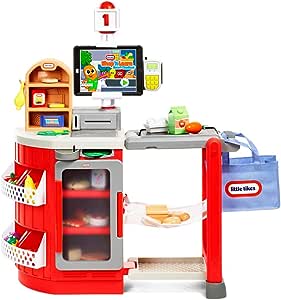 by Little Tikes
4.6 out of 5 stars 281 ratings
International product from outside Singapore

Little Tikes Shop 'n Learn Smart Checkout lets kids feel like mom and dad with a real interactive conveyor belt and scanner that reads groceries that they buy! Perfect for multiple kids to play and promotes imaginative play and helps with social skills.

Kim
1.0 out of 5 starsFrom someone who didn’t get it for free..
12 October 2018 - Published on Amazon.com
Verified Purchase
It is a cute toy, I’ll give you that. However, no way is it worth $169. I’ll buy anything ( I have a bounce house in my basement..seriously, I’ll buy anything) that occupies my kids (I have 5 that range in age from almost 2 to 22) and I’ve beeen buying toys for awhile. I have no idea what the profit margin is on this, maybe that’s the reason for the high cost, but you supply your own iPad and download an app..the rest is a jazzed up kitchen/shopping toy. The light on our “shop and learn” doesn’t light up and the belt that moves the toys to the bag works on/off. The keypad for the credit card does nothing for us, either it is meant to be just decorative or ours is defective. By the second day, my kiddos managed to get some of the coins and bills stuck together in the slot. We can see it but can’t undo what they accomplished. Day 2 with it and they scanned a few things and moved along. I’m not sure who they have reviewing items but the reality is the only thing that would make this toy 5 star would be keeping the cash in my pocket. Again, cute toy but in the overall picture it is overpriced by about 50 bucks. Maybe it will come down..that’s just my opinion.
Read more
168 people found this helpful.

KATHRYN
4.0 out of 5 starsGreat toy for young and old!
26 July 2018 - Published on Amazon.com
Verified Purchase
This is a really fun, cute toy. I tend to shy away from plastic and battery toys, but this seemed to offer so much I couldn’t resist, (and much more space friendly than other grocery store toys); my daughter (17 mo) loves it. This would be a great, educational and social toy for 18mo and carry all throughout early childhood. The app is easy to connect and really worth using (even if you’re like.... “we’re tech free!”). The games are simple and educational without being cheesy or overstimulating. The play food is simple and representative of what they actually are for the most part (ex/ no smiley faces on the apples, haha). The only reason for 4/5 stars is because our checkout light doesn’t light up! Sad! Would love to see additional healthy grocery items added as an add-on item!
Read more
15 people found this helpful.

DynomiteWins
4.0 out of 5 starsA ton of fun
7 September 2018 - Published on Amazon.com
Vine Customer Review of Free Product( What's this? )
Really cute grocery store playset that doesn't take up a whole lot of room, and was very easy to set up. Went from box to playtime in about 20 minutes, so that was great because the kids were very excited about it. It does need batteries for the light to light up and for the conveyor belt to move, and to sync with the app, but it was only 4 AA batteries, which is fewer than some of my kid's much smaller toys.

I have a 1 year old who loves to play with this because he can easily scan the fruit, hear a beep, and set it on the conveyor belt and watch it roll off the edge (it's supposed to roll into a bag, but our bag didn't fit on the hanging edge as pictured in the promotional photo - we actually got a different bag which just hangs on one hook and the handles don't span both bag hooks, but it wasn't too big of a deal. You can see my photo to see how our bag hangs.) My one year old didn't need the app and was content to play with it just as-is and since he is a toddler of destruction, watching the fruit roll off the edge and onto the floor was very appealing to him. You can also set the end flap up to prevent stuff falling off, but he quickly decided that wasn't the way he wanted to play.

What I didn't expect was that my 5 year old REALLY got into this toy once the app was involved. We downloaded the app onto a phone and set it in the clip on the register screen (the register screen in the Amazon photo is of a really big tablet with the app on it - that's not really what the "screen" looks like without a tablet, the print is less fun looking but no big deal. Again, you can look at my photo to see what the checkout screen looks like with a phone clipped into the tablet holder - it's sturdy and we weren't worried the phone would fall out but certainly not as sleek as when a full sized tablet is clipped in.) There are several different checkout themed games on the app and my 5 year old requests to play them all the time - he doesn't otherwise get a lot of game time on a phone, but since this spurs him into solitary play of a physical game, we're sort of OK with it. His favorite is having to find the right food groups to scan before the buzzer goes off.

I do wish there were more foods you could buy to play with - I was able to find other grocery toys by the same company that interact with this, but I just wanted to buy more fruits and veg. There's also junk food in the set, which is funny because our grocery store doesn't put junk food at the check out (and I avoid that delicious aisle when I'm with my kids or dieting haha) so my son had no idea what some of the junk food was and I had to explain candy bar, pack of gum, and a couple others to him. Since I'm trying to avoid having my kids deal with the same junk food habit I'm trying to quit, it would be nice if I could stock the checkout with an even bigger assortment of healthy foods and skip those other treats for play.

CC1980
4.0 out of 5 starsCoveyor Belt Broken
25 December 2018 - Published on Amazon.com
Verified Purchase
AMENDED REVIEW-
Upgrading my review to 4 stars because we think we’ve solved the conveyor belt issue. The tall part of the toy rotates to allow the toy to fold for storage. We folded it up to move it and when we unfolded it we believe that we more fully rotated the tall “checkout display” piece. When we did that, the conveyor began to work properly. When we rotated it less fully, the conveyor stopped working reliably. So we believe that turning the checkout display fully may be the key to the electronics working properly.

I’m not giving this toy 5 stars because that fix was really annoying to figure out and there was absolutely no trouble shooting help from Little Tikes on this- hopefully just because the toy is so new to market. Anyway- now that it works properly my kids (and even their older cousins) are really enjoying the toy! With or without the iPad app in use- they seem to love playing grocery store.

I hope this helps! I’m leaving my original review below I’m case someone else has the same initial issue.

ORIGINAL REVIEW- Just put this together for Christmas for our son and the conveyor belt doesn’t work! SO disappointed since that was a major reason for choosing this item. I hope we can get a replacement and that it will work- I’ll try to remember to update the review when and if we can.
Read more
9 people found this helpful.
Go to Amazon.com to see all 175 reviews 4.5 out of 5 stars
Free & fast delivery, movies and more with Amazon Prime
Prime members enjoy free & fast delivery, exclusive access to movies, TV shows, games, and more.
> Get started
Back to top
Get to Know Us
Connect with Us
Make Money with Us
Let Us Help You
© 1996-2020, Amazon.com, Inc. or its affiliates