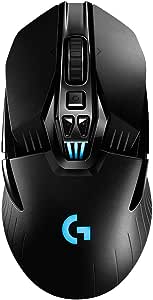 Ron M.
1.0 out of 5 stars Double clicks after 9 months, Logitech support giving me the runaround
16 August 2020 - Published on Amazon.com
Style: Mouse OnlyVerified Purchase
As many other reviewers pointed out, this mouse uses very poor quality switches. It's now double clicking for me after around 9 months. I contacted support, but they are giving the runaround... They've asked me to capture videos showing that this mouse double clicks!! Whoa, are you saying I'm lying about your defective product?

Why all the trouble Logitech? Don't you read people's complaints online? Don't you already know you used bad quality switches, and now everyone is complaining?
This is not what I have come to expect from you!!

One reason I went for this mouse (even though I was aware of the poor-quality switch issues) was Logitech's great support in the past. I've been a Logitech customer since 2013. My first ever product was MK 710 and when the mouse in that bundle started double-clicking after 3 years, they honored the warranty and sent me a replacement very quickly. Now with this mouse, I've been going back and forth with Logitech support for 10 days.

They first started by giving me instructions on "updating the drivers, using the GHub app, trying a different computer" blah blah. When nothing solved the issue, they sent me a link to a bogus website, asking me to capture a video with my phone showing that their bogus website detects unintentional double clicks. Once I sent them the video, they responded "oh we couldn't open the video, could you upload somewhere else?" Well here it is! Enjoy the video I captured at your request!

All the trouble for what?? Just send me the damn replacement already. Given the whole work-from-home situation due to COVID, I would've expected them to support people who use various computer peripherals. Needless to say, this mouse is my daily driver at my full-time job, and it's really annoying that it's double clicking so horribly.
Read more
56 people found this helpful

Chris C.
2.0 out of 5 stars A downgrade from other models, no Middle-Mouse-Button Click, and double click issues
19 May 2020 - Published on Amazon.com
Style: Mouse OnlyVerified Purchase
I now own 3 different models of the G900 series of mice: The original G900, the G903 SE, and the G903 Lightspeed (this model being reviewed). They are apparently switched to cheaper manufacturing and parts, because there is no longer an audible or tactile feedback from pressing the Middle-Mouse-Button (MMB) present on older models and any generic $10 mice. In addition, the mouse developed a double-click issue within weeks of receiving it, while my years old G900 only started doing that recently.

Without MMB feedback, playing many games, especially strategy games, becomes extremely unreliable and uncomfortable as you are never certain if you actually pressed the MMB. In fact, it's not just the feedback, more often than not it simply isn't actually pressed, leading to lots of issues. Even worse when it is pressed, but then releases half way through something even though you are still physically pressing it. You can never tell, so much that I had to remap the controls to another button (MMB Scroll-Left), which on the mouse DOES have feedback. So while there is feedback for Scrollwheel Left/Right, as well as Up/Down, pressing on it for the MMB doesn't, which is baffling. This is even more disruptive when doing 3D work like 3D modeling, causing all sorts of headaches when the mouse just decides to mess up your models by double-clicking and releasing MMB constantly. It becomes such a hassle that any generic $10 mouse becomes more usable and productive.

And even with the feedback issues and the fact that it just doesn't respond sometimes, the older models did NOT have this issue. Both my G900 and my G900 SE do have feedback on the MMB, didn't have double-click issues immediately within weeks (conveniently after the Amazon return period), and effectively have all the same features of the G903 Lightspeed. Yes, the battery life is amazing and I have to give them kudos on that, but they are great on all the G900 series mice so it's nothing new.

TL;DR: If your games and work rely on having a functional middle mouse button, and you don't want your approximately $130 (USD) mice from becoming unusable due to double-click issues, look elsewhere.
Read more
45 people found this helpful

Lenny Marchese
4.0 out of 5 stars Great Performance And Battery Life
2 October 2019 - Published on Amazon.com
Style: Mouse OnlyVerified Purchase
I am an original G900 owner. The G900 is known for bring wired latency to the wireless form factor. However, it's battery life, while not bad, was simply tolerable in my opinion. I would need to charge it once, maybe twice, a week. The G903 Hero Lightspeed on the other hand isn't in another league, it's a whole new game. I've had this mouse for nearly a month now and haven't needed to charge it. It's incredible and this is while using the 1000 Hz poling rate whereas I used the 500 Hz poling rate on my original G900.

This mouse has two downsides. The first, and it really is subjective, is ergonomics. This could fill my hand better but as it stands, it's comfortable and ambidextrous. The second is price. There is no getting around how expensive this mouse is but I really do love it.
Read more
52 people found this helpful

Aaron
5.0 out of 5 stars Works great
7 November 2019 - Published on Amazon.com
Style: Mouse OnlyVerified Purchase
I replaced the older version of the G903 with this one because a button had become worn out. Logitech did eventually send me a replacement but I didn't want to wait. Can't comment on battery life because I use the power play charge mats, so my mouse never runs out of juice. Can't recommend power play enough - it's the best thing ever to happen to cordless mice.

The only drawback to this mouse is the pricetag. If you can afford it, you won't be disappointed.
Read more
25 people found this helpful
Go to Amazon.com to see all 274 reviews 3.4 out of 5 stars
Back to top
Get to Know Us
Connect with Us
Make Money with Us
Let Us Help You
© 1996-2021, Amazon.com, Inc. or its affiliates