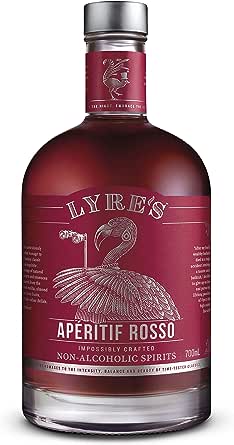 by Lyre's
3.8 out of 5 stars 14 ratings
Available from these sellers.

DC Dude
4.0 out of 5 stars A nice flavor; could be bolder (more bitter, less sweet)
28 August 2020 - Published on Amazon.com
Verified PurchaseEarly Reviewer Rewards(What's this?)
TL;DR: Good start, but needs more depth and last to key flavors; sugar dominates. Will be pleasant and drinkable for some, if chilled. If it seems pricey, save your money for something else.

My girlfriend has gotten headaches from alcohol for awhile now, so I decided to try this as an alternative which would allow us to have cocktails together. I was also hoping that it might be a nice replacement for nights where I have to work into the evening, and having an alcoholic drink might make me more tired. I also like Vermouth like Carpano Antica, liqueurs like Aperol and Campari (moreso Aperol than Campari), and drinks with a mix of sweet and bitter, like Moxie Cola (everyone should try it at least once). So I went with the Apertivo Rosso as my first foray into alcohol-free spirits, mindful of critiques for other brands that drinks can be watery on their own or provide flavors that have to be mixed into something complementary, but can't stand on their own.

I was worried about all of these things--particularly because the cost was on par with the alcoholic drinks I like--when I took the bottle out of the fridge. First impressions were of the package: well done, got here quick from Lyre's, love the branding, it just oozes the current coolness. It makes you want to try it. The cap is a little less upscale--something a little more hefty would add to its luxury feel.

Okay, taste: the taste is very pleasant, like a very mild version of a nice vermouth. It lacks the bite and deep flavor that you have with a rich vermouth like Carpano Antica, which makes it taste a little more juice-like than alcohol or mixer. That said, the flavors are there, even if they are placed a touch too subtly behind the sweetness. I can see this being particularly refreshing in the summer, but would recommend it be served chilled and neat as extra water would dilute it too much. If it were up to me, I would dial up the rich flavors even more--the bitterness, the vanillas, the earthiness--and dial down the fruit, which has echoes of cranberry cocktail, and the sweetness. As it is now, everything just feels too subtle, even if its not watery. The finish goes too quickly, so it's a bit unfulfilling. Amazon asked for a "thickness" rating, and I would say this lacks thickness--its very light in the mouth and on the palate.

So, if you have the cash and want to try it, it might be worth it. I think there's room to improve (or to have a series of more "serious flavors" that are more biting). But if you are hoping this will replace a good vermouth or apertif, you might be disappointed.

I know that some people say that these types of drinks should be added to, mixed with others (like the non-alcoholic bourbon), or otherwise not had straight. But that's not necessarily true of the type of liqueurs this seeks to emulate. That said, I will probably try other versions, from Lyre's and from others, and for those days where I want something but don't want alcohol, I can see this being a decent replacement, particularly with a dash of bitters, some citrus or even as half of a mix with something a little stronger.

For anyone wondering, my girlfriend was not a huge fan, calling the drink "like sweet fruit juice, almost saccharine, with a metallic aftertaste (like I licked a bunch of nickels)" and me "somewhat pedantic."

Public
5.0 out of 5 stars Lyre's Flavors are GREAT
5 September 2020 - Published on Amazon.com
Verified Purchase
We use a variety of different creations. All of Lyre's non-alcoholic 'alternatives' are versatile, taste great and most of them are VERY low in sugar.
Read more

Laura M
5.0 out of 5 stars Great flavor
4 October 2020 - Published on Amazon.com
Verified Purchase
Having to use nonalcohlic beverages for awhile, but may stick with this even when I'm allowed to go back to alcohol.
Read more

vel
4.0 out of 5 stars Use this in my NA Negroni
25 August 2020 - Published on Amazon.com
Verified PurchaseEarly Reviewer Rewards(What's this?)
I like that it's non alcoholic, it could have a little more flavor and it's a little expensive.
Read more