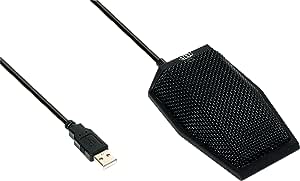 The AC-404 is designed to capture crystal clear speech intelligibility for Houses of Worship, web conferencing, court reporting, and more with easy plug-and-play USB connectivity. Three microphone capsules in a surface-mount boundary design delivers an amazing 180 degree pickup pattern with a 25' range making it ideal for podiums, conference rooms, courtrooms and connected classrooms. The low profile design is now available in white and black, and is designed to simply rest on any flat surface so it's both discrete and convenient for every day use

Brandon Zehm
5.0 out of 5 stars The best conference room microphone I've found so far
20 May 2016 - Published on Amazon.com
style: BLACKVerified Purchase
I've got to say, the clarity sensitivity of this microphone is far better than most, and the best micrpohone I've tried so far. This is, so far, the winner for our company conference rooms that hold 8-10 people.

Here's how it stacks up in my book:
-


Logitech HD Pro Webcam C920 , 1 star. Decent video but the microphone is terrible. Wouldn't recommend it to anyone!
-  Acoustic Magic Voice Tracker II , 2 stars. Great noise cancelling, but the audio is muffled and only good for 2-3 people in a room.
-  Phoenix Condor Beamforming Array Microphone , 2 stars. Audio is weak, tinny, and sounds like you're talking to someone on an old cell phone. Pretty lame for a $1000+ microphone.
-  Sound Tech CM-1000USB , 2 stars. Pretty crappy audio, wish I would have kept the box so I could return it. Lots of ambient noise pick up compared to the MXL.
-  Jabra SPEAK 510 , 2.5 stars. At just $100, this has better audio quality than the $1100 Phoenix Condor. The problem is that it only has one microphone, so compared to the MXL it sounds quiet, muffled and generally pretty bad. Still better than a few of the others listed here.
-  Blue Microphones Snowball , 2.5 stars. I'm not sure what all the hype is about. The MacBook Air's microphone was far better than the audio from this thing. Returned it.
-  ClearOne Chat 170 , 4 stars. This has pretty decent audio but compared to the MXL it sounds muffled and it chops in and out. The advantage is that since it's also the speaker it has perfect feedback prevention, meaning the person speaking through the ClearOne doesn't hear their own voice feeding back to them at all. I'd recommend this for 4-5 people in a conference room.
-  Blue Microphones Yeti USB , 4 stars. This is my second favorite compared to the MXL. Audio is pretty clear and it has decent range. The MXL still sounds better and has better full-room pick up though.
-  MXL AC-360-Z , 5 stars. This is basically four AC-404's put together into a single nice looking package optimized for Zoom Rooms. If you're using Zoom Rooms and have a room where you need to pick up speakers from any direction this is a *great* microphone package!

Let me know what you think. These were all compared by myself during company meetings. At each meeting I'd have someone at the office connect 2-3 microphones to our conference room PC and then switch between them during the meetings.
Read more
83 people found this helpful

Jester
4.0 out of 5 stars A good boundary mic for the price
17 June 2016 - Published on Amazon.com
style: BLACKVerified Purchase
Overall this is a good quality mic for the price. I compared it to the similar Soundtech CM-1000, and there are pros and cons to each. Both had better sound than my Jabra Speak 410/510 USB speaker/mic, though neither has speaker or bluetooth functions. I would also check out the Samson GoMic, which (though not a boundary mic) is good sounding, very flexible, and less expensive.

The MXL isn't really omnidirectional; possibly this is a function of the 3 capsule design? (pic attached). In any case, mine acts as a cardioid pattern mic (the slanted bit is the front), and I got good results orienting the mic this way. 90 degrees off axis was several dB down and sounded more distant, and 180 was even worse. The SoundTech CM-1000 was omni, and though it had a few dB more noise and didn't sound as good as the MXL on axis, it was better off axis. Thus, in a room with only a couple of people or for more distant pickup the MXL wins, but for a small round conference table the SoundTech does.

The SoundTech allows you to daisy chain additional mics for better pickup for larger tables or rooms; the MXL does not. However, adding a second mic increased room noise by 6dB. Though it definitely gave more uniform pickup, in my room (noisy due to old A/C system) the background noise made this setup unusable. In quieter rooms this might be a good solution, but I'd verify that it works in your space before committing to it.
Read more

Matthew Hartranft
5.0 out of 5 stars Works great since 2012 & Best class lecture mic & works with OneNote 2010
17 November 2017 - Published on Amazon.com
style: BLACKVerified Purchase
Law school Lectures have good quality audio even from third or fifth row back - the closer the better but no other mic at this price could come close to the audio quality. I tried a Sony and some cheaper knock-offs and this was the best. Also it is inconspicuous relatively as it just looks like a computer mouse.

Because it plugs directly into laptop I can use the audio lecture synchronization feature in OneNote 2010. That way I can click a hand-written note or bullet point and play the audio that was recorded at the moment I wrote the note in my OneNote program. When reviewing for exams this meant I could search a key word like "Statue of Frauds" and my OneNote would locate all notes where I wrote that down. Then I could click and replay the exact lecture audio. Dramatically reduced the amount of writing during lectures.

Audio quality is so good for the price.
Read more
4 people found this helpful
Go to Amazon.com to see all 385 reviews 4.2 out of 5 stars
Free & fast delivery, movies and more with Amazon Prime
Prime members enjoy free & fast delivery, exclusive access to movies, TV shows, games, and more.
> Get started
Back to top
Get to Know Us
Connect with Us
Make Money with Us
Let Us Help You
© 1996-2020, Amazon.com, Inc. or its affiliates