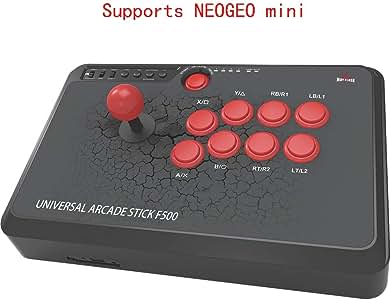 by MAYFLASH
Platform : Not Machine Specific
4.5 out of 5 stars 332 ratings
Available from these sellers.

Features: Compatible with PlayStation 4, PlayStation 3, Xbox one, Xbox 360, PC, android, Switch and NEOGEO mini. Compatible with sanwa denshi buttons and joystick that is perfect for customization to make it your very own. (Sanwa denshi buttons and joystick are not included in the packaging and you need to buy them separately). Supports the headsets to output the background music and online chat on ps4, Xbox one and Xbox 360. Supports the xinput and dinput when being used on PC -supports the turbo functions with different speed settings, the d-pad and x/y analog axis mode can be exchanged. Supports the vibration function. A sole customized wrist strap makes you feel the real vibration. (The wrist strap is not included in the packaging. You need to buy it separately) A Sony ps4 controller is required when using on a ps4 game console, and a Microsoft Xbox 360 or Xbox one controller is required when using on a Xbox 360 or Xbox one game console. The fighting stick has considerable heft and rubber feet, both of which work to hold the controller firmly in place on hard, flat surfaces. Two pieces of metal panels (metal cover and metal base) increases the fighting stick's weight for a solid, secure feel.

Rada
5.0 out of 5 starsMayFlash F500 built for moding
18 December 2016 - Published on Amazon.com
Verified Purchase
I like the feel on the joystick Tension Spring feels close to my Sanwa 2014 Silent Joystick - 2 Generation (JLF-TPRG-8AYT-SK) Tension Spring. You can even just buy the Sanwa 2 piece Octagon Restrictor Gate and swap out the MayFlash Restrictor Gate. I got mine for $3.95 from ArcadeShock. The MayFlash Joystick looks good and can change the art work to customize the look. The joystick and buttons are not cheap at all. I really like the buttons and everyone that used the stock button don't even notice. Good size nice amount of palm/risk space for the left hand. There a compartment that hides the USB cord. I mod mine out for a detachable 3ft USB cable. The MAIN THING that I didn't like was the square gate. But this was so easy to change to an Octagon gate. But this is my preference I'm sure there are gamers that use square gate.

The buttons are okay they are not bad at all for stock. I swap them out within days so I don't know how long they will last before they wear out.
Swap them out for Sanwa 30mm and installed 30MM Foam Silencers for Sanwa

The Best thing that I like about the MayFlash F500 is that you can mod out the joystick and buttons with Sanwa part.
The first thing I swap out was the joystick for a Sanwa Silent Joystick 2nd Gen (JLF-TPRG-8AYT-SK) The Sanwa comes with a one piece restrictor gate with a square gate.

I mod out the square gate with a Sanwa Octagonal restrictor gate. I got bought at arcadeshock.com.

Then my next big mod was mod out the Actuator with Kowal 1mm oversize Actuator for Sanwa JLF Series that I got at focusattack.com
I also replaced the tension for Sanwa JLF with a 2lb but I put back the one that came with the Sanwa joystick. For me the 2lb was just to stiff. I just kept on noticing how for me it took more effort and after playing for a while I notice it more and more.

Moding the F500 with Sanwa parts was easy and fun you can also change the graphic cut out for that look that your looking for.
The main thing that was not for me was the square gate but replacing that was easy and cheap.
Below is the link when removed the F500 plate to see what is inside and comparing it to the MayFlash V2

If you like to see me Compare Flash V2 Venom you can see it here [...]

Dale R.
5.0 out of 5 starsExcellent Entry Level / Casual Gaming Fight Stick!
11 January 2018 - Published on Amazon.com
Verified Purchase
I'm a casual gamer. Especially when it comes to fighting games. I suppose what frustrated me personally with fighting games on the console, and PC was that it didn't feel like the arcade. I mulled around with the thought of getting a fight stick one day--checking reviews and reading about what 0players recommended. Then I came across this gem: the Mayflash F500. This was exactly the entry-level fighting stick that I was looking for. This fight stick has got me excited in my playing fighting games again! It really does make a difference what kind of controller you use.

One of the things that piqued my interest with this particular fight stick, was that reviews were saying it was designed with the casual gamer in mind. That sounded perfect for me. I'm a casual gamer, and I needed something that would get me started—and it wouldn't break my wallet. I'm happy to report that the Mayflash F500 is remarkable for my fighting game needs. It has great weight to it, thanks to a solid metal bottom. It also has a nice plexiglass protective cover (not shown on the Amazon webpage), for smooth movement of my hand/fingers over the top.

One of the attractive features of the Mayflash F500 has been it's functionality across multiple platforms too. For me at least, seeing a fight stick work on PS3, PS4, X360, XB1, Android, and PC is phenomenal! I'm mainly a PS4 gamer, and it's been working great on that console with Street Fighter V (SFV). One caveat though, a console controller needs to be plugged into a front USB port of the Mayflash F500--in order for the fight stick to work on the corresponding console. This isn't really a big deal for me personally, because I have a 6-foot USB cable, and I simply lay my PS4 controller out is the way... so it doesn't interfere with my space. It would've been nice that the port was placed in the back of the unit though, instead of the front, because I find it does get slightly in my way when I have it in my lap.

I've played with the Mayflash F500 with the stock buttons and joystick for about a week, to see if I liked them. While the buttons are responsive and work well, they can be quite loud when button mashing. Overall this isn't even a major problem, but your selections will be quite audible to you and those around you.

The joystick that comes with the Mayflash F500 is okay. This joystick isn't the most responsive one I've used, and I've found that it has a lot of play in-between the micro-switches... and wiggle room (as I like to call it). Up/Down/Left/Right definitely takes some some effort to move out of the dead zone. I've found that the distance from the dead zone to contact with the micro-switches caused delays in my fighting movements in SFV (for example); I would miss some jumps or special moves a lot. The joystick is mounted to a 4-way square gate on it's bottom, and thankfully the Mayflash F500 comes with an a replacement 8-way octagonal gate. I immediately replaced the 4-way gate with the 8-way gate in order to get a better locked-in range.

The amazing thing about this fighting stick so far has been the choice for me to mod it. After a week of playing with the fight stick with stock inputs, I was able to get an idea of what I wanted--and what I was better looking for. As a teenager growing up the 1980's I frequented public arcades whenever I could. I got used to those style of arcade machines, and their joystick movements (e.g. tension, range, feel). Thankfully there are a multitude of replacement parts available online, and I've been able to mod my Mayflash to my liking now... and I'm absolutely loving it.

I want to say that the Mayflash F500 is a fine fighting stick all on it's own. How it's built, designed, and plays is excellent. This is certainly a decent fight stick. I love it's weight, it's mod-ability, and it's overall size and feel. It's clean, neat, and compact--it doesn't take up a lot of space on my desk or lap. For anyone starting out looking for an entry-level fight stick like me, I encourage you to try the Mayflash F500 out. I think you'll be pleased with it, until you decide to double-down on a more expensive stick down the road. I know that I'm glad that I got this, and I'll be passing it down to my daughter when I finally make the jump to a $300 fight stick down the road.

For those wondering what I replaced the stock buttons and joystick with, I went with Sanwa Denshi. Although Amazon has some great replacement parts available here on it's website, you'll need to go to places like Arcade Shock or Focus Attack to find more variety and choices. I was able to change my ball top on the joystick with a bat top style. I was also able to find colored buttons, and I mimicked the color scheme of the PS4 controller inputs. I was also able to find sound dampeners that I could stick in each button, to quiet down my intense button mashing. The choices for customizing are endless. Have fun, and happy gaming! ツ
Read more
33 people found this helpful.
Go to Amazon.com to see all 242 reviews 4.4 out of 5 stars