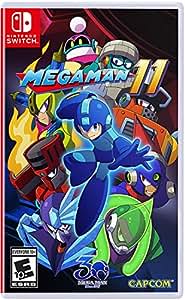 by Capcom USA
Platform : Nintendo Switch
Currently unavailable.
We don't know when or if this item will be back in stock.

Mega man returns! the newest entry in this iconic series blends classic, challenging 2D platforming action with a fresh new visual style. The new double Gear system boosts Mega Man's speed and power for a new twist to the satisfying gameplay the series is known for. Long-await sequel evil genius Dr. Wily is back to his mischievous ways and invest in an ambitious idea from his time at robot university. The benevolent Dr. Light decides to upgrade Mega man with wily's powerful prototype known as the double Gear system, expanding his abilities for the greatest fight yet for everlasting peace. A visual leap taking a leap forward in visual presentation, the new game features a 2.5D design direction which blends beautiful, hand-drawn environments with lively characters. New to the classic series, Mega man now also takes on characteristics of defeated robot masters when wielding their weapons. Powerful new gameplay Options the double Gear system adds a unique new twist on the satisfying platforming action, offering Options to enhance Mega Man's speed and power on the fly. For vets and first-timers a wealth of difficulty Options.

CVT
5.0 out of 5 starsAll the classic Mega Man with a little new.
3 October 2018 - Published on Amazon.com
Verified Purchase
I'm starting to feel like a baby boomer where gaming is concerned. (You know, hating change an such.) Contrary to probably what will be the popular opinion, I feel Mega Man 11 has changed a pretty good bit from the normal formula and I'm actually liking it.

I feel like there is less cheap death compared to previous installments, but it makes itself more of an endurance match to get to the boss. I really enjoy each stage having its own thought out mini boss also and the fact that you don't spawn right in front of the door when you die. You instead have to work your way back without losing too much health so you can make it through the fight while still making a couple errors.

The gear system I thought was stupid at first, but it started to grow on me. You start finding little parts of stages where the speed gear makes life a lot easier. The "shooty" gear as I call it is probably useful, but I still forget it exists most of the time.

As for the standard stuff:
I feel its nice because based on the upgrades you buy you can make the game as hard or mind numbingly easy as you want. Which I don't really think is a bad thing at all. Making a game accessible to new players is done by doing just that. Making it accessible to a range of skills of platforming not adding a battle royal to Mega Man just cause that's what the kids are doing at the moment. (Man... Still sounding old and grumpy...)

The only badish thing:
You waited to long and lost good composers Capcom. The music just doesn't have that same "omg lets shoot some stuffs and jump over holes" feeling. But in their defense it's like comparing 11 and 2's soundtracks is like comparing Kid Rock to Mozart. I'm nit picking at this point. I'm just gonna go away now. Good day

Conor Metz
4.0 out of 5 starsGreat Mega Man game with some issues
4 October 2018 - Published on Amazon.com
Verified Purchase
I've been a fan of the Mega Man franchise a long time and while I think the series has definitely had its ups and downs (much more with the X series), the core series has usually been pretty great. I think the only two Mega Mans I didn't really like were 7 and 10, the latter of which kinda brings me to my thoughts on this game.

The Mega Man series has always been known for its difficulty, but as someone who has mixed feelings on difficult games, one of the things I always loved about the series is most of the games (except a few) were fair when it came to being difficult. This meant either more checkpoints as the series evolved, or short levels like the older titles. This gave the player the opportunity to learn the levels without punishing them and the bosses waiting at the end were usually pretty quick and easy to beat provided you had the right weapon to exploit their weakness.

When it came to Mega Man 9, the one most people considered the hardest, I didn't really think it was that bad, the difficultly never felt punishing and it was usually fair in how many power-ups you were given and how the levels got steadily harder as you went along. Then came 10 which I thought was just WAY too hard and not in a good way. Where 9 felt balanced, 10 felt cheap and I found myself dying over and over for the stupidest reasons before finally just giving up on the game.

Now we come to 11 where the series has had its first major overhaul with the addition of the gear mechanics. This takes some adjusting too as you'll quickly find you NEED to use the speed gear to get past many obstacles. However, this leads to one problem I have with the game which is that at times, it feels more akin to a puzzle platformer than a standard Mega Man game.

Rather than just continuing to run, jump, and shoot, I sometimes found myself having to stop and figure out how to proceed forward, and other times being forced to move forward without having this chance and just dying over and over while I figure it out. I am actually thankful there are at least difficulty options because after an hour on the first level playing on Normal, I finally had to lower the difficulty to Casual. The reason for this is my next problem which is the LENGTH of levels. They just feel too long under the standard Mega Man rules. A single checkpoint in the middle is not enough when the levels are this long and complex. Thankfully Casual gives you more lives and checkpoints, but considering I beat the other games without this option, I felt a little sad to have to resort to this.

On to the good, I really love the art style of this game which feels like a cartoon come to life, something which they were moving closer to on 8 and then backtracked from on 9 and 10. The design of everything is just spot on and I really love the creativity on display as well as the fact that this feels like it has an actual story (something the X games aimed for but the core series usually lacked). The controls are smooth and responsive as they should be in any good Mega Man game and this helps to offset the difficulty of some levels (as does the store which has a lot of helpful items to allow the game to be as hard or easy as you choose to make it).

All in all, I really like this game, but its not perfect. For some odd reason the first level seems to be one of the hardest in the game and the lack of checkpoints on normal considering the length of the levels feels like an oversight (if you want less checkpoints, that should be what Hard difficulty is for). I'd say if Casual was actually the Normal setting, a lot of my issues would be invalid, however perhaps they're invalid anyway since you can choose how hard you want to make this game. If I'm just ignoring the difficulty settings though and focusing on what's there, this is definitely one of the best Mega Man games, possibly just below 2, 3, and 9. Yes some parts of the levels are cheap, but the game gives you so many options to lessen the frustration, I can't fault it too much.
Read more
33 people found this helpful.

Jonathon Turner
5.0 out of 5 starsLives up to very high expectations.
3 October 2018 - Published on Amazon.com
Verified Purchase
Despite being a popular favorite with videogamers, Megaman hasn't had a new entry in years... until now. MEGA MAN 11 is a glorious love letter to past MM adventures. To a fault, it doesn't do anything majorly revolutionary, but considering the variable output of its sequels, it's at least gratifying to know that this turned out very well and easily better than the disappointing MIGHTY NO. 9. The game introduces a new "Double Gear" system, which provides opportunities for powering up or slowing down. Both of these are great additions. The gameplay remains as fun and glorious as it did for previous Mega Man entries. The graphic style is rendered in a clean, gorgeous hand-drawn style that feels very much at home with what you'd expect from classic MEGA MAN. There are cutscenes in the game, thankfully skippable, and yes, there's voice acting. Thankfully, the voice acting is for the most part pretty good and easily better than that of MEGA MAN 8 (Dr. Light's embarrassingly awful Elmer Fudd syndrome is thankfully gone in this one). The music has yet to catch me as truly memorable. It's passable stuff, although not quite as good as in previous MEGA MAN entries. All told, though, Capcom has done a fine job of producing a game that lives up to its predecessor, and it plays exceedingly smooth on Nintendo Switch with no noticeable hiccups. Fans of classic platforming, rejoice.
Read more
16 people found this helpful.

Steven Litz
5.0 out of 5 starsMega Man 11 is Brilliant!
7 October 2018 - Published on Amazon.com
Verified Purchase
“The Blue Bomber is Back!”. I’ve been playing MM games since I was a child. I grew up in the 80’s and had most of the NES and SNES MM games. This one is easily in my top 3 favorites in the series! The game is a ton of fun, you can upgrade MM, buy items, and the graphics are gorgeous! I’m so hapoy they finally made a modern looking game. I love the older 8-bit visuals, but an growing a bit tired of them. This is a must buy!
Read more
13 people found this helpful.
Go to Amazon.com to see all 210 reviews 4.5 out of 5 stars