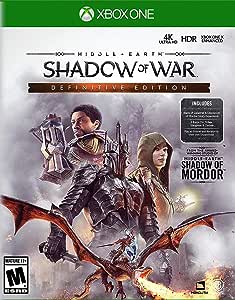 by WB Games
Platform : Xbox One
Available from these sellers.

Play the Definitive Edition of Middle-earth: Shadow of War!Immerse yourself in the epic war for Middle-earth as you confront the Dark Lord Sauron and his Ringwraiths. Forge a Ring of Power to dominate your enemies and command your followers as you experience a unique, personal story brought to life by the award-winning Nemesis System.The Definitive Edition includes all DLC:Slaughter Tribe Nemesis ExpansionOutlaw Tribe Nemesis ExpansionBlade of Galadriel Story ExpansionDesolation of Mordor Story ExpansionNemesis Expansions include a new Orc Tribe featuring new enemies, followers, missions, abilities, weapons, Fortress and wilderness updates, and a Legendary Gear Set.Story Expansions introduce a new campaign, playable character & abilities, side missions, enemies, allies & more.Experience an epic open-world brought to life by the award-winning Nemesis System. Forge a new Ring of Power, conquer Fortresses in massive battles and dominate Mordor with your personal orc army in Middle-earth: Shadow of War.

Austin Shalit
5.0 out of 5 starsGame + All DLC! Less than HALF the price of the Xbox store!
31 May 2019 - Published on Amazon.com
Platform For Display: Xbox OneVerified Purchase
Got the game with ALL DLC for less than half the price as it is in the Microsoft Store on Xbox. The game itself is GREAT FUN which is a pleasant surprise in this era of content starved, micro-transaction ridden, lame gameplay with no consideration of feel of gameplay, hot garbage games that is flooding the markets ever since the current generation of consoles took over. I highly recommend it, and at this great price!
Read more
8 people found this helpful.

Chris miller
1.0 out of 5 starsDid not receive the codes for my definitive edition With this purchase. W
22 March 2019 - Published on Amazon.com
Platform For Display: Xbox OneVerified Purchase
I played the game beat it and was looking to play the expansions since the game includes them with the definitive edition and I couldn't play them because I didnt own them which was weird because I own the definitive edition of the game which includes them i love this game and love the company but I'm very dissatisfied that i didnt receive all content like i was supposed to otherwise I'd rate 5/5
Read more
7 people found this helpful.

calc
5.0 out of 5 starsAwesome Game!
30 August 2019 - Published on Amazon.com
Platform For Display: Xbox OneVerified Purchase
I played some of Shadow of Mordor, which is the precursor to this new game. The new game, shadows of war, is MUCH improved over Shadow of Mordor. I put the game on easy difficulty, but it is still plenty challenging. I don't recommend playing at medium or difficult settings.

Shadow of Mordor (the precursor) was too challenging. Spent too much time running away from fights with captains.
Read more
3 people found this helpful.

Terry C
2.0 out of 5 starsDictator Software
20 August 2019 - Published on Amazon.com
Platform For Display: Xbox OneVerified Purchase
The software takes control (it an open world game) and dictates you will play the way I'm programmed or not at all. I went into one camp to rid the "LEADER" well about every 5 steps a "NEW LEADER" popped up along with his band/gang of imps. The game would take control of my character, he would stop defending himself, bow down on one knee and wait for the Imp to deal a Death Blow. Then the game would have about a two minute scene of this Imp dancing around gaily of how he kill my character. Needless to say this game did not last long in my system. I spent more time watching the software doing its animations than I did playing the game. Sure am glad I waited to pay a decent price, around $16.50.
Read more
2 people found this helpful.

Isiah
4.0 out of 5 starsWatch which version you get
23 February 2020 - Published on Amazon.com
Platform For Display: Xbox OneVerified Purchase
I have purchased this exact game 2x from Amazon, the 1st was bought LIKE NEW so I took the loss with a grain of salt that the DLC was not included so I dropped another order because I bought it NEW, the game came with 2x discs and says on the discs themselves Definitive Edition and on the case 2xDISC so be aware of what you order and buy as my so called LIKE NEW was simply the original Shadow of War game disc stuffed inside a Definitive Edition case.
Read more
2 people found this helpful.
Go to Amazon.com to see all 32 reviews 3.8 out of 5 stars
Free & fast delivery, movies and more with Amazon Prime
Prime members enjoy free & fast delivery, exclusive access to movies, TV shows, games, and more.
> Get started
Back to top
Get to Know Us
Connect with Us
Make Money with Us
Let Us Help You
© 1996-2020, Amazon.com, Inc. or its affiliates