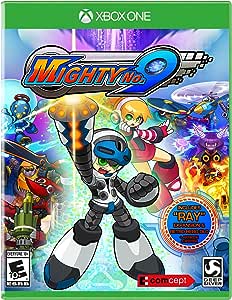 Mighty No. 9 is a Japanese 2D Side-scrolling Action game that takes the best elements from the 8 and 16-bit classics and transforms them with modern tech, fresh mechanics, and fan input into something amazing, Led by a veteran team with decades of experience, Mighty No. 9 promises to be an evolution in the well-known genre.

The Bryces
3.0 out of 5 starsHas potential, but....
10 September 2017 - Published on Amazon.com
Platform For Display: Xbox OneEdition: StandardVerified Purchase
The wife got this for me for my birthday and I so wanted to completely enjoy it. But I don't. I'm no hard core gamer by any means and while scrollers aren't my best game type, I usually do pretty well. Mighty No. 9 is effectively a Mega Man remix, so it has so much potential. The levels are fun and can be pretty challenging, and then there's the bosses. Either you're nerfed or the bosses are over-buffed. Making it through a level just to be humiliated by the boss (even on the easy setting) is miserable.

*Update* I have been playing this for a while now, and once you can manage to defeat hour first boss with the basic weapon, it becomes a bit easier. Even so, more than a few levels I've had to replay because I've run out of lives (even though I've got that option maxed in the settings).

j
4.0 out of 5 starsWould like to see more made!
22 February 2017 - Published on Amazon.com
Platform For Display: Xbox OneEdition: StandardVerified Purchase
If you're looking for a mega man game, this will do, difinitely at the price I had paid. It has all the feels and some similar weapons. My only complaint was some parts are far to difficult and others are way to easy. It takes a little fun out of it making it a chore. Honestly though, this is a good buy for anyone at the price, for memories or for almost any game collection.
Read more
3 people found this helpful.

Juanjo
4.0 out of 5 starsGood game, controversy aside.
10 April 2020 - Published on Amazon.com
Platform For Display: Xbox OneEdition: StandardVerified Purchase
This is a MegaMan style game, if you like that genre I can assure you will enjoy this hidden gem. I got it for Xbox and PS4 and it plays smoothly on both platforms.

Yes I know back in the day there was a lot of controversy around this game because of the people behind it overselling it, getting lots of money from a raise funding platform and in the end, the game was a "meh" in comparison to all the money they raised, people said that money did not translate directly into the quality of the game, for that amount the buyers expected a better game. It was very sketchy how the developers handled it.

BUT, if you are open minded enough to see this game for what it actually is and leave behind all the controversy, then you will enjoy it a lot. After all, it's just an indie game in the style of Mega Man, and for the price that is selling today, yes I recommend it.
Read more

Joshua G.
4.0 out of 5 starsI completely enjoyed this game
27 June 2016 - Published on Amazon.com
Platform For Display: Xbox OneEdition: StandardVerified Purchase
As a person who did not back or follow this game through production, yet adores Megaman (especially the entirety of the X and Zero series), I completely enjoyed this game. I have read and understand the issues it has faced and know that Inafune and his team have mishandled a lot of it, which understandably constitutes a plethora of hate. However, as someone who just played and finished the game before seeing all the hate and controversy , I had a blast playing it
Read more
8 people found this helpful.

Jason Sum
5.0 out of 5 starsIf originally sold for $15.00 it would've never got the hate it gained 8/10
31 October 2016 - Published on Amazon.com
Platform For Display: Xbox OneEdition: StandardVerified Purchase
Mighty No .9 is a prime example why gamers need to stop being fan boys first and consumers last

Stop financing any of these projects (Example: 7 Days to Die, Mighty No. 9, Shattered: Tale of the Forgotten King, ARK: Survival Evolved, Shenmue 3, Friday the 13th The Game, Toe Jam and Earl among so many of these pipe dreams

Might No. 9 is actually a super impressive game for what it is
It's a Mega Man knock-off

Story: It's a blatant rip-off of Mega Man the story is silly and means nothing

Controls: Are solid the game is extremely easy to pick up and play

Graphics: work it's a retro 2-D homage to the original Mega Man series
The game is beautiful it look like a living breathing cartoon it also runs smooth

Sound: is also a major throw-back it has a very 1980's sound to it which i can appreciate

The difficulty I'm sure also made plenty of people into angry video game nerds
It's hard but, it's a Mega Man clone it's going to be tough and relentless
As hard as it is
its also balanced enough where you'll try again and again
You just have to figure stuff out much like during the 1980's
Even gamers my age have gotten a bit lazy
During the 8bit and 16bit era games were not for kids they were hard and didn't hold your hand

Why so angry:
If a game is going to be so awesome then a publisher will buy it and finance it
It shouldn't be up to the consumer to finance the game
Crowdfunding is a wonderful thing But, not in the gaming industry there is way too much sleazy and underhand things going on at Big Name Studios and Publisher why would you trust some smock in his basement?
Not sure why the internet almost melted over this game once it was released
I liked the idea of this game i would never help finance it......
If it was sold out the gate originally for $15.00 I'm sure it would've got a luke warm reaction But, nothing like this
Gamers just don't like to admit when they are conned
Might No .9 was a con but, it's not the worst con
It wasn't a time share meeting or a amway con it was on a crowdfunding site each one of you pitching a fit sought out this investment
and invested in it
You gambled and lost
Hopefully people will learn from this But, i doubt it
The story behind this game is more interesting then the game itself But, it's a love letter to the 1980's and it's a nice letter you'll want to read every now and then 8/10
Read more
4 people found this helpful.
Go to Amazon.com to see all 47 reviews 3.5 out of 5 stars
Free & fast delivery, movies and more with Amazon Prime
Prime members enjoy free & fast delivery, exclusive access to movies, TV shows, games, and more.
> Get started
Back to top
Get to Know Us
Connect with Us
Make Money with Us
Let Us Help You
© 1996-2020, Amazon.com, Inc. or its affiliates