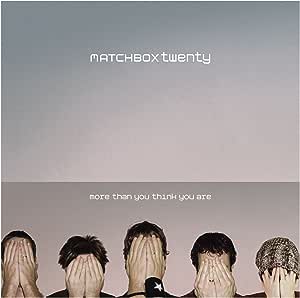 Share
In stock.
International product from outside Singapore Learn More.

Secure transaction
Your transaction is secure
We work hard to protect your security and privacy. Our payment security system encrypts your information during transmission. We don’t share your credit card details with third-party sellers and we don’t sell your information to others. Find out more
Details
Ships from
Amazon US
Sold by
Amazon US

More Than You Think You Are [Audio CD] Matchbox Twenty

Melisma/Atlantic recording artist Matchbox Twenty is ready to rock with their eagerly anticipated third album, MORE THAN YOU THINK YOU ARE. Produced by matchbox twenty's longtime studio collaborator Matt Serletic, the new album - which features the hit single, "Disease" - was recorded at Bearsville Studios in Woodstock, New York and at The Hit Factory in New York City. "This is probably the most rockin' record we've ever done," says the band's lead singer/songwriter Rob Thomas, "Because we've been working with Greg Collins, who's engineered bands like System of a Down and Red Hot Chili Peppers, and mixer Jim Scott, who's worked with people like Wilco and Tom Petty & the Heartbreakers. But at the same time, there's a warmness to the record, a real organic quality that I just love."

eeoyrefan
5.0 out of 5 stars It just keeps getting better!
13 September 2003 - Published on Amazon.com
Verified Purchase
This brilliant offering not only will undoubtedly secure this band?s place in the halls with the "bands of legend", but also gives hope that the next generation of music will be comprised of more than one-CD or one-song wonders that fizzle brightly but die quickly like Fourth of July sparklers.
Matchbox Twenty has distinguished themselves magnificently on more than you think you are, thankfully leaving behind all vestiges of their initial sound that sometimes made them seem like little more than pleasant "Black Crowes" knockoffs. Rob Thomas' amazingly versatile vocal skills are beautifully showcased here, and yet there is still SO much more to the show! With all the remarkable tunes on this CD it is hard to settle on a favorite, but rest assured there are plenty more great songs than just that small subset being bludgeoned by copious play on the airways. Especially notable are the funky, retro "You're So Real" (shades of the Doors' You Make Me Real?), as well as the delightfully bohemian hidden track--think Stray Cats, or Queen (it's NOT lame, guys!!). And certainly there are not enough superlatives to describe the breathtaking "Downfall". Each and every song on the CD is fresh and unique, full of lyrics that weave compelling images ("Slow dancin on the boulevard/In the quiet mornings while the city's still dark/Sleepwalkin through the summer rain/In the tired spaces you could hear her name" or "All the one way rides/and those sweet beginnings/Passing on the left hand side/With a sideways smile"), and clever melodies that prove unequivocally this band can play anything and play it well.
The bottom line? Don't miss this CD; it is one that will get in your heart and your head, and you?ll be infinitely glad it's there!
Read more
2 people found this helpful

Jeffrey E.
2.0 out of 5 stars I can't believe I am doing this.....
3 December 2002 - Published on Amazon.com
Verified Purchase
I can't believe I am actually giving a 2 star review to anything associated with Rob Thomas. I am pretty disapointed with this CD overall. I like the first single "Disease" and there are a couple of others that aren't too bad like "Unwell". Overall it seems like Rob isn't in control of the writing like he usually is. I think he is trying to not stand out so much as the focal point of the group on this CD. There is a noticable difference in their sound to the point where some of the songs don't even sound like them at all... I am for evolution within a band but this is a bit too different too soon. "Mad Season" was in my opinion the best of the three so far. However, much of that opinion is due to the overplay of the first CD. I only hope that this is not the beginning of the end for them as there isn't really any standout hits on this CD like the last one had... or the first one for that matter.
Read more
One person found this helpful

Susan T.
5.0 out of 5 stars Absolutely Outstanding Music - Must-Have Quality
18 December 2002 - Published on Amazon.com
Verified Purchase
The music on this album is highly superior quality music. It represents diverse styles and feels, and Matchbox Twenty successfully writes and performs each song with depth, intensity, and just perfectly. Rob Thomas uses his voice in so many different ways, yet always strong, clear, and just a joy to listen to. The lyrics beautifully express the spectrum from sensuality to sexuality to pensiveness to straightahead fun. And Rob and company blend the music and lyrics and the always dynamic performance to offer a fantastic collection. From the fun of "Disease" and "Feel" to the poeticism of "The Difference" and "Bright Lights", the honesty of this music shines through in many facets.
This is one of those albums you just never get tired of listening to. You keep hearing more and more in each song. It's very difficult to find a favorite. Rob and MB20 once again have graciously given us a treasure!!
Read more
One person found this helpful

Michael
5.0 out of 5 stars One of their better albums!
20 October 2013 - Published on Amazon.com
Verified Purchase
Listening to it right now, my first impression of it is very good! Although it will never surpass there first album, which I thought was their greatest album to date, it is definitely up there with Mad Season! Another great track for all you Matchbox 20 lovers! Would definitely recommend, although it seems to have a different type of musical tone (more mellow) then the other albums, still sounds great!

Steven Haarala
5.0 out of 5 stars "Feeling much better, thanks..."
15 July 2006 - Published on Amazon.com
Verified Purchase
The thing is, I was never a fan of Matchbox Twenty, but through the years I became attached to 2 of their songs: "Back To Good" & "Unwell". So I bought their first album to get "Back To Good", and I liked it pretty much, so then I bought this one to get "Unwell", and I like it even better. The first one was sort of Southern-folk-country rock, which was OK, but this one is a mixture of harder rock and good old commercial pop, with all kinds of variety thrown in for good measure. Just as an example, the bridge in "You're So Real" sounds so much like The Beatles, it's scary. The lead guitar work is amazing all through the CD. Kyle Cook is a vastly talented rock guitarist, but I imagine he could play anything he wanted, and I'm sure he is one of the main reasons for MB20's success. Of course, Rob Thomas is the big enchilada. He has terrific songwriting skills, a potent but expressive voice, and all the charisma necessary to be a frontman, with more to spare. Some of the lyrics make me think he should be a psychiatrist. He seems to understand my obsessions ("Disease"), my optimistic rationalizing ("Unwell), my disappointments ("Hand Me Down"). and my acceptance of inner turmoil ("Soul"). And by the way: DO NOT miss the "hidden" track that follows the official 12th track, "The Difference". It is hot and mean musically, and lyrically a sublime depiction of dark defiance in the face of despair.
Read more
6 people found this helpful
Go to Amazon.com to see all 366 reviews 4.4 out of 5 stars
Back to top
Get to Know Us
Connect with Us
Make Money with Us
Let Us Help You
© 1996-2021, Amazon.com, Inc. or its affiliates