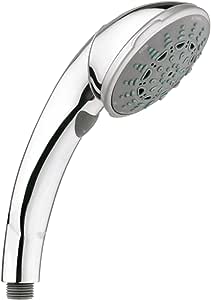 by GROHE
4.4 out of 5 stars 108 ratings
Available from these sellers.

Comfort, convenience and thoughtful ergonomics come together in the versatile Movario 5 hand shower. Though compact with a 4-in.-diameter spray face, it features a Rotahead System that enables it to function as a showerhead or body spray when mounted on a shower arm. Users adjust the spray angle and position to one of eight preset positions. Moreoever, the hand shower comes with five spray modes: Normal, an all-encompassing spray pattern; Jet, which delivers a focused and circular burst of water; Rain, a soft and wide spray pattern; the vigorous Massage; and water-efficient Champagne, which consists of large, air-enriched droplets. GROHE DreamSpray features advanced shower engines to deliver precise and consistent water distribution throughout any spray pattern for an unparalleled and custom showering experience distributes water evenly to each spray nozzle and GROHE SpeedClean anti-limescale system makes cleaning them a breeze. The Movario Five has a 2.5-gpm flow and comes in sparkling GROHE StarLight finish for scratch and tarnish-resistant surfaces for a lifetime of beauty chrome, which will not scratch or tarnish.

Tea Drinker
5.0 out of 5 stars Hands down better than the Vida Alegria
10 March 2018 - Published on Amazon.com
Colour: StarLight ChromeVerified Purchase
I originally purchased the Vida Alegría H5+ 2.5GPM Handheld Shower Head with Steel Hose, Holder, 5 Sprays (Chrome) for $53 from Amazon, based on the great customer reviews. I was looking for a handheld that has a nice spray for showering, a rain type spray for washing the dogs and a hard massage. First, I had to remove the restrictor, which I did with my Dremel by coring it out. It worked okay, but the massage wasn't hard enough for my taste.

So, I ordered the Movario, which my local shower store told me was the Rolls Royce of shower heads. However, my local store couldn't order it for me, because he said it's illegal to sell in California. So, I ordered it from Amazon, where they shipped it to me in California. I used it first with restrictors and it was good, but the massage wasn't hard enough. Then, I removed the harder core restrictor of the two in it. It was easy to pop out with tweezers. No Dremel needed. I reinserted the white, lighter restrictor. It is perfect! The massage is exactly the right amount of hard. The rain is perfect for the dog and the shower spray is lovely and I'm also enjoying merging some rain into the spray, which is a nice feeling.

This is the Rolls Royce of shower heads. If you want a powerful massage, this is the shower head for you. Our water pressure isn't fabulous... it's sort of middle of the road, but with this showerhead, it was great. Both my husband and I strongly prefer this one to the Vida Alegria we initially purchased. We will pass that one off to the college kid, who will love it and we will keep the Rolls Royce!

You definitely get what you pay for with the Movario. If you live in California, hurry up and order it before Amazon figures out they aren't supposed to ship it to us!
Read more
8 people found this helpful

CeeJay
5.0 out of 5 stars LOVE!! All good!
5 June 2020 - Published on Amazon.com
Colour: StarLight ChromeVerified Purchase
I bought this to replace an expensive Delta handheld shower head that was only 1.75 years old. One of the three buttons on it that control the spray pattern became stuck down, impairing my most favorite spray pattern. This Grohe model, though not inexpensive, is far superior to the Delta I had to replace, and is well worth the cost.
The process of replacement couldn’t be easier. Unscrew the old one, screw in the new one. That ‘s it. No tools needed. I immediately appreciated the increased water pressure this Grohe provides — 150% greater pressure than the previous shower head. I’m so pleased with this, there is no thought to removing any flow restrictors. It’s heavenly the way it is! While this Grohe does have fewer spray patterns than the Delta *purports* to have, these are all much simpler to access by simply turning the dial on the spray head, as opposed to fiddling with buttons in various permutations. The spray patterns on this Grohe model are more than sufficient to meet my requirements. I love everything about this shower head. It exceeds my expectations. To say I highly recommend it is an understatement.
Read more
3 people found this helpful

MC
5.0 out of 5 stars Perfect fit, finish and function
27 November 2018 - Published on Amazon.com
Colour: StarLight ChromeVerified Purchase
I have been specifying Grohe hand showers for my projects for years and this model is as excellent as any they make. Five spray options, superb water distribution, immaculate finish and a long history of outstanding excellent service. This one is now making my son smile every time he takes a shower. Simply the best at the price of the rest.
Read more
One person found this helpful

I Don’t Like Made in China Stuff
5.0 out of 5 stars HIGH QUAILTY
6 August 2020 - Published on Amazon.com
Colour: StarLight ChromeVerified Purchase
When I first got this it was a bit lower in pressure than the 18 year old Waterpik that it replaced. I went ahead and carefully removed the pressure regulator and now it sprays really nice. It is pressed in so I found that it can be removed with a couple of angled dental picks without damaging it. It is easy to reinstall if you ever want to but If you're not too worried about the water bill, then you will never want to do that. The qualty is excellent on this part. I've found that I never use the head swivel feature on this as the angle that it already has is perfect. I probably would have been just as happy with one of the fixed head models. Great product though!
Read more

pk
4.0 out of 5 stars Great shower head, but hard to change settings
4 April 2016 - Published on Amazon.com
Colour: StarLight ChromeVerified Purchase
I really like this shower head! There's more water pressure from this hand shower than from another one I recently bought. I do have a hard time changing between settings because the shower head rotates - I may be doing something wrong, but the entire head rotates and I can't seem to just rotate the face, while showering. If I can hold the head in place, then I can twist just the face to change the settings. But since I don't need to do change it often, it's mostly not an issue.
Read more
3 people found this helpful
Go to Amazon.com to see all 63 reviews 4.4 out of 5 stars
Back to top
Get to Know Us
Connect with Us
Make Money with Us
Let Us Help You
© 1996-2021, Amazon.com, Inc. or its affiliates