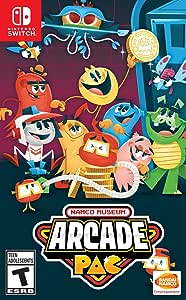 Save your quarters and bring the arcade home with the ultimate 2-in-1 game 'pac', NAMCO MUSEUM ARCADE PAC! Enjoy the nostalgic classics in "Namco Museum" and the flashy Maze madness of "PAC-MAN CHAMPION EDITION 2 PLUS" with friends or solo, at home or on the go for exciting arcade fun wherever you are - exclusively for the Nintendo Switch!

Save your quarters and bring the arcade home with the ultimate 2-in-1 game ‘pac’, Namco Museum Arcade Pac! Enjoy the nostalgic classics in 'Namco Museum' and the flashy maze madness of 'Pac-Man Championship Edition 2 Plus' with friends or solo, at home or on the go for exciting arcade fun wherever you are – exclusively for the Nintendo Switch!

Micah hannam
1.0 out of 5 stars NO CARTRIDGE!!! Beware Possible Scam
28 February 2019 - Published on Amazon.com
Verified Purchase
No Cartridge! Ordered on a Monday for my wife who loves Pacman games. Came 2 days later on Wednesday. Wrapped it up to give as a cute gift for my wife. She was very excited when she saw what it was. Unfortunately that excitement turned to disappointment when she opened the sleeve and there was no cartridge! The sleeve was wrapped in cellophane so it appeared to be factory sealed. Sorry I don't have a photo, but I can't take a picture of what I never received. Trying to return the empty sleeve. Best option I could think of is "Missing Parts". Hopefully they accept my explanation.
Read more
44 people found this helpful

Michael
5.0 out of 5 stars physcial release of two previous digital only releases
30 September 2018 - Published on Amazon.com
Namco released "Namco Museum" and "Pacman Championship Edition 2 Plus" earlier this year for Switch. Now they're releasing both of them together on a physical cartridge. Namco Museum is $30 digitally and The Pacman CE2 Plus is $20 digitally. This is one of the few times that it's actually less to buy them physically than digitally! I think it's better if I give a review of both games separately:

The Pacman Championship Edition (PCE) series was an attempt to modernize classic Pacman gameplay. The pinnacle of the game was the second game which actually is PCE DX. Then the third came called PCE 2 came in 2016. In my mind PCE 2 over-complicated a little bit where DX was simpler but simply perfect.

But when PCE 2 came out for the Switch as PCE 2 Plus, they added co-op. You can play standard PCE 2 or PCE 2 Plus which is the co-op version. To me, co-op turned a good game into a great game. If you have a good partner for this, it's awesome. The regular PCE 2 is pretty good, but I really wish they threw in DX. But the PCE 2 Plus with co-op was a great idea and I don't miss DX anymore.

The Namco Museum is an odd collection. Yes, you get 10 old arcade classics and one modern classic. You get Pac-Man, Galaga, Dig Dug, The Tower of Druaga, Sky Kid, Rolling tunder, Galaga '88, Splatterhouse, Rolling Thunder 2, and Tank Force. Then you get Pac Man VS which was a gamecube game.

They did well converting the arcade games to switch. The did do some really good stuff in allowing vertical play. That helps it fill the switch screen much better. The HD rumble addition is surprisingly good. You can tell they put some effort in.

I just wish they would have added a few more games or switched out some games. The 10 arcade classics are pretty good, but I keep missing things that aren't here. Why didn't they give us Mrs. Pacman? Why isn't Xevious here? Dragon Spirit would be really cool vertical.

But it is really awesome to get a new release of Pac Man VS. It's awesome when played as intended, but you need two switches! Thankfully the second switch only needs a free download. The free download is in the e-shop as "NAMCO MUSEUM (PAC-MAN VS. Free Multiplayer-only Ver.)". You can play on one switch, but you can only play the ghosts and you chase the computer controlled Pacman.

But if you have two switches and some friends, this is a lot of fun. On one switch up to three people control ghosts. It's best if this is on a TV. The ghosts can only see a limited view of the board and are chasing pacman. The other switch is pacman who can see the whole board and tries to eat dots and ghosts with power pellets. It's best if the second switch is played in portable mode. There are a lot of map options. Four people is the way to go. It's just a lot of fun!

The best parts of this require multiple people. Pacman CE 2 Plus is really great game with two people. Pacman VS is pretty awesome with four players. The rest of the arcade games are good versions of the arcade games, but I don't see myself spending a lot of time with them. Really to me this is worth it for the two Pacman multiplayer games. CE 2 Plus has been really fun with my kids. VS has been really fun with my kids and also as a party game. I like this a lot and do suggest it, but I can see why this release wouldn't be for everyone.
Read more
75 people found this helpful

John Robinson
5.0 out of 5 stars Great bunch of games and Pac-Man has never been better
28 December 2018 - Published on Amazon.com
Verified Purchase
The reason I purchased this is the Pac-man games, mainly the original Pac-man game, Pac-man was may favorite game back in the 80;s I was able to get to the 6th key which was my best game, after playing the original game on the Switch it's an excellent copy of the arcade version, all the patterns work exactly like they did back in the day, even the hiding place is there.
Now Pac-Man Championship version I wasn't sure about at first cause I never played it in the arcade version, but it takes Pac-man to a whole new level, more like Pac-Man on steroids! I fell in love with it after a while it's a the best Pac-Man game I've played and that's from someone that grew up loving the original Pac-Man.
For the other games Dig-Dug, Splatter House, Rolling Thunder I & II, Tower of Druaga, Tank Force, Sky Kid, Pac-Man vs. and let us not forget the two Galaga games is just as I remember it for me arcade, I mean the sound and the graphics are the same from the arcade. I did not care for Sky Kid even back in the arcade from the late 80's and during the 90's, I think the one I like the best is Rolling Thunder II you can tell from the artwork from the game that the old pinball machines had an influence on Rolling Thunder II this one held my attention more that the others.
Splatter House is my second favorite but a little more difficult than I remember but that's okay I going to really get into this one more, I had this one on my old Sega Genesis and I was so much better cause it gave you unlimited lives.
But Let us not forget Pac-Man Championship Edition is clearly the best game in the bunch, this whole bundle of games I really like cause it brings me back to the days that you could go to the arcade and just spend one quarter per game, so I had a great time with a few dollars and could spend a hour just getting away from everything.
Thank for reading my review.
Read more
16 people found this helpful

aktvst
2.0 out of 5 stars Way overpriced.
6 January 2019 - Published on Amazon.com
Verified Purchase
The game is more or less what is advertised. It's just absurdly overpriced for what the game is. This game is worth about $10, no more. Namco is cashing-in on the unwitting casual Switch gamer with this one.
Read more
17 people found this helpful

Mr. Game&Grump
3.0 out of 5 stars PS4 import was better.
19 November 2019 - Published on Amazon.com
Verified Purchase
I bought this because I'm on tight budget and getting few arcade games in a single cartridge for about $30 isn't a bad deal but unfortunately this import has few flaws.

For instant the controls for Pac-Man is really delay where I if want to make a last second before turning it doesn't work at that very second but that only the original Pac-Man and another flaw is the screen size that about the same size as owning those $10-20 mini arcade with no screen enlargement options to put the game in full size.

The worse part is my PS4 version has better option for screen size and only paid less $20 for it which works better then the Switch.
Read more
9 people found this helpful
Go to Amazon.com to see all 120 reviews 4.2 out of 5 stars
Back to top
Get to Know Us
Connect with Us
Make Money with Us
Let Us Help You
© 1996-2021, Amazon.com, Inc. or its affiliates