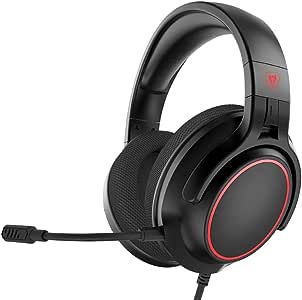 NUBWO N20 Headset is a primary kind of gaming headset for PlayStation 4, Xbox one, PC, Laptop and Mac Games which brings you vivid sound field, sound clarity and sound shock feeling. Its super soft over-ear pads is more comfortable for long time wear, and it is a great headphone especially perfect for gamer!

ctsurv553
5.0 out of 5 stars Large headset with microphone for gaming, Skype, video teleconferencing
3 June 2020 - Published on Amazon.com
Colour: RedVerified Purchase
Pros/Features:
1. Large earphone cups fully enclose the ear to cut out as much background noise as possible.
2. Earpieces are thickly and softly padded, should be comfortable for many hours of wear.
3. Sound quality pretty good at this price point. Perhaps not quite as good as you would get with a set of $50 Sony headphones, but noticeably better than my $15 Logitech headset. Listening to music in WinAmp, I had to tweak the audio equalization a bit to optimize the frequency responses. Without equalization, the headset sounds "tinny": music is flat, weak in both the bass (50 hz to 400 hz) frequencies and the highs between 2000 hz and 6000 hz. After fiddling with the equalizer, I was able to get the response and tonal quality of the headphones to more or less match my Sony headphones. I am listening to Bob Segar's "Night Moves" as I type this, and I have to admit it sounds as good on these Nubwo's as my Sony MDR-ZX110 phones, which are my go-to PC or Android music headphones.
4. When I tested the boom microphone, the volume was far too low for a Skype call or Zoom teleconference session. This headset does not have an on-board, battery powered microphone pre-amp, and even with the Microphone Input setting at 100% in the Realtek Audio mixer panel, the mic still could not deliver more than about -40 db volume when I tried to record my voice in Audacity. This was with the mic about 1" in front of my mouth, speaking in a normal voice level. I could get the input to maybe -20 db by shouting, but that's not practical. I then went into Microphone Properties > Recording > Levels > Microphone Boost, and set the Boost level to maximum, which is +30 db. This let me record normal voice at -10 db, loud enough, but the downside of this Boost setting is it introduces a lot of static hiss into the input that some people might find objectionable. However, offsetting this issue is that the boom is very nicely placed, and plenty long enough, and it puts the mic right in front of your mouth, so there's no question that it's picking up as much of your voice as possible.
5. Comes with a 3.5mm, 4-conductor male plug for use with devices such as Android phones and tablets natively, and it ships with a splitter adapter to let you use the headset with a PC, where the mic and headphones are two separate jacks.
6. The headphone shells are clearly marked with "L" and "R", so you don't have to guess which cup to put over which ear. My Sony headphones don't have any obvious marking to tell you which side is Left and Right. The boom mic socket is on the left earphone cup only.
7. The headphone cups fold down flat, so you can easily store them in a headphone carrying case (not included), assuming you can find one that is large enough.
8. In-line volume control and Mic on/off switch. I actually kind of wish these phones didn't have this: in my experience, these in-line controls are usually the failure point that causes an otherwise perfectly good headset to have to be discarded and replaced. I hope the manufacturer sourced a good quality part for this switch and volume control, that won't disintegrate in 3 or 4 months.
9 . The cable is long enough for me to plug it into the rear panel audio jacks on my Mid-tower PC chassis; you don't have to use the front panel audio jacks, or an extension cable, unless you need to sit more than 4 feet away from the computer.

CONS:
None of any major concern. Maybe one: these phones are big and bulky, and too large to be carried in anything smaller than a back pack or gym bag. You won't be carrying these in a purse or coat pocket. But the largeness is part of why they are so comfortable to wear, so it's a trade-off.

Summary: This is a decent headset for under $50. Both the headphone and microphone audio quality are not quite as good as what you get on a $400 headset, but you get what you pay for, and for under $50, these are at least as good as any other $50 headset, and maybe better and more comfortable than some more expensive headsets with smaller earcups. The only feature I wish these had is a more sensitive microphone that could deliver a stronger signal to a PC sound card.

Benjamin Trotter
5.0 out of 5 stars Comfortable fit, good quality mic
6 July 2020 - Published on Amazon.com
Colour: RedVerified Purchase
This headset fits nicely and the large ear pads do a great job of isolating outside noise. I can hear every footstep and trap with these while I am playing my game. My squad can hear me clearly though my mic without background noise. The mic is also detachable for listening to music of playing games where I do not need it.
Read more

Nikki
5.0 out of 5 stars Works great on the games I play . Like Apex and Call of duty on my Xbox one
17 August 2020 - Published on Amazon.com
Colour: RedVerified Purchase
Amazing sound quality from these little things I was surprised. When my son requested these I thought they were only for a personal reason of just wanting the sound right in this ears my spoiled little gamer . But really they are to help hear more than you ever would just by listening in the tv. I was surprised by all the additional noises you could hear. The people sneaking up on you and even rhe crickets chirping in the background its like they are all right there. Makes it seem so much more interactive and real life. I fell in love with thrse so much I actually bought my own set. The sound on these is so much better than ear buds. Perfect gift for anyone. My son plays apex and COD and said these works amazing to hear.
Read more
37 people found this helpful

otterpopdotorg
5.0 out of 5 stars Nothing not to like about these headphones
28 January 2020 - Published on Amazon.com
Colour: RedVerified Purchase
At first, I had a problem with my microphone not working. The issue was not the headphones, but that I had plugged them in after starting the game I was playing. (Fortnite) My Xbox One S did not detect it as a microphone-capable headset but only as headphones. I finally figured this out by hitting the Xbox button and on the home screen in the top right corner, it showed the wrong icon. I unplugged and plugged them back in while still on the home screen and the headset with chat mic icon switched on. Back in business.
The sound is shockingly good and the mic was able to pick up my cat purring next to me on the couch (no other sound going on in the room) while I was playing. The sound is full, and if you find it to be low volume, remember that in the console (PS4 or Xbox) settings you can increase the volume which in turn makes the headphone volume knob more responsive.
I tried to find something less than great about these headphones and I guess the only things I can come up with are (nitpicky) that they have a vinyl head cushion which will eventually break down in time, and that they are slightly on the heavy side however they are not uncomfortably so. In fact, the ear cushions are really nice and they don't pinch my glasses too tightly. If they break I will buy another pair of the same ones without hesitating.
Read more
31 people found this helpful

Matthew Robert
5.0 out of 5 stars Excellent build quality, Extremely comfortable
4 January 2020 - Published on Amazon.com
Colour: RedVerified Purchase
How cow! These went above and beyond my expectations! The cord is totally over threaded which is amazing for the price I paid for them. Such care for the build quality went into these.
The earcups are perfect on my ears with no discomfort at all which is exactly what I hoping for. The Bass is smooth and not overwhelming. They don't get ridiculously loud but definitely loud enough. Sound quality is good, obviously wont be supreme but for the price of these I have no complaints AT ALL!
These are perfect and totally will buy another pair just incase they stop selling these for any reason.
Read more
25 people found this helpful
Go to Amazon.com to see all 470 reviews 3.9 out of 5 stars
Free & fast delivery, movies and more with Amazon Prime
Prime members enjoy free & fast delivery, exclusive access to movies, TV shows, games, and more.
> Get started
Back to top
Get to Know Us
Connect with Us
Make Money with Us
Let Us Help You
© 1996-2020, Amazon.com, Inc. or its affiliates