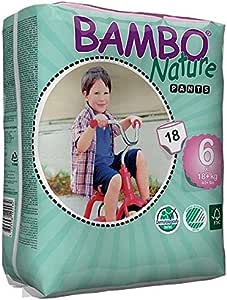 Bamboo nature training pants are hypoallergenic, eco-friendly and certified free from harmful chemicals. Bamboo nature has earned the Nordic Swan Eco-Label, asthma-allergy Denmark, FSC and over 20 environment and social labels ensuring that our products are safe, Certified free of all dangerous chemicals. Percent phthalates, 0-percent organotins (MBT, DBT, TBT), 0-percent heavy metals, 0-percent Cl (chlorine), 0-percent HCHO (formaldehyde), 0-percent Collophonium, 0-percent azo-pigments, 0-percent PVC, and 0-percent substances known as harmful to health Or the environment. Certified free of all known allergens or substances classified as locally irritating, sensitizing, carcinogenic, or mutagenic. 0-Percent toxins bamboo nature training pants are approximately percent biodegradable, all wood pulp is derived from sustainable tree Farms, and the manufacturer has released a life cycle assessment proving a reduced amount of Emissions and almost no waste. To help minimize impacts on the environment and our health, The manufacturer has voluntarily elected to undergo rigorous environmental inspections of their products. The setting of criteria is based on an assessment of impacts during the whole life-cycle from raw material to production, consumption and waste. Bamboo nature, chemical no thanks. Size 5 fits weights from 26.5-44 lbsand size 6 fits weights 40+ lbs; The most absorbent, highest quality eco-friendly diaper in the world; certified free of dangerous chemicals and all known allergens; softer materials and softer core, better fitting and thinner, same performance as always; Nordic Eco label, FSC label and dermatological tested.

2.0 out of 5 stars
2 out of 5
1 customer rating
How are ratings calculated?
To calculate the overall star rating and percentage breakdown by star, we do not use a simple average. Instead, our system considers things like how recent a review is and if the reviewer bought the item on Amazon. It also analyses reviews to verify trustworthiness.

Sammy
4.0 out of 5 stars Best of the eco-friendly brands
1 May 2017 - Published on Amazon.com
Verified Purchase
My son potty-trained at 2 1/2, but 4 years later (sigh) is still not dry every night. If we remember to take him when we go to bed or he wakes on his own at night he is good, but that doesn't always happen and he wets 2-4 times a month. I used cloth diapers when he was a baby, and continued using them at nighttime until he was about 4 1/2. But he couldn't put them on himself at bedtime, and if he got up at night to pee he couldn't put them back on after using the potty. Finally, he outgrew all our cloth diapers and I didn't want to invest in bigger ones or cloth pull-ups since he is my youngest and I hoped he'd be done bedwetting any day (ha!), so I decided to find an eco-friendly and non-toxic disposable.

I tried several eco-friendly brands and these were my favorite.
Pros: Eco-friendly, and I felt comfortable with them next to my son's body. Cute but low-key design, no licensed characters, and very inconspicuous under PJs (especially after cloth diapers!). Least leaks of the kinds I tried. My son is very tall and skinny so a good/tight fit around the legs was important to me and these worked until he outgrew them (see below).

Cons: Most mornings we throw away a perfectly dry pair, but he absolutely refuses to wear them more than one night in a row, so these do get pricey. I ended up subscribing by the case directly from Bambo. Now at 6 1/2 years old and 50 pounds, though, he is outgrowing these, and half the time he leaks through them. I think because he pees too much, but also because they crawl up his bottom a bit because he is too big/tall for them and that doesn't help them be in position to catch the accident properly. I wish they made a bigger size with a larger capacity. I am finishing up our last package and will probably move on to a conventional disposable pull-up like GoodNights or UnderJams.

Also, the sides rip pretty easily. Great for taking off in the mornings, but occasionally (like maybe 5% of the time) they rip at night when he is pulling them back up after going to the bathroom in the middle of the night.

Good while they fit him, though, and I would recommend.
Read more
31 people found this helpful

Demian
1.0 out of 5 stars Terrible new product with the same name
13 February 2018 - Published on Amazon.com
Verified Purchase
BE AWARE DO NOT BUY. This latest supply at Amazon is either a fake product or a disaterous attempt by Bambo for extreme cost cutting. They are vastly inferior to previous products. It’s a big shame these are being sold under the same product name. They are very clearly not the same. Notice how so much thinner the new version is on the left in photo provided. Have used Bambo for 2 years and now am switching out and never going back. Do not buy any Bambo products if you care about your baby.
Read more

1.0 out of 5 stars Terrible new product with the same name
Reviewed in the United States on 13 February 2018
BE AWARE DO NOT BUY. This latest supply at Amazon is either a fake product or a disaterous attempt by Bambo for extreme cost cutting. They are vastly inferior to previous products. It’s a big shame these are being sold under the same product name. They are very clearly not the same. Notice how so much thinner the new version is on the left in photo provided. Have used Bambo for 2 years and now am switching out and never going back. Do not buy any Bambo products if you care about your baby.
Images in this review

GulfGirl
5.0 out of 5 stars Seriously the BEST disposable EVER.
21 July 2019 - Published on Amazon.com
Verified Purchase
I try really hard to use cloth diapers, but in some cases - like traveling - it's just not really practical. This brand makes me feel better about an investment in disposables, but they are the most comfortable, soft, and absorbent diapers on the market. Hands down. Nothing else like them so far, even the ones that begin with H and 7th.
Read more
4 people found this helpful

jm
4.0 out of 5 stars No rashes or reactions when wearing these training pants and they are soft and comfortable. Though they are more expensive than
21 June 2016 - Published on Amazon.com
Verified Purchase
We use these training pants for overnight wear for my 3 year old. The only times we have had a leaking issue (which has only happened very infrequently) was because my son didn't position the leg gussets appropriately.