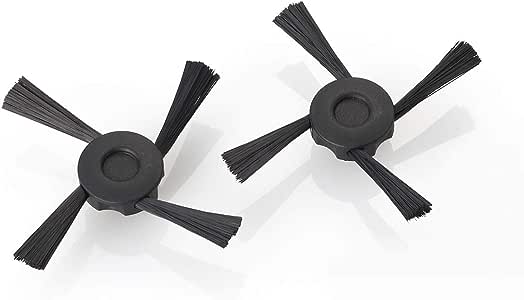 Perfect for Homes with Pets and Allergy Sensitivities.The Neato Botvac Series Brush Kit keeps your Neato robot working at peak performance. Includes the Combo Brush which offers superior pick-up of pet hair. Plus 2 side brushes keeps your robot cleaning close to walls and deep into corners. The Cleaning Tool lets you keep your brush and filters clean.

P. Macy
1.0 out of 5 stars Waste of money!
18 November 2016 - Published on Amazon.com
Style Name: Side Brush PackVerified Purchase
Do not buy. A waste of money. I thought by the listing these were original Neato sold by third party sellers. They are not Neato brand. Because I have two Bots (one upstairs and one downstairs), I purchased multiple 2-each bags of these. I've been "using" them for a few weeks & they are worthless. But failure of the most recent 2 brushes have compelled me to write this negative review. I attached a new brush today because within a few uses of the previous one, the brushes had frayed, balled up, and become a tangle. One use of the newest brush, and it is gone. This isn't the first time these knock-off brushes have come off during a cleaning. The magnet isn't strong enough to hold brush on. I had used the original Neato brushes probably longer than I should, but they never came off unless I took them off to clean. I will be looking for a source for original Neato brushes--they are worth the higher price!
Read more
17 people found this helpful

MisterGSF
1.0 out of 5 stars Not Original Parts!!!
29 February 2016 - Published on Amazon.com
Style Name: Side Brush PackVerified Purchase
These are not genuine Neato parts! They have less bristles per group and the look and quality are nothing like the original. Please see my photo; top brush is original, bottom two are the replacements.
Read more

Wandrwoman
3.0 out of 5 stars Doesn't Last Long / Not the BEST for Pet Hair
6 July 2019 - Published on Amazon.com
Style Name: Full Brush KitVerified Purchase
I have a Neato D6 which comes with the Spiral Combo Brush (SKU 945-0305) that the manufacturer describes as "Best for picking up pet hair."

This is NOT that brush! Nope, it isn't. Even though THIS brush is a spiral and THAT brush is far, far less of a spiral, THAT one is called the "Spiral Combo Brush" and take it from me, if you have pets that shed, you want THAT brush NOT this one!

This is the Combo Brush (SKU 945-0198) that the manufacturer describes as "Great for picking up pet hair."

You see what Neato did there? The difference between "Great" and "Best!" One is great but the other is better than great, because it's the BEST.

Bad news! You can't buy THAT brush, the Spiral Combo Brush, that is best for picking up pet hair on Amazon. You have to get it directly from Neato.

How do I know all this? I bought this brush, foolishly thinking that "Great" was something I wanted and would be happy with.

This brush fit my D6 perfectly and had a pronounced spiral of alternating rows of brushes and plastic"flippers."

The first time out with this new brush, my D6 consumed a catnip mouse that was hiding under a chair. I had to remove the brush to extricate the mouse. This not so unusual encounter had broken off a large piece of plastic flipper and the new brush wasn't even an hour old.

I've used this brush for months now and most of the flippers are gone. Some to mice, but others just gave out and got sucked into the dust bin.

Not only do the flippers not last long, but the brush, which is best for deep pile carpets, is quite difficult to clean and it needs to be cleaned quite often. All sorts of dusty things and human hair gets embedded in the bristles and require frequent digging out with the comb cleaner.

I eventually switched back to the old but original brush that came with the D6. At least, even though it was somewhat worn, it was still intact. It is better picking up pet hair, and it is easier and faster to clean.

And isn't that the point of these Vacuum bots?

t3t4
4.0 out of 5 stars Got pet hair and carpet? This is what you need.
19 December 2018 - Published on Amazon.com
Style Name: Full Brush KitVerified Purchase
I love my D75, but it sucks at picking up cat hair from carpet. The vinyl paddle wheel beater bar is okay, but it smooths in pet hair to carpet, rather then picking it up as you might expect. So an upgrade was a necessity for my situation. I really think this kit is way over priced, but they got ya by the short and curly's and they know it! Whatever, you need this for pet hair and it does it's job properly. Of-coarse, now that I'm picking up cat hair I now have to clean the brush, so it's not without maintenance so much as the vinyl wheel was, but I don't care as long as it picks up all this cat hair! It does a really good job I'd say.

The side brush is a bit different in this kit. It has one more leg and much stiffer bristles then the original brush. You might think that's a good thing, but it depends on the kind of dirt your machine regularly picks up. For me, it's cat hair and cat litter galore. A stiffer brush on the beater bar picks the hair from the carpet, but a stiff side brush will sling the cat litter more then a softer bristle would. I only have two of these 5 leg stiff bristle brushes (came in kit) but I have more of the 4 leg soft ones from a filter kit I purchased previously. So it's all good for me, I can pick and choose which brush at what time, for you it might be different. This stiffer 5 leg side brush is no doubt better on carpet, but on hard flooring it may or may not send some dirt flying?! This is a needed thing but still too expensive for what it is in my opinion. It all depends on the dirt; that's what she said so that's where I end.
Read more

A. S. Decker
1.0 out of 5 stars Poor quality, way below what I expect from Neato official products.
26 November 2017 - Published on Amazon.com
Style Name: Full Brush KitVerified Purchase
To make a bad review short:

1) Whenever I used the Botvac D85 that I own with the replacement brush it would make a screeching noise that was awful to hear and impossible to ignore. The Botvac did not do this with the brush that was formerly in or with the all plastic brush it also comes with.

2) The side brushes were too large and literally would not spin when installed.

Don't buy it.
Read more
5 people found this helpful
Go to Amazon.com to see all 302 reviews 4.1 out of 5 stars
Free & fast delivery, movies and more with Amazon Prime
Prime members enjoy free & fast delivery, exclusive access to movies, TV shows, games, and more.
> Get started
Back to top
Get to Know Us
Connect with Us
Make Money with Us
Let Us Help You
© 1996-2020, Amazon.com, Inc. or its affiliates