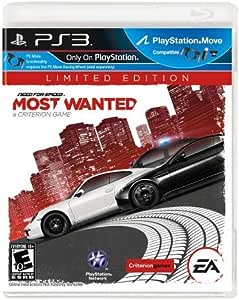 Add to Cart
S$111.80
+ FREE Delivery
Sold by: GenerousMAN
Have one to sell? Sell on Amazon

Need for Speed Most Wanted - Playstation 3

by Electronic Arts
Platform : PlayStation 3
Only 1 left in stock.
International product from outside Singapore
Ships from and sold by Amazon US.

To be Most Wanted, you’ll need to outrun the cops, outdrive your friends, and outsmart your rivals. With a relentless police force gunning to take you down, you’ll need to make split second decisions. Use the open world to your advantage to find hiding spots, hit jumps and earn new vehicles to keep you one step ahead.

In true Criterion Games fashion, your friends are at the heart of your experience. In an open world with no menus or lobbies, you’ll be able to instantly challenge your friends and prove your driving skill in a variety of seamless multiplayer events. Your rivals will do everything they can to stop you from getting to the top. In this world, there can only be one Most Wanted.

Pono
2.0 out of 5 starsA step DOWN from the original Most Wanted
6 April 2017 - Published on Amazon.com
Verified Purchase
I didn't realize the lack of creativity this would have. It's nothing like Most Wanted for 2007 PS2. The only similarity is the map layout but the gameplay is pretty different... there's no garage to go to, you don't buy cars from a shop or edit their appearance. There are some kits you can unlock and you can change the color of it but that's as far as editing and detailing goes. There's nice cars and the racing can be fun so if you want that then this is a good game only giving that it's so cheap.
Another let down are the police chases, there's no break away things (kinda look like this symbol 🔺) that you can hit that total the police cars like in PS2. Which made the police chases a lot less fun for me. Also the cooldown zone isn't used in this, you just hide anywhere. Whereas in the PS2 version you have to go to a cooldown zone to make the cooldown happen faster or you could go to your garage to evade but this one doesn't have that.

Ellipses
3.0 out of 5 starsPhoto-realistic...
16 December 2019 - Published on Amazon.com
Platform For Display: PlayStation 3Verified Purchase
Like the name says, EVERYTHING in this game is photorealistic looking, & sounds awesome, but it's not perfect! The races vary from easy to impossible, the cops can be VERY difficult to lose in SOME areas, yet easy in others, the cars rang from weird, to obscure, to awesome, & the freeroam is fun, & has realistic traffic (yet no people out of cars...). Now for the bad parts: The cars control weirdly, not bad, or poorly, just odd enough that You have to 'get used to it', even if You play lots of racing games... there's only 2 views, close behind the car, which I hate, & a bumpercam that's literally 1 scale foot off the ground, & induces massive motion sickness (I always use hood cam in games), so personally I'm VERY unhappy with either view, thirdly not only is there no choice fir car colors, & no ability to put stickers on them, & You have to be online to change Your' plates, BUT if You do get in a car You like, & keep driving through a gas station until it's the color You want, if/when You have to repair, & You will, either during a race, or running from cops, it will change the color again! It's a good game, with great graphics, & an awesome, & realistic world to play in, but it could/should have been better.
Read more

Big Russ
1.0 out of 5 starsCould never get it to run, could not see controllers
15 June 2017 - Published on Amazon.com
Platform For Display: PlayStation 3Verified Purchase
We could never get the game to run on our PS3. None of the controls would work. When we went into the set up menu our controller did not show up, nor did our staring wheels show up. My guess is a set up problem, but all of our other car games, Grand Turismo 5 as an example, 8 years old, but can see and use the steering wheels we have. Need for Speed can't even see the hand controllers that came with the PS3, go figure. Searching Electronic Arts for a solution provided nothing. We waited for about 45 min on the EA chat for someone to talk to, but dinner was being served so we bagged the game and it has never been played.
Read more
One person found this helpful.

Zurkon
5.0 out of 5 starsA Paradise of arcade racing
6 January 2013 - Published on Amazon.com
Platform For Display: PlayStation 3Verified Purchase
First things first... If you liked Burnout Paradise,and this is what I'd consider a spiritual sequel to it, you'll love this game!

This isn't a "normal" Need for Speed game. As mentioned, it's more like the outstanding Burnout Paradise. It's an open world racer that is arcade styled - not a simulation like Forza or Gran Turismo. Powersliding is easy to accomplish, fun, and necessary to do well in this game.

Races are found by cars. Drive around, find the cars on the map, and hit Triangle ('Y' on Xbox) to hop in and drive it. You now own this car and can choose it at any time. Once in a car, it will have 5 races assigned to it. Complete races, and the better you do, the better upgrades you'll get - such as nitro, tires, engine, etc. Other races are to rise on the Most Wanted charts, and can be raced with the car of your choice. A GPS-ish method will take you to races.

Like Burnout Paradise, there are gates to be smashed, and billboards as well. Lots to find, interesting areas to explore, and outstanding graphics. Music is standard Need for Speed. Lots of different styles, and access to your own music.

Like most recent racers from EA, it's a very social game. What your friends do will show up in many places and can challenge you to one up them. An interesting feature!

Burnout Paradise is one of my all time favorites, and this game is proving to be just as addictive. Highly recommended!

McShopper
4.0 out of 5 starsDifferent
7 August 2013 - Published on Amazon.com
Platform For Display: PlayStation 3Verified Purchase
I bought this because I loved the Most wanted game that was released with the xbox 360 launch. In the conversion to PS3 they made a lot of changes that I am not 100% happy with. I understand that the publisher wanted to make it more current for a re-release 5 years later to boost sales, but I really loved the feel, story, and look the original game. The controls in this game are very loose, hard to get used to (I find myself in wrecks more than I am racing). Graphics are better, however they changed all the scenery and roads, at times there is too much and when you are racing at 150-200mph all that extra stuff just gets in the way. The story line is different too, the original started off with a story that I thought was great, I love to have a story with a racing game, although i know that not many other gamers care, they just want to race. This Game you have a 30 sec intro and you are driving and racing. I have only played it for 6 hours and still getting used to it, but was disappointed on how different it is from the original release. I think I will still enjoy it when I get used to the roads and controls, just right now it is a little frustrating. Also if you do buy this, there is a long load time so don’t get mad when you throw the disc in and it says 60 Min load time (I have 18MB download, so I could not imagine what this would be on a slower connection)
Read more
One person found this helpful.
Go to Amazon.com to see all 663 reviews 4.3 out of 5 stars
Free & fast delivery, movies and more with Amazon Prime
Prime members enjoy free & fast delivery, exclusive access to movies, TV shows, games, and more.
> Get started
Back to top
Get to Know Us
Connect with Us
Make Money with Us
Let Us Help You
© 1996-2020, Amazon.com, Inc. or its affiliates