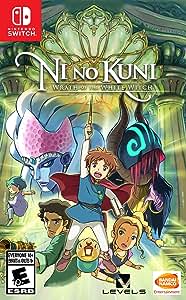 Ni no Kuni: Wrath of the White Witch - Nintendo Switch

by Bandai Namco
Platform : Nintendo Switch
4.5 out of 5 stars 2 ratings
Available from these sellers.

"Journey back to the other world in Ni no Kuni: Wrath of the White Witch. LEVEL-5’s classic tale returns better than ever. Join Oliver as he embarks on an adventure through a world inhabited by new friends and ferocious foes alike in the hopes of bringing back his mother after a tragic incident. With a copy of the Wizard’s Companion in his hand and his trusty friend Drippy by his side, he will travel across this rich fantasy world to tame familiars, take on enemies, and overcome the countless challenges that stand between him and his mother’s salvation.

This charming tale unfolds through the use of animation storyboarded and created by the legendary Studio Ghibli and music composed by the renowned Joe Hisaishi. Ni no Kuni: Wrath of the White Witch combines beautiful animated visuals, masterful storytelling, and a sweeping score to create an epic role-playing adventure like no other.

• TAKE THE OTHER WORLD WITH YOU - Take Ni no Kuni: Wrath of the White Witch wherever you go on Nintendo Switch
• ALL-STAR PRODUCTION - LEVEL-5’s mastery of the RPG genre is combined with Studio Ghibli’s world-class animation and music composed by the renowned Joe Hisaishi
• CAPTIVATING STORY - A charming yet tragic tale unfolds through the use of animation storyboarded and created by Studio Ghibli with English and Japanese voice-overs
• ROLE-PLAYING MASTERY - A rich mixture of familiar RPG elements, expertly crafted and designed, and featuring dozens of locations to explore, hundreds of creatures to battle, and a wealth of quests and secrets to uncover
• DYNAMIC COMBAT - Switch freely between characters and familiars in an exciting battle system that combines real-time and turn-based tactical elements"

Richard R
1.0 out of 5 starsCrashtastic
24 September 2019 - Published on Amazon.com
Platform for Display: Nintendo SwitchVerified Purchase
Great game on ps3. Frame rates stable 4 hours in, and I've had 4 crashes, which wouldn't be the worst with autosave but given this is a jrpg, this unacceptable. I tried to mush through it but the crashing is absolutely random. I've had it at the beginning of battles and with video.

PurlJam
3.0 out of 5 starsBeautiful on the Switch (Not a remaster!)
21 September 2019 - Published on Amazon.com
Platform for Display: Nintendo SwitchVerified Purchase
Edited my initial score removing an additional star because of the number of crashes in dungeons and losing progress becomes quite frustrating, and no fix appears to be coming.

Initial review: I was worried about my preorder due to a negative youtube review I came across. Luckily it seems the worry was unnecessary. Ni No Kuni looks and (so far) runs beautifully. I made the right choice in not getting the Remastered version for PC or PS4 because besides portability it hasn't lost any graphical or audio fidelity like most Switch ports do. This is one of the best looking games I own and I recommend it is you enjoy JRPGs or monster capture games. I’ve had about 6 crashes in 25 hours of play.

Visuals: 11/10
Music: 10/10
Gameplay: 8/10 (Combat extremely clunky but manageable, seemingly random infrequent crashes.)
Value: 8/10 Worth the $42 I paid and all on cartridge but the crashes need a hot fix that likely isn’t coming.

BOBdotEXE
5.0 out of 5 starsA fateful port of the ps3 classic!
21 September 2019 - Published on Amazon.com
Platform for Display: Nintendo SwitchVerified Purchase
After around 9 years, Ni no kuni returns to a nintendo console!

Back in 2010 the JP exclusive 'Ni no Kuni: Dominion of the Dark Djinn' released on the Nintendo DS,
It was an ambitious title that took the typical JRPG formual, and added some twits.
It gameplay and story from Level-5, along with music and art from Studio Ghibli.

The first version we got in the USA was 'Ni no Kuni: Wrath of the White Witch', this was a full on remake that overhauled the visuals, and gameplay to offer a more 'modern experience'.
Some story segments were streamlined, and other were changed to build up the new villain 'The White Witch'

It's kinda sad that the original game was lost to time,
But it's nice to see that not only can Nintendo fans finally play the remake,
But the game finally returns to a handheld.

This game is largely the same as the PS3 version,
Still locked at 720p30fps, but with the switch forcing 1080p (even if you change the output settings)
You'll get a bit of aliasing on some diagonal surfaces.

Other than that, the game's great!
There are some slight changes to the ps3 text, but nothing that changes the story.

So if you never played the PS3 version, I'd say pick this up!
Read more
19 people found this helpful.

Kaelan Woodman
1.0 out of 5 starsBuggy and poorly optimized
27 October 2019 - Published on Amazon.com
Platform for Display: Nintendo SwitchVerified Purchase
UPDATE: DO NOT GET THE SWITCH VERSION. THE FRIENDLY AI IS BROKEN. Along with other flags in the game for specific events. I confirmed this after purchasing the PS4 version. The PS4 version is much more responsive and functional.

I played the game for a total of 10 hours before giving up and returning it. Two crashes, and twice I couldn't move in a battle. Was stuck in place for some reason.

The music is good. The visuals are pretty. The monster designs are cute, and the story is lighthearted. It's easy to pick up and play since your brain will be turned off 90% of the time playing it.

The AI is dumb as a bag of rocks. I could go into great detail for this, but suffice to say that you will continuously notice flaws in the combat system.

They had an opportunity to fix these issues with this rerelease. This is a cash grab.

Only get this game if you are patient, but don't get it on the switch. Get the PS4 version.
Read more
14 people found this helpful.

Ransford
3.0 out of 5 starsOk addition to Switch Library of Good games
23 September 2019 - Published on Amazon.com
Platform for Display: Nintendo SwitchVerified Purchase
A very heartfelt game. The beginning of the game and the cutscenes draw you in. Like some games you get bored right at the beginning but not with this one.

It has both Japanese and English voiceovers. I haven't encounteref any crashes or bugs. Game updated when I put it in the first time so maybe they fixed the problem people talked about with a patch.

Graphics wise, I play handheld only in my opinion it's very good. A slight blur here and there but overall looks great. I wouldn't say it's complete 720p coz sometimes the resolution dips a bit.

EDIT: After playing for more hours. The gameplay mechanics became very annoying, it takes the fun out of it. AI is horrible. It feels very childish in terms of story. Oh and Familiars are horrible. It's hard to pinpoint where they were going with the gameplay. I took off a star
Read more
13 people found this helpful.
Go to Amazon.com to see all 128 reviews 4.6 out of 5 stars

Platform For Display: Nintendo Switch
Free & fast delivery, movies and more with Amazon Prime
Prime members enjoy free & fast delivery, exclusive access to movies, TV shows, games, and more.
> Get started
Back to top
Get to Know Us
Connect with Us
Make Money with Us
Let Us Help You
© 1996-2020, Amazon.com, Inc. or its affiliates