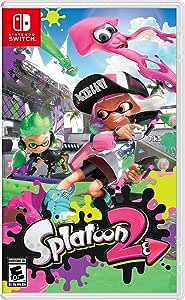 The squid kids called Inklings are back to splat more ink and claim more turf in this colorful and chaotic 4-on-4 action shooter. For the first time, take Turf War battles on-the-go with the Nintendo Switch system, and use any of the console’s portable play styles for intense local multiplayer1 action. Even team up for new 4-player co-op fun in Salmon Run!

Two years have passed since the original Splatoon game was released, and two years have also passed in Inkopolis! So expect a fresh wave of fashion, not to mention new weapons and gear. Dual wield the new Splat Dualies or stick to mainstays like chargers and rollers, which have been remixed with new strategic possibilities. As always, Turf War is the favored sport among Inklings, but they also dig ranked battles, taking down Octarians in a robust single-player campaign, and battling enemy Salmonids in one dangerous part-time job! No matter which way you play, splat at home or on-the-go with Nintendo Switch. Staying fresh never felt so good.

3.0 out of 5 stars
3 out of 5
4 customer ratings
How are ratings calculated?
To calculate the overall star rating and percentage breakdown by star, we do not use a simple average. Instead, our system considers things like how recent a review is and if the reviewer bought the item on Amazon. It also analyses reviews to verify trustworthiness.

1.0 out of 5 stars Empty box received without original wrapper.
By Lee Yeow Chong on 17 February 2020
Received today. came without original transparent wrapper. Upon opening up, it does not contain any game cartridge!!! daughter very disappointed.
Return initiated!!!

Alissa A. Wells
1.0 out of 5 stars More money over time.
14 October 2018 - Published on Amazon.com
Platform For Display: Nintendo SwitchEdition: StandardVerified Purchase
When we first purchased the game, my son was able to play online multiplayer for free. As some point, the game magically required $20 per year for online multiplayer. I guess that $20 allows online access for all of his Switch games, but this is obnoxious. Money for the console. Money for the games. Money for more controllers. Money for DLCs, amiibos. Money for online access. Gag.
Read more
91 people found this helpful

Risa SJ
1.0 out of 5 stars Buyer Beware!!! Shipped European version - now hosed for Eshop purchases for this game.
16 June 2018 - Published on Amazon.com
Platform For Display: Nintendo SwitchEdition: StandardVerified Purchase
4 stars for the game - kids love it. 0 stars for retailer. They shipped us European version. While it works on the switch... now my kids can't buy any of the downloadable content for it because it is Incompatible and Nintendo does not refund on downloads. They are very disappointed. BUYER BEWARE: there is no indication on the listing that they will ship you the European version. The photos and description are the USA version.
Read more
92 people found this helpful

Paul Bulger
5.0 out of 5 stars Kids, that are also Squids
11 February 2018 - Published on Amazon.com
Platform For Display: Nintendo SwitchEdition: StandardVerified Purchase
I missed out on experiencing Splatoon for the Wii U, so my experience with Splatoon 2 on the Switch is untampered by some complaints I've heard by people who did play it on the Wii U, namely the fact that they're calling it a sequel, though there's a sparsity of new features and overall it doesn't feel as though Nintendo heeded the feedback they received from the first game. If they had called it a "deluxe" edition, as they did with Mario Kart 8 on the Switch, rather than "Splatoon 2," I think the disappointment could have been avoided.

But luckily, this is the first experience I've had with the game, so my impressions are overall very positive, if number of playtime hours displayed on my Switch's profile are any indication, which would be 70 hours within just a month getting the game, and I don't see myself taking a break from it any time soon. I'll make a list of pros and cons, starting with the cons:

Cons:
-there really should be more modes than there are. What is there is apparently fun enough to drain 70 hours of my life throughout the course of a single month, but with only four modes (five if you include Salmon Run, which is only available on specific days at specific times), it really does make you wish for more
-the single player campaign is fine, but there really is a lot more potential for it, given that the core gameplay mechanics are so unique. And locating the actual levels in each of the five worlds is irritating
-there are a lot of different loading screens in the community area, whether you walk into a shop, walk into the lobby, walk into the Salmon Run waiting area, or equip new gear. A loading screen pops up for everything
-the game does not do a good job of acclimating new players to the different features, and things you can do. There are some things I just recently found out about (after playing for a month), such as all the different things Murch can do for you, like ordering specific gear items you like that you see players in the community area wearing, or scrubbing slots, or collecting ability chunks, etc. That's probably my fault for not going out of my way to talk to the NPCs, but I still wish there had been a more comprehensive tutorial available somewhere (maybe there is, I just have to go out of my way to find it, I have no idea. Most informative and useful things to know in this game you need to go out of your way to find out about, which is frustrating)
-that freaking "talk show" that comes up EVERY time you turn the game back on, and is completely unskippable, wasting 45 second of my life on information that can me conveyed in three seconds, makes me want to rip my hair out. What the hell was Nintendo thinking when they made that unskippable, and why the hell has there not been an update allowing you to skip it after almost a year since the game was released?
-there isn't an option to save replays of matches. The screenshot button allows you to record up to 30 seconds of footage, but there's no way I can know something awesome is going to happen before I start recording. Really wish they would include a replay feature.
-I am not convinced it is conceivably possible to win a match if one of your team mates dips out last minute. One time I got stuck on a team of three and we made it within four percent of winning, but that is the closest I've ever seen it. Typically it's just a slaughter. It isn't as if their team has an edge over you, and you're simply fighting with the odds stacked against you. Nope. You're just done.
-no split screen competition of coop. I'd love to play it with my wife, but we'd have to get a second Switch and a second copy of the game, which is a shame.

All that being said, this is still some of the most straight up fun I've ever had with a game.

Pros:
-kids that are also squids
-game mechanics are super unique
-matches can be ridiculously tense
-you play as kids, and squids
-there may be a lack of modes, but the sheer amount of mileage you get out of such few modes is amazing
-customization options are expansive, but it never feels as though other players have an unfair advantage over you because they have better gear
-First I'm a kid, then I'm a squid, then I'm a kid, then I'm a squid
-all of the control options feel good, whether I'm using joy cons, my pro controller, or handheld mode
-no lootboxes, no paywalls, no "pay to win" features. You buy the game, you play the game, the end
-so many colors
-there are kids and there are squids and the kids are also squids
Read more
65 people found this helpful

C.J.'s Librarian
1.0 out of 5 stars Not for U.S. Region
15 June 2018 - Published on Amazon.com
Platform For Display: Nintendo SwitchEdition: StandardVerified Purchase
Thanks to this seller, my son now has a game which is not correct for the U.S. region. Nowhere is this clearly stated, so beware! He can play the game, but he cannot add any expansions to the game. We discovered this only today when he purchased the expansion pack through the Nintendo online store which he cannot use and is non-refundable.
Read more
42 people found this helpful

Brian
4.0 out of 5 stars Buy this KNOWING this is a 1 player game, there is no SPLIT SCREEN/2 player mode
5 December 2018 - Published on Amazon.com
Platform For Display: Nintendo SwitchEdition: StandardVerified Purchase
Loved Splatoon 2, one of my friends recommended this game and I'm enjoying this a lot. It's very different from other shooting games because the objective is NOT to kill people, but to get the most territory for your team. I started out as level one while everyone was like level 70 which I thought was going to be an issue cause everyone seemed to have very highleveled equipment, but it all focused more on teamwork, so I was winning a lot of the matches for at least the one I focus on for territory (I learned the hard way that killing really does not mean anything)

I give it a 4 because I'm sure most parents want to play this with their kids and are expecting split screen and I don't see why they couldn't do it; however, other than that. The game was a lot of fun. Even the first player mode was a lot of fun, will be looking out to play the dlc for the game.
Read more
27 people found this helpful
Go to Amazon.com to see all 1,292 reviews 4.2 out of 5 stars
Back to top
Get to Know Us
Connect with Us
Make Money with Us
Let Us Help You
© 1996-2021, Amazon.com, Inc. or its affiliates