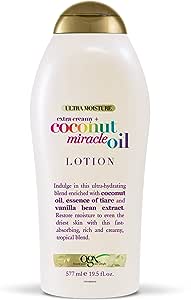 by OGX
4.0 out of 5 stars 1 rating
Available from these sellers.

OGX Ultra Moisture extra Creamy plus coconut Miracle Oil Body Lotion, with coconut oil, essence of tiare and vanilla bean extract. Leaves skin feeling soft and hydrated.With exotic, tropical notes that leave you feeling as though you are relaxing in a tropical oasis. Restore moisture to even the driest skin with this rich and creamy formula.Envelop your body in the creamiest, velvetiest, moisture you have ever felt.

We approach beauty in our own way, pure and simple.

Originality inspires us, that’s why we love being different; from our exotic ingredients, to the shape of our bottles, to our quest for sustainability — we approach beauty in our own way.

Envelop your senses in a tropical escape with this ultra-hydrating body collection enriched with coconut oil, essence of tiare and vanilla bean extract for an island getaway in the shower.

4.0 out of 5 stars
4 out of 5
1 customer rating
How are ratings calculated?
To calculate the overall star rating and percentage breakdown by star, we do not use a simple average. Instead, our system considers things like how recent a review is and if the reviewer bought the item on Amazon. It also analyses reviews to verify trustworthiness.

Fat Charlie
4.0 out of 5 stars Ok only, no fragrance at all
16 December 2019
Flavour Name: Lavender Essential OilSize Name: 19.5 Fl Oz (Pack of 1)Verified Purchase
Fragrance it little to almost no smell of lavender, the texture of the lotion is extra thick. Id say it only lightly moisturising after you pat and dry off. Suitable for hot weather country.
Read more
Helpful
Comment Report abuse
See all 1 customer reviews
Write a customer review

Amazon Customer
5.0 out of 5 stars SOFTENS THE WORSE WINTER SKIN
15 December 2017 - Published on Amazon.com
Verified Purchase
I have very dry, ash skin (always have). Winters in the tundra have always been rough. Originally this body wash was purchased accidentally (someone didnt close the Amazon app before letting little fingers play on my phone). We happen to be low so I thought, "Why Not?"

This wash didn't miraculously transformed my old ashiness into the supple skin of a 20-yo, but i did find that after a few days my skin would soak in more moisturizer (same brand I always use), and after a week that dry itchy feeling had gone. After a month there is a slight but noticeable change to the look of my skin. My husband has noticed a dramatic change to the way my skin feels.

If you are in the market for a moisturizing wash that changes your skin for the better after each wash--- I strongly recommend this OEX Body wash.

Danielle Booth
5.0 out of 5 stars Former lotion addict--this is literally awesomesauce
5 August 2018 - Published on Amazon.com
Verified Purchase
I used to be a lotion addict, different formulas, different scents, perpetually unsatisfied, Goldilocksing my way through half of Lotiondom. No longer! This stuff is crazy awesome! Reading reviews here, I discovered you're apparently supposed to use it in the shower...no thanks! I have tried the Coconut Miracle Oil body wash, and it's all right, too, though I prefer Archipelago Botanicals coconut milk body wash (it's expensive but the big bottle lasts me 6 months!) and a coconut milk body scrub (don't worry--I diversify with deodorant and perfume). This product, originally meant to try on my red-bumpy arms, has taken over my entire body.

If you LIKE coconut smell, you'll like the way this smells. I recommend putting it on after towel drying, one or two spritzes to each area (I use 2 pumps to biceps, one to forearms, two to each calve, etc.) and simply rubbing it into the skin...quickly! It dries fast and doesn't leave a slippery, greasy residue like SO MANY lotions and oils do, which is honestly what got me so obsessed with this stuff. It also lasts a really long time.

For those who receive bottles with defective pumps, either exchange it as a defective product or get a small plastic spray bottle and pour it into that? I used to use Coochi spray on the post-shaved areas of my body (now, of course, usurped by this product), and both bottles of that I got were nearly impossible to spray, so I just got a wee bottle of my own. After all, it's what's IN the bottle that counts, and c'mon...what's better than being a non-greasy, ultra-soft, beachy/exotic-smellling vixen all day?
Read more
184 people found this helpful

SandiBeachz
5.0 out of 5 stars MY HEAVENLY COCONUT GENIE IN A BOTTLE...
23 February 2019 - Published on Amazon.com
Flavour Name: Coconut Miracle OilSize Name: 19.5 Fl Oz (Pack of 1)Verified Purchase
This was my first time purchasing a coconut water/milk based product from this line. I've purchased several other product lines/scents from the same brand and have always been happy with my purchases. Coconut is my MOST FAVE scent and this moisturizer does it just right...this scent is truly HEAVEN in a bottle without overpowering you. The lotion moisturizes well and does not leave a heavy, sticky or watery residue. It melts into your skin and keeps you moisturized for hours. It is a wonderful body lotion though I would not apply to the face (personal preference). If you want a hint of beach or summer during Winter or Spring this is your "go to" product!! 5 STARS x INFINITY!!
Read more
88 people found this helpful

BadgeBunnyV
5.0 out of 5 stars Heaven in a bottle
23 January 2018 - Published on Amazon.com
Verified Purchase
This has to be the most dreamy smell EVER!! Not a straight coconut smell. The Tiare smooths out the coconut giving it a more sophisticated fragrance. I find it moisturizing and my bathroom smells amazing after I shower.
Read more
124 people found this helpful

HighMaintenanceHippi3
5.0 out of 5 stars Smells amazing.
13 December 2017 - Published on Amazon.com
Verified Purchase
I recently tried the OGX coconut miracle shampoo  OGX Extra Strength Damage Remedy + Coconut Miracle Oil Shampoo, 13 Ounce  and conditioner  OGX Extra Strength Damage Remedy + Coconut Miracle Oil Conditioner, 13 Ounce  on a whim when I needed a shampoo and conditioner to leave at my parent's home. My opinion in regards to shampoos and conditioners is they're all the same, more or less (this is coming from a beauty JUNKIE who tries EVERYTHING) and not worth a splurge because of this. I was blown away by the coconut miracle after ONE use and regretted leaving them in a different state, wanting to use them again sooner!

That said, this entire line- which includes the shampoo, conditioner and hair oil, as well as the body wash and lotion- smells exactly the same, and it is AMAZING. I will continue purchasing all of these items, based on scent alone; however, they have the added benefit of actually working well and providing you with quality results.

I appreciate that this body wash is sulfate-free, though that would not be a deal-breaker for me if it weren't. It cleanses well without drying out my typically dehydrated skin, which is all I could really ask for in a body wash. I hope they never discontinue this line!!
Read more
126 people found this helpful
Go to Amazon.com to see all 2,025 reviews 4.4 out of 5 stars
Free & fast delivery, movies and more with Amazon Prime
Prime members enjoy free & fast delivery, exclusive access to movies, TV shows, games, and more.
> Get started
Back to top
Get to Know Us
Connect with Us
Make Money with Us
Let Us Help You
© 1996-2020, Amazon.com, Inc. or its affiliates