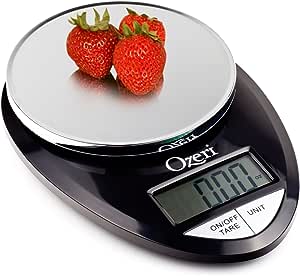 The Ozeri Pro Digital Kitchen Scale in Chrome is designed for the culinary perfectionist who desires the superior accuracy in function and elegance in form. The Ozeri Pro Digital Kitchen Scale incorporates oversized buttons that generate an audible click confirmation for the fast-paced cook, and an automatic Tare button that quickly calculates the net weight of your ingredients by subtracting the container weight, whether the container is a bowl, tray, plate or anything else. The scale's weighing platform is finished in an elegant chrome color, and has a capacity range from a mere 0.05 ounces to 12 lbs with a precise graduation of 0.05 oz or 1 gram. The scale also displays results in both the US and international metric systems (grams | ounces | pounds | kilograms). The large screen features a new bright LCD with an improved viewing angle for the on-the-go cook. The Ozeri Pro Digital Kitchen Scale in Chrome also includes a 3 minute automatic turn-off that preserves battery life while giving you time to confirm each measurement. Ships with 2 AAA batteries included.

Jackrbike
5.0 out of 5 stars EATSMART VS. OZERI SCALES--WHAT YOU NEED TO KNOW IS. . .
20 December 2011 - Published on Amazon.com
Colour Name: BlackVerified Purchase
FEB 11 2018 UPDATE EDIT
PBS TV show America's Test Kitchen recently tested kitchen scales and fount a Cuisinart scale (4x more costly) to be first choice, then named this scale as a suitable accurate less costly alternative. I've bought several of these scales as gifts and all are still working fine.
NOV 9 2015 EDIT:
Both scales are still working fine, and are used regularly. I called the giftee, and there are no problems. I see that Ozeri has another similar scale with a larger surface and a wider front, with buttons on the side. So, upon reflection and unreported originally, I find the narrow front makes it very easy to grip and place upon the cabinet shelf (on seldom used serving dishes). Further, I suspect that the bigger the scale gets the more annoying will be the problem of storage. The original tape I placed over the readout is still intact and clear, and, I like the larger size of the buttons on this model compered with the newer one. My recommendation: get this one.
___________________________________________________________________
Original:
1. The EatSmart Precision Pro Digital at $25 (12/11) and the Ozeri Pro Digital at under $20 scales are IDENTICAL. I have both, having had the Eatsmart for at least three years, and the Ozari I bought as a gift and tested it. One is black with a chrome-finish platform. The other is silver with a chrome-finish platform. The black body looks as if it is black plastic throughout; the silver body finish might possibly have been painted or otherwise applied (It's description says Elegant Chrome, but just the platform and buttons have a chromed finish.) Personally, I prefer the black, available in both brands.

2. The readout is large; you don't need glasses. It is not backlit and is a problem only in a dimly lit room--solved by turning a light on.

3. The clear plastic covering the LED readouts is recessed slightly from the body of the scales. Flour, spices, and liquids could conceivably get on the clear cover and in the corners, creating an annoyance and the necessity of occasionally cleaning the recessed edges. The solution I found was to put a strip of clear packing tape over the whole lens area, flush with the scale body and not pushing the tape down onto the clear plastic. Cleaning is now a simple wipe.

3. The auto-turn-off period after registering a weight or momentarily tapping the weighing platform was within seconds of the three minutes specified, and differed between scales only slightly. This lag between registering a weight and auto turnoff is extremely important; do not buy any scale that does not have such a lag or does not specify a similar or longer lag time!

4. For light weights and for a five pound weight they each gave the same accurate results. A nickel (US) is 5 grams even, and can be used as a test of your sample's accuracy, Use one, then use ten, for 5 and 50 grams, and more if you wish. Regardless of WHERE on the platform I placed a stack of ten nickels, the weight registered the same for both scales.

5. Contrary to one popular review of the Ozeri: a) The scale in fact turns off very easily: CLICK THE TARE BUTTON ONCE TO GET THE SCALE TO READ ZERO, THEN CLICK IT AGAIN TO TURN IT OFF! I confess it took me a month or so of using the scale before that pattern occurred to me. b) Treat the scale reasonably and it will last a long time. My Eatsmart version is still going strong.

6. The 5 1/8" diameter platform is sufficient for most uses, but when using a dinner plate to expand the platform size (taring out the plate's weight) I have to lower my head somewhat to "get at" the reading, because the edge of the plate hides the readout, preventing a reading from directly overhead. A larger diameter platform scale at times would be nice, but such would present a problem for convenient cabinet storage. Using a bowl instead of a dinner plate, or putting a plate on top of a bowl makes the readout easier for large volumes or weights.

8. The scales work fine with rechargeable batteries. Battery life is reasonable, regardless of the type of AAA battery you use.

9. Both scales came with a book of calorie equivalents.

10. I appreciate the large buttons and the reassuring audible click when they are depressed. Small point, perhaps, but that's how I feel about them.

11. Just the platform and buttons have a chromed finish on plastic. The "chrome" is not hard metal, though the pictures might lead one to think it is.

Things I've learned that you may find useful, though not relevant to any particular scale:
Using a scale guarantees me a consistent cup of coffee. Measuring coffee by volume can be deceptive, depending on the type of grind and type of roast. If kids argue over who is getting the bigger portions of a particular dish, give 'em the scale and let THEM adjust the quantities for "fairness"!* I've found that standardizing on a cup of flour of 4.8 oz works best with most recipes. If you measure by the level cup, you'll find that a "cup" can equal from 4.3 to as much as 5.4 ounces. 2 grams of loose tea equates with most teabags and the cruder measure of one teaspoon, commonly suggested for one to two cups of tea.

*OR, let the complaining child divvy up the food in equal portions, but the non-complainers get to pick before the complainer!

backdoc
2.0 out of 5 stars Constantly Loses 1g of Weight
13 October 2019 - Published on Amazon.com
Colour Name: BlackVerified Purchase
This is a simple no-frills scale that is generally okay overall, but it has one annoying fatal flaw. It constantly loses 1g. In most cases, 1g probably isn't that big of a deal. But, you never know if you can trust the weight after using the tara feature. If you aren't using the tara, you can see the -1 displayed after removing the item from the scales. But, if you place a bowl on it, then zero out the weight of the bowl and then add food, you can't tell if you lost a gram because the display won't be -1, it will be approximately the weight of the bowl. I already owned one exactly like it under a different brand name. I didn't recall that being a problem. I bought this second one to replace a Soehnle (https://www.amazon.com/gp/product/B000JG4C2W) that I didn't like because it constantly timed out too early. Anyway, it's annoyed me to death. So, I bought an Escali to see if it is any better. I think that's the brand Alton Brown uses (my hero :-) ).

I’ve edited this review to show how when you way something, it can’t settle on a number, then after the item is removed, it’s off by -1. This is almost every time I use it.
Read more
3 people found this helpful

Sijia Zhang
3.0 out of 5 stars Decent customer service, but not very precise.
11 July 2016 - Published on Amazon.com
Colour Name: BlackVerified Purchase
January 2018 Update:
I've knocked it down a star because it just isn't precise. I measured out what I thought to be 15 grams of salt using the scale, and then thought about it and tested the gram measurements with water in a container (Yes, I did press tare after putting on the container, and THEN I poured the water.) 350ml of water shows as 330 or so instead, so I might have oversalted my pizza. Pretty disappointing to be honest.

Update: I contacted their customer support and they sent me a replacement after I showed them the invoice and the pictures showing how it's defective. The new packaging is actually quite nice, it's a huge upgrade from what I remember. It was well protected, with there being two boxes keeping it safe. They included a calorie guide and warranty for the replacement too. It came with batteries this time, so I was able to test it immediately. No issues so far, will revise my review again after using it more!

Will make 5 stars if this one doesn't break. :P

Original:
Pretty disappointed as I bought it and forgot to use it for a few months. Today I put in some batteries, and the display is malfunctioning. I'm not sure if it even measures weight currently as a lot of the numbers are missing lines, i.e. the 7s are missing the top "--"s. It also stays at a negative number when there is no weight on it.

I've switched batteries and double checked to see if my batteries were on correctly, to no avail. Really hope I can get a replacement or something, to see if it's just a defective product.